Gold – the opposite of growth?

Gold – the opposite of growth?

I’m currently back in Scotland visiting family, so it’ll be a short note from me today.

But gold has flared up again in recent times and Charlie Morris has been quick to detect the change in trend over at The Fleet Street Letter.

I’ve yet to meet anybody who can model markets like Charlie can, and his insights on precious metals are always worth paying attention to. I share a small snippet from the latest issue of The Fleet Street Letter below.

Gold is the opposite of growth

Then again, at the gold peak in 2011, the seeds were sown for a surge in growth stocks. It stands to reason that if the recent dent in growth stocks is the start of something bigger, then the outlook for gold should improve.

A peak in growth is good for gold 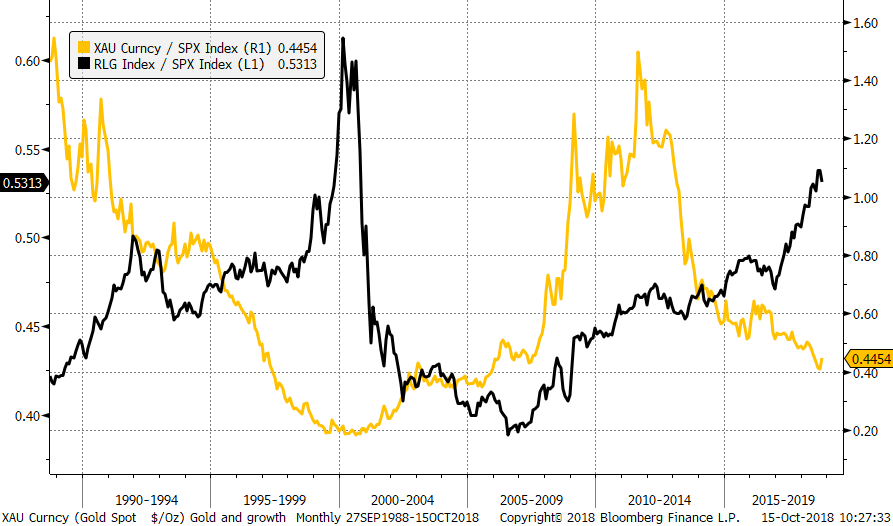 No correlation is perfect, and this is as good as it gets. You might observe that growth did well between 2008 and 2011, when on this theory alone, it should have been weaker. But consider that growth was very cheap at that time, and fundamentals on the ground swung into action.

Both the biotech and internet sectors transitioned from being serial money losers, to becoming some of the most profitable companies in history. Even interest rates going in the wrong direction can’t keep a lid on such a turn in events. That said, gold still managed to outperform growth over that period, despite no profits or world-changing inventions.

In 2008, investors doubted whether the internet would take off on mobile phones; at least that was the view until the app store came along. The consensus was dead wrong. But roll the clock forwards a decade, and you have to presume that much of the good news in growth stocks has now been priced in. Can you imagine a ground-breaking new tech trend from here? Other than bitcoin (and its friends), I can’t. And let’s face it, bitcoin is off-grid.

While all of this exciting new consumer technology has been disrupting the status quo, gold has been forgotten. That has brought the price back down from bubble levels, to fair value.  And if growth stocks have peaked, then there is plenty of room for gold to rally.

I constructed this fair value model several years ago on the logical assumption that gold can be modelled as a bond. Following that reasoning, it approximates to low-coupon (ideally zero) 20-year inflation-linked bonds issued by a credible government (assuming you can find one of those). It assumes that inflation is the long-term tail wind for gold and future expectations for interest rates and inflation provide a fair price for what investors should rationally pay for gold today. The current price is $2 off fair value, which means that sometimes my models get lucky. It’s not always that accurate.

Gold is trading at fair value 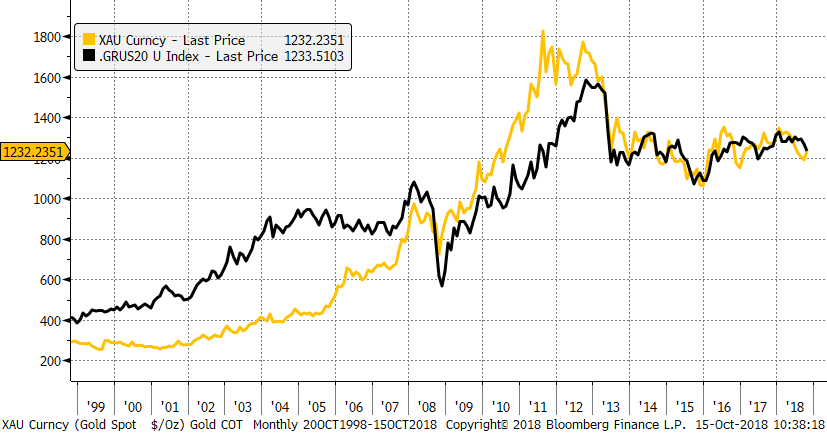 The gold price was significantly undervalued up until 2005, when it began to catch up with events. Gold fell in late 2008, at least in US dollar terms, as inflation expectations collapsed (a deflationary shock caused real rates to spike). It then surged into 2011 as real rates fell, as inflation recovered while bond yields dropped to 1.4%.

Gold crashed in 2013 during the taper tantrum as real interest rates rose again. That is, bond yields rose while inflation remained contained. And since that time, gold has been trading in line with the message coming from the bond market.

We have been living in a tightening cycle, which has seen the Federal Reserve hike rates eight times from 0.25% to 2.25%; a trend that is currently expected to reach 3% or even higher.

Gold doesn’t mind rising interest rates, provided they are accompanied by rising inflation; as seen during the 1970s. It’s when inflation remains stable that the pressure starts to mount.

The trend since the gold peak in 2011, has seen bond yields climb from 1.8% to 3.2% while inflation expectations have barely changed. That has meant real interest rates have risen from circa -0.8% to +1.1%, which has put downward pressure on the price of gold.

The good news for gold is that as the US ten-year yield has risen above 3%, inflation has followed. This has caused a seismic shift in the Treasure Map from a growth environment to a value environment.

That reflects a number of things, but most visible has been the recent strength in the oil market, which is being egged on by geopolitics…

I’m afraid I can’t reveal more of Charlie’s analysis in this letter. But if you appreciate his insight I’ve shared with you here, then I’m sure you’d enjoy reading the rest of the issue which features Charlie’s analysis of the market in gold miners, the possibility of a speculative “short squeeze” in gold futures, and whether Charlie sees a bull market in the metal ahead.

With markets running wild after years of low volatility, Charlie’s a man you want on your side if your aim is to protect and grow capital over the long term. Click here to find out more about his strategy.