I hope this letter finds you in good health, and having a great Sunday. I don’t normally write to you on weekends, but felt I had to make an exception today. For today is a very special occasion – a 50-year anniversary, no less. And if you enjoy my scribblings to you at all, I reckon you won’t want to let it go unobserved.

Today marks the golden anniversary of an event which shaped the world around us today in more ways than any can imagine. The financial world is just where it began – “ground zero” – but its influence stretches so much further afield. This affected – and continues to effect – everything which has a price, and every behaviour which prices can influence… everywhere.

Yes dear reader, today marks the golden anniversary… of something totally unlike gold. It’s the 50th anniversary of the fiat money world we now live in.

It was the evening of 15 August 1971 when President Richard Milhous Nixon interrupted a repeat of Bonanza to declare that the US Treasury would no longer be backing the dollar with gold. The world was awash in dollars – American banks were lending (creating) new greenbacks without constraint abroad, and the Vietnam War was burning an ever-bigger hole in the US Treasury’s pocket.

Foreign governments had begun to wonder if there really was enough gold in the vaults of Fort Knox and the Federal Reserve to back every dollar with a 35th of an ounce of gold… and some had begun to call its bluff.

Earlier in the month the French Navy had arrived in New York harbour to collect bullion after the French government had redeemed their dollars. And it was us Brits who pushed the Americans to the limit, asking the US Treasury department to redeem $3 billion in gold bullion the week before on 9 August. If the gold drain continued, the US would have none left. Nixon opted to pull the plug entirely.

As I’ve commented before in this letter (What should Nixon have done in 1971? – 12 Jan), there’s not much Nixon could have done to maintain the gold standard – the rot of devaluation had already set in by the time he came to office. But one cannot ignore the decision he made 50 years ago today. The website WTF Happened In 1971 has a neat collection of evidence to show you just how distorted the world economy has become since the value of money was unhooked from reality.

Nixon said it was a temporary measure. Maybe he wasn’t lying, just taking a very long-term view. Whatever the case, if we do see a gold standard again, it’ll need to be a much “higher” standard. For there’s an awful lot more money out there, and gold is an awful lot more expensive than $35 an ounce: 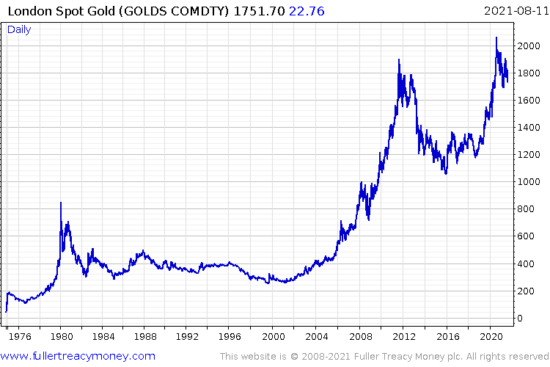 It’s worth bearing this chart in mind when one thinks of the selloff from last weekend, and those who would describe gold as unfit for purpose in the modern age.

And it’s worth looking at this one chart – courtesy of GAM – when one contemplates the future value of paper money. No government – not the Germans, those so rightly fearful of inflation… nor the Swiss with their franc “as good as gold” – has been able to keep inflation below 2% since 1971. Hell, even Burkina Faso is better at defending its citizens’ savings than the UK: 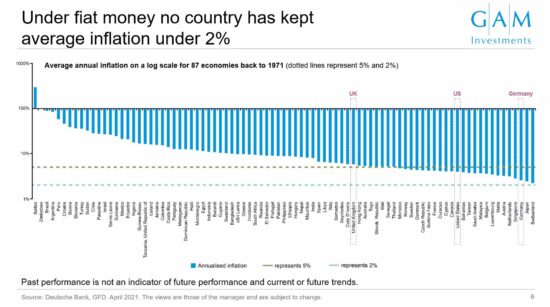 Let me ask you this on this fateful anniversary: do you think governments are going to get any better at this? Do you think the value of paper currencies are safer now than they were over the past 50 years? Do you think the modern state will become a better steward of its citizens savings in the face of a grossly indebted world, a pandemic, and whatever else the 2020s have in store for us?

I don’t. And that’s why I own gold. But you already know that.

I encourage you to reflect on the consequences of Nixon’s interruption of Bonanza tonight.

I would suggest a golden ale to mark the occasion, but I leave the decision to you.