We’re thinking of buying a load of beer here at Southbank Investment Research. Not just for us, mind – but for you too.

It started with the news story that MPs in the Public Accounts Committee had recommended the Bank of England (BoE) be converted into a Wetherspoons. The idea was subsequently rejected by the BoE as maximum security vault + drunken revellers tends not to mix.

I must admit, inside I feel disappointment – the Brown Bottom would be such a good pub. But my colleague Nickolai thinks we can keep the idea alive if we commission a brewery to make a fine golden ale of the very same name for our fine subscribers.

And the idea is getting traction in the office. We may well see another Brown Bottom, not in the gold market this time, but in the beer market in the near future.

The current label concept is a caricature of Gordon Brown stuffing gold bars into a wood chipper, and pound notes flying out the other side. If you’ve any suggestions on this project to create Britain’s best finance-related beer, I welcome them: boaz@southbankresearch.com.

The Brown Bottom, when Gordon Brown sold almost 400 tonnes of the UK’s gold in exchange for fiat currencies (including the euro, a currency so safe that a decade after it was introduced in Germany, the Germans were printing Deutschmarks again in preparation for its collapse), already looks terrible in retrospect and we reckon that decision is going to look progressively worse as time goes by.

If you’re new to gold, or have never quite understood the attraction of it, consider this.

Central bankers are tasked with preserving financial stability maintaining confidence in the financial system. As a result, they aren’t allowed to say when they’re really afraid about risks in the financial system, as that would cause a loss of confidence in the very same system which they’re trying to defend (see Janet Yellen, claiming there would never be another financial crisis in her lifetime and then giving grave warnings about the state of corporate lending once she’d left her post at the Federal Reserve).

They have to watch every word they say in public, as each one will be endlessly examined and cross-examined against everything else they’ve said in the past. This relentless examination is by traders, bankers, businessmen, government officials and even algorithms who are just dying to know what the guy at the printing press is gonna do next.

These guys have no limit to the amount of currency they can print. In a way they’re only really limited by the number of things out there they can buy. In theory they could buy anything if they believe the situation demands it… provided the person selling will accept their currency for it (pounds from the BoE, dollars from the Fed, euros from the European Central Bank, etc).

The men at the helm can’t tell us how they really feel, unless they believe it’s sunshine and roses on the horizon. They’ve got a limitless chequebook, and in theory, could buy anything. And right now, they’re buying gold hand over fist: 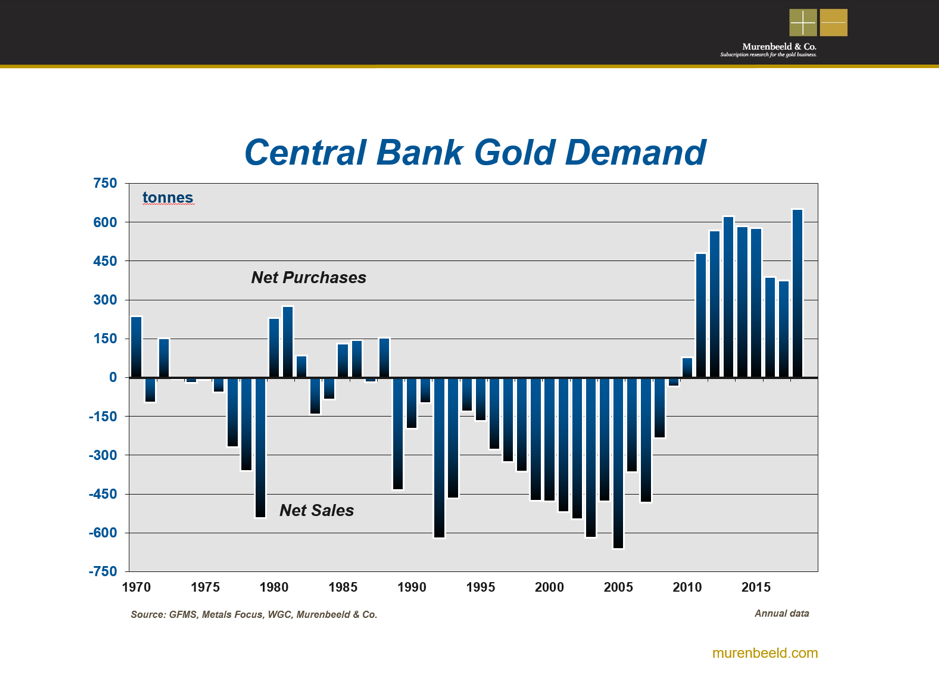 Now, I’ve shared this chart before, but it bears repeating. It reveals that Brown probably wasn’t the only guy selling at the bottom. He stood shoulder to shoulder with the average central banker, who not only sold at the bottom, but sold during the boom too – right until the financial crisis.

Since then there’s been a sharp about-turn from the folks at the printing presses; they’re now buying gold like its 1968, buying more last year than they have in 50 years. And as you can probably guess, 1968 was a damn fine time to get into gold.

Our 2019 Gold Summit is nearly at its conclusion. I’ve had some incredible conversations with gold experts from all over the world who’ve delivered razor-sharp insight as to what’s really going on behind the scenes.

My colleague Eoin Treacy has also taken the opportunity to launch a brand new service, scouting out the finest speculative opportunities in the mining sector. Have no fear if you’ve not trodden in golden territory before. Eoin’s created the service with total newcomers to the gold space – and not just fully fledged gold aficionados – in mind.

Until midnight tonight, you can access it all for a 63% discount. Click here to get in before the offer closes.