THE HANGING BAT, EDINBURGH – At long last, I’m back in my favourite pub.

Edinburgh is pleasingly lively – not so beaten down by the lockdowns as I’d feared.

It’s been a couple years since I’ve been back here, and my recent time in England has made me careless. I made a cardinal error over the weekend when I forgot that alcohol cannot be bought from supermarkets in Scotland after 10pm, and I was left high and dry post-pub. Considering so many drinking sessions in my youth were organised round that 10pm cut-off point for alcohol sales, I really should have remembered. Never again, dear reader, never again…

It’s been interesting to look at the pub stocks recently. Using JD Wetherspoon and the smaller Marston’s groups as a proxy for the sector, things are looking a lot better than they were a year ago… but still not as good as pre-WuFlu: 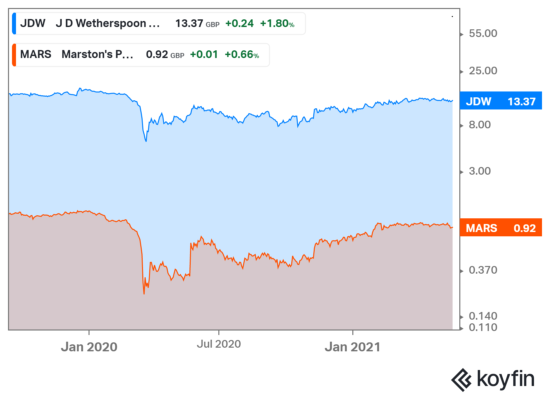 Considering the remaining Covid restrictions, it makes sense that things aren’t “back to normal” for the pub stocks, but it looks like they’re getting there.

But what does a “return to normal” really mean for investors? We’ve seen some wild speculative action take place over the past year – not only in the shares of companies which benefit from lockdowns like Zoom but in stocks which are brutalised by lockdowns too, like Hertz. Later on in the year this speculative wave made it to the crypto space, where the price action became as extreme as it only can in crypto.

But as you’ll likely be aware, last week saw a brutal wave of selling take place across the digital asset space. Is capital leaving such speculative sectors now that “the real world” is coming back online? Our resident crypto expert Sam Volkering reckons we’ve not reached the end of this crypto cycle yet…

I’ll be sharing my thoughts on the crypto wash-out later this week. But as I’ve argued in previous letters, I believe a return to normal for the everyman will mean the return of inflation for the economy. The arrival and persistence of inflation will come as a shock for many investors, as it’s a force they have not had to deal with in over a generation.

A great confluence of factors has kept inflation low in recent decades: from ageing demographics thinning the appetites of consumers, to greater debts reducing their ability to consume, and globalisation lowering prices across the board.

But as I’ve argued in this letter, not only do I think inflation is back, I think it shall persist. And that’s one of the reasons my company pension is totally concentrated in only one sector: gold mining.

As this industry remains niche – especially for large investors – there was only one fund available for me to select within our pension scheme: the BlackRock Gold & General fund.

To be clear, I don’t advise anybody follow my example as this is a very high-risk strategy, and as I’m relatively young I have room to recover if I discover this to be a grave error in hindsight.

But I was interested to find that many readers own this fund too, or have owned it in the past…

I’ve been invested in Blackrock Gold & General for years myself. Can’t agree more with your sentiments. It’s been in the doldrums for a while but I’m pretty patient.

Enjoyed the gold summit very much. Thank you for laying it on. As for your pension fund, relax! I am 75 years old and have owned that fund for about 15 years, including in my SIPP. Watch it fly after the next crisis.

I am a lot nearer retirement than yourself but I have had a healthy exposure to the same Gold Fund for about 6 years now and it is one of my best performers. During the pandemic I have taken the opportunity to top up even further as I strongly believe the Gold Miners sector is going to really take off over the next 2-3 years. I know it’s high risk but I balance that out elsewhere in the portfolio.

Smart move. I’ve owned it in the past and made money. Just invested in smith and Williamson global gold but intend to load up on the BlackRock fund also. Good luck?

I’m just turned 57, and interestingly, this time last year I put 40% of my pension funds into the very same Blackrock Gold and General Fund. I’m retiring at the end of September and fully intend to keep invested in this fund for the foreseeable future, whilst drawing down a small amount regularly. For what it’s worth, I consider that, in this current climate, this fund is as safe an investment as any, provided you can cope with the volatility, and could very likely generate spectacular results (hopefully!). I fully approve of your boldness!

That’s a very bold move indeed if you’re planning on retiring in September. In fact, that’s much riskier than what I’m doing – while I may have allocated 100% of my pension to this fund, I can sustain decades of market volatility before I come to redeem it.

The gold market can be a very cruel mistress indeed – so I do hope you can cope with the volatility as you say. I would hesitate to say that this fund is as safe an investment “as any”, considering some of the casualties in the mining space over the past couple of decades, but I would apply that description to holdings of gold bullion.

Interestingly, 40% was the magic number for another reader…

And I thought I was crazy! I’ve been invested in Blackrock Gold and General but not as heavily as you. “Only” 40% of my retirement portfolio. However, I believe this gold bull market has very long legs and I don’t intend to rebalance very often. Now that I think of it, this strategy is not too far off from yours with regards to craziness…

Other readers think I’m being “suckered”:

I, too, got suckered into BR Gold & General. In comparison to miners and other gold related investments it has done [very] badly over the last decade for everyone but the managers of the fund. I’m hanging on for a decent exit point. Suggest you do the same.

You will regret it. I have made a lot of money investing in gold, I started in 2001, but very little using Black Rock. In terms of gold funds it has the worst record of any in the last 20 years, however I am assuming this is just a pump and dump scheme, in which case you may do OK.

How exactly is this a “pump and dump scheme”? Considering the fund in question is £1.3 billion in size, you would need an awful lot of money to manipulate its price…

Thank you for all your responses. I’ve had a great time reading them all, both positive and negative. I’ll share a few more in future letters, but before I go:

Is your investment into Blackrock [Gold & General] brave or stupid? I have the answer: About a third of my portfolio is there and the answer varies by the day!