WINDERMERE, LAKE DISTRICT – The Statue of Liberty was arriving in New York Harbor…

While George Eastman (who would later create Eastman Kodak) had just begun selling curious spools of photographic film to those interested in creating “motion pictures”.

The year was 1885. And at some point amid all the action, this gold sovereign was minted: 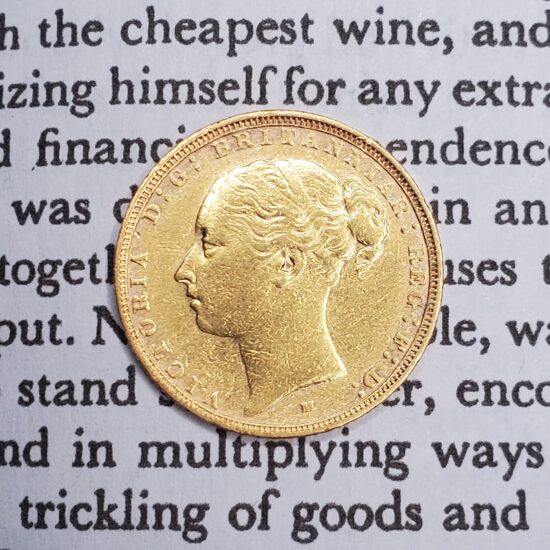 Source: editor’s own
Queen Victoria was a fair bit older than this portrait might suggest by 1885. Her portrait would be changed on sovereigns two years later for her Golden Jubilee.

See that small “M” beneath Queen Victoria’s neckline? That’s a “mint mark”, indicating this coin was minted in Melbourne, Australia – a city only established 50 years earlier. I dread to think what the Aussies were doing at that point, but one way or another this sovereign has endured life in the bush – and 136 years later, it’s in my pocket.

I told you in Rock of Ages how I’d fallen for Victorian sovereigns. They cost a fair premium above their melt value (you’re looking at >20%), but there’s something about the history that goes with them that I can’t resist. And as I take such a bullish view on gold over the long term, the premium doesn’t really bother me. Why so bullish? Well, I’m glad you asked – tune in to our Gold Summit today, and you’ll find out.

To start us off, I’ll be interviewing John Butler – economist, investor, former Wall-Streeter and the author of The Golden Revolution – on the future of the yellow metal. John’s vast knowledge of gold’s history is second to none, and he’s intimately familiar with the structure of the gold market itself, which makes his insights unmissable.

Then later on, a guest from our 2019 Gold Summit – the wise Grant Williams – will be returning, beaming through from sunny South Carolina. Grant’s witty and pragmatic approach to gold made him an especially popular guest at our last Summit, and I’ve no doubt the readership (and myself) shall be just equally entertained and informed this time around.

My interviews with these two gold experts will be going live today for a limited time here – don’t miss ‘em!