A beating and a bright side

A beating and a bright side

Happy Hump Day. That storm sure arrived soon enough. Thunder is grumbling constantly from the horizon as I write this, and the dark clouds are coming closer – but it’s not hit me yet. I’ve not seen any lightning or felt any rain, but it’ll be time to head inside soon.

It was only a few days ago that New Zealand became the darling of the press for reaching 100 days with no domestically transmitted cases of “the ‘rona”. But the WuFlu storm has returned, and the Kiwis’ largest city – Auckland – is now locked down once more.

The spectre of “The Second Wave” looms large. And as I’ve been writing to you for the past couple of days, our analyst Nickolai Hubble thinks you need to pay attention to it. Considering the immediate impact the last set of lockdowns did to markets, banks, and physical cash, it’s a possibility worth paying attention to. If you haven’t read it yet, take a look at his compelling thesis on the matter – and get access to his investment recommendations to hedge against such a scenario – here.

But I want to know your views on this. I promised you a quick and easy poll yesterday and here it is…

Do you think we’ll have experienced another UK-wide lockdown before the end of the year?

I’ll publish the results later on in the week, once this has been out for a little while.

Just as the storm has yet to strike me as I write this, the stockmarket has yet to be hit hard by the prospects of “WuFlu Part II” – but the mildest of winds may be whispering its arrival…

I mentioned yesterday that gold was finally taking a breather from its rally higher – as of this morning we’re looking at prices of £1,470/$1,917 per troy ounce. I told you we’d get a shakeout, and now it’s arrived – the question is, how long does it last?

The catalyst to break gold’s violent run higher looks to have been the modest rise in bond yields (interest rates on government debt) in recent days. The less interest investors can earn on “safe” government debt, the more attractive gold appears as an investment. But when interest rates rise, gold becomes less appealing, as of course it does not pay any interest.

Believe it or not, that tiny uptick on the bottom right means a lot to the world: 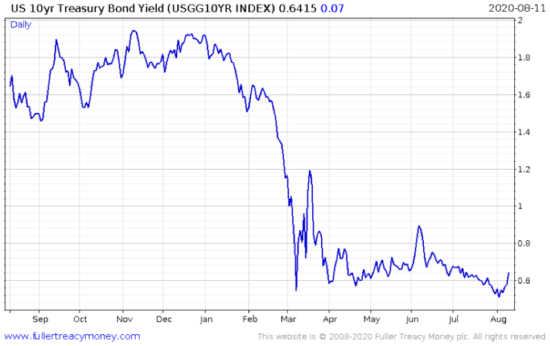 For one reason or another, the bond market is no longer interested in lending to the federal government at all-time low interest rates as it was at the beginning of this month. This could be in anticipation of the flood of debt the feds will need if a “second wave” arrives. Ain’t no such thing as a free “stimulus cheque” – it’s all gotta be paid for, and an awful lot of it comes from the bond market above. And bond investors, who are ultimately lenders, don’t like giving away money for free.

Government borrowing rates will not be permitted to rise very much, but while they do, gold will be taking a rest from its wild moves higher in recent weeks. And silver of course will be doing the same, but more so. As Charlie Morris amusingly opined yesterday:

Silver took a beating today. Think on the bright side. We’re back to last week’s price.

This is just one of the shakeouts and pullbacks that occur during bull markets in precious metals as far as I’m concerned – there’ll be more of them in the future but the ultimate direction is up.

That tiny uptick on the chart may look small, but the ripple effects of higher borrowing costs now may be grave indeed for large companies floating with bankruptcy and relying on the debt to keep their business afloat. I think that while higher interest rates have whacked gold with the first swing, I think they’ll swing again and hit stocks next.

The Nasdaq, the US stockmarket index full of internet companies which has ascended with fury in its wings in recent months, has flagged over the last few days – perhaps it’s hinting at this.

However, if stocks do get whacked, I expect much of the narrative conjured around the action will be that it’s all down to Joe Biden’s running mate, Kamala Harris. It’s election season good and proper now, and the fever surrounding it is only going up from here…

PS In case you missed it, the interest rate/gold connection ties back in to what we were exploring on Monday, with the chart that argues real interest rates (with inflation subtracted from the figure) have been falling for 700 years, boosting gold all the while (Pension for an immortal – 10 August).