ESPRESSO HOUSE, STOCKHOLM – A new week beckons: let’s start it off with the results… 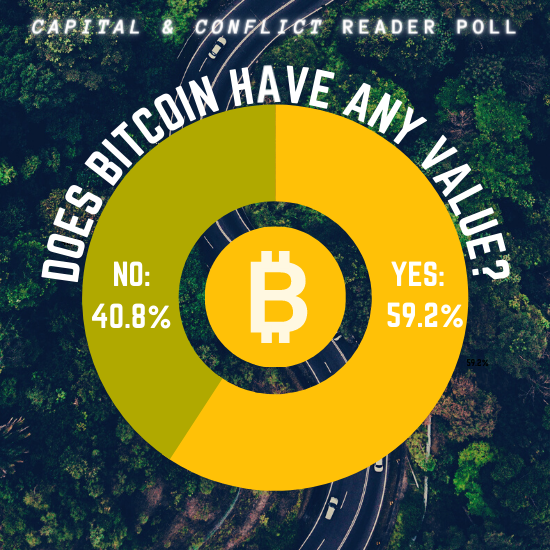 Looks like most of you think bitcoin does have at least some value – though there’s a significant minority who think it doesn’t. Fascinatingly, the divide here is only 0.1% off the results from our last poll, when I asked you if you thought the new lockdown measures were necessary or not (“Was it like this in East Germany mother?” – 28 September).

Back then, it was a 59.3%/40.7% split in favour of “unnecessary”. Perhaps if you’re a believer in bitcoin, you’re more likely to be sceptical of lockdowns – considering bitcoin’s libertarian origins, this would make sense.

Further to our note last week on the billion dollar bitcoin transfer that occurred on the night of the US election, another one popped through on Friday night. Or close enough to a billion anyhow: $941 million worth of BTC changing hands in the space of an hour:

Bitcoin’s “Power Hour”. Green bars (bottom) represent the volume of bitcoin transfers flowing through the blockchain over the past week. Red and green candles indicate the bitcoin price, with the red bubble showing the BTC price in USD at the time of the mega-transaction.
Source: ByteTree

Here at Southbank Research, we’re preparing for another kind of “Power Hour”.

A newcomer has joined our ranks – with a trading track record in the City as long as your arm. This man has run a successful hedge fund, and advised traders at Goldman Sachs, HSBC, Credit Suisse, Commerzbank and more on how to get an edge over the market.

And he wants to show you the secret to his trading success. It all comes down to one specific hour of the day – what he calls the “power hour” – where the market “shows its hand”, and indicates where it might be headed next. And he’ll tell you what his next big trade is – you’ll walk away with the name of the asset, it’s ticker, and his rationale behind the trade. Interested? Sign up here.

Thank you for all who wrote in on the subject of Bitcoin’s value or lack of it. I always enjoy reading your feedback and thoughts on these letters – I can’t print them all as I don’t have the space but rest assured that I do read every one.

Does Bitcoin pay interest? You keep banging on that cash deposits don’t, so where’s the difference? Interest rates aren’t it.

Funnily enough, while bitcoin does not yield anything by itself, earlier this year we saw a grand boom in a practice known as “yield farming”, where owners of owners of digital assets can lend them out to earn interest.

It’s a bit like depositing cash into a bank, to earn interest from them lending it into the real economy… but instead of cash it’s crypto, and there is no bank – the crypto is instead being lent directly to those who want it in the market via a layer of smart-contracts.

This is at the frontier of what is called “De-Fi”, or “decentralised finance”. It’s very tricky stuff, and very risky – but just as the internet figured out how to exchange value with the creation of bitcoin, it is now figuring out how to lend value. This is a pivotal development, though not for the faint of heart – right now, there’s yields on offer from “liquidity pools” with annual interest rates in the triple digits… and a level of risk commensurate with that.

Sam Volkering was right when he wrote in Exponential Investor earlier this year that yield farming is “not quite shooting fish in a barrel stuff. It does however have a lot of the hallmarks of the early days of the 2017 crypto bull market.”

The yield farming innovation reminds me a lot of the legendary “Wildcat Banks” in the Wild West during the 19th century which borrowed, lent, and issued their own currencies as much as they wanted without any regulation, leading to tales of both grand fortune and great loss.

Wildcat banks were ultimately made extinct with the intervention of the US government and the creation of the Federal Reserve in 1913. Which leads us on to these next letters…

My concern is not whether bitcoin has any value it’s whether governments will eventually strangle it if it interferes too much with their control of the economy. Look at the unmentionable things western governments are currently getting away with & then tell me – with confidence – that they’ll never ever make exchanging bitcoin for goods or fiat currency illegal. If you can’t get out of bitcoin then, surely, it has no value.

If the politicians kept their noses out of BTC, then I think it has value. However, I see no reason why they couldn’t implement their own version of BTC or digital currency (EU already have a paper and I suspect BoE is not far behind) and cancel the BTC exchanges, so you couldn’t get your money out. It’s the political interference that worries me as they interfere in markets all over the place so why not BTC.

Government intervention is the “grey rhino” of bitcoin – the easily spotted risk facing the asset. The problem is that if governments were to begin shutting down exchanges purely to reduce bitcoin ownership, it would legitimise bitcoin, and overtly paint it as a state-threatening power. Politicos would no longer be able to laugh the asset off as “tulips”, and would need to justify taking an authoritarian approach to the internet. (There’s a similar problem when it comes to taxing crypto – if investment in the space is really just gambling, how does it merit Capital Gains Tax?)

All that said, we may still see crypto exchanges shutdown in the future. But while the crypto exchanges can be shut down, if you’ve got an internet connection you can still send and receive bitcoin with a little tech-savvy.

The next step would be to try and ban the bitcoin protocol from Internet Service Providers. But just as you can access banned websites like Facebook and Google in China via a VPN, there would still be ways to access the bitcoin network. For governments to really try to stamp out bitcoin, they’d need to go “nuclear” – but that’s a subject for another letter…