If I were to tell you that gold miners or oil producers were about to cut their production in half, would that make you more or less bullish on gold and oil? More bullish of course. That’s exactly what’s about to happen to bitcoin, the digital currency.

Currently, 25 bitcoins are created every ten minutes. On 11 July, this number will drop to 12.5. Then, four years after that, it will half again. Why is this happening? There are roughly 15.5 million bitcoins in existence and the halving process means that the total can never exceed 21 million, expected to occur roughly a century from now. That’s all locked down in the code.

Limited supply is a powerful force, and making bitcoins scarce was a key feature of its design – and a key difference between bitcoin and normal, “fiat” currency, which can be printed in unlimited amounts.

Many people buy bitcoin purely for speculation – betting on the price going up. But they’ll only be proved right if others buy it for its utility. You can almost think of bitcoin as a social media stock. The more people who use it, the more valuable it becomes. But what, for the uninitiated, exactly is bitcoin? Quite simply, it is a digital asset that can be freely transferred across the internet. It doesn’t exist in physical form, there’s just a reference to your holding stored on a public ledger known as the blockchain.

This differs from a traditional database in crucial ways. With a traditional database, you dive inside, open a drawer, change the data, and then close it again. Both the buyer and seller must do this in addition to the exchange, clearers and other intermediaries. With all those different parties involved, there’s plenty of room for error in the settlement system.

With a blockchain, on the other hand, the transaction is recorded onto a new data layer known as a block. That block will never change and a new block is created every ten minutes. The data is stored in a chain of blocks, which is why it’s known as a blockchain – a common mistake is to assume that a bitcoin has a serial number. It doesn’t. Instead, it has provenance.

When you transact, the system checks that your bitcoins haven’t already been spent. It does this by examining the blockchain, which is where a bitcoin’s transaction history is stored. There are more than 5,000 identical copies of the blockchain and anyone can download it and examine the data. It’s truly open source. 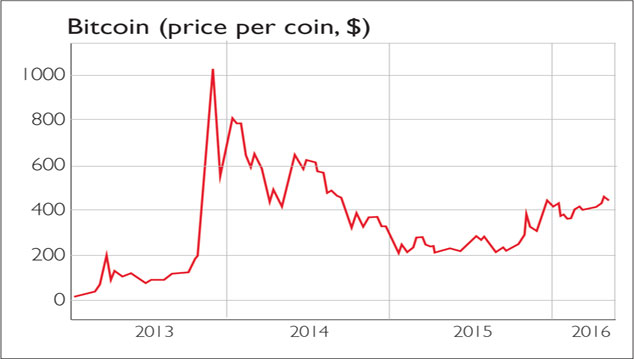 Although bitcoin is still somewhat experimental, the digital currency has survived without a glitch since 2009. And each new day that it survives, it quashes a few more doubters. It’s growing in popularity – already there are more than 200,000 transactions a day. That’s small compared to Visa, but the bulls are betting it will go mainstream.

As the chart above shows, bitcoin has already had one boom and bust – the price rose from less than $1 to $1,000 in late 2013, then crashed to around $200 by summer 2015. But the bear has now turned and the price is challenging $500. There’s less hype this time, and the capital investment behind the scenes is huge. The network is growing and supply is falling.

So as far as I’m concerned, you should treat this as a cheap growth stock. At $450, the “network value” of bitcoin is around $7bn. If it goes mainstream, it’ll give the FANGs (Facebook, Amazon, Netflix and Google) a run for their money.

On a final note, I’ve written a special report on bitcoin, blockchain (the technology behind it) and its place in the financial system. Click here to read it.

• Charlie Morris is the investment director of The Fleet Street Letter newsletter.

The emperors will bow, but their stocks will first

Badly disguised signs of a bubble

Kodak has joined the growing list of companies with spiking stock prices and is perhaps the most surprising of all. What these companies share is a good story, not a great business. In this episode, Boaz Shoshan, Kit Winder and…

Dear reader, I- Hmmm. So, uh… you remember that company that used to make cameras when you were a kid? Kodak? Apparently it uh… makes drugs now. Got three-quarters of a billion dollars as a loan from the US government…

Happy hump day, dear reader. I commented in yesterday’s note how the silver market had gone wild in the middle of the night – turns out some of you were involved! As one reader writes in: So, Boaz, were you…