ABERDEEN, SCOTLAND – It’s somewhat fitting that as we approach “The Ides of March”, a deadline in the Roman calendar for the repayment of debts, that debt is beginning to matter for markets.

A little while ago in Rumblings of a rout (17 February) I pointed to the rise in interest rates on US government debt as a potential risk to the stockmarket (and bitcoin) rally of the last year. When government debt falls in price, the interest payments on it (which were fixed at the time of its borrowing) become more attractive to investors. While the cost of the asset itself (the “bond”) is going down, the yield it offers to investors who buy it at that lower price is going up.

That yield on government debt is thought of as a “risk-free interest rate”. When that starts rising, risky investments can fall in price as they are no longer so valuable when a “safe bet” like lending to the government pays decent interest.

While the US is an ocean away for us here in blighty, US government bond yields are very important nonetheless to British investors. The world defines value in greenbacks, and the interest rate that can be earned on said greenbacks can change the price of everything. For interest rates are the price of money: the cost of borrowing it, and the reward for saving it. The price of the world’s money – the US dollar – has inordinate significance relative to other currencies.

Indeed, you could argue that as the world on a US dollar standard that all market prices and interest rates – to a greater or lesser degree – are influenced by the funding costs of the American government.

This is a reality with political implications that many would rather not mention or even face – least of all politicians. The idea that the star-spangled government in Washington DC is so critically important that global financial market conditions are affected by its ever more inward-facing economic policies… that might please an American patriot. Patriots from other countries might see it differently however – the world economy an American game, painted in stars and stripes and requiring all players to stand for the anthem whether they like it or not.

But it is what it is: an American global economy, which we just live in. Not to mention invest in, which brings us back to that rise in interest rates leading to a sell-off in risky assets like stocks and bitcoin.

I posted this chart back in Rumblings of a rout – here it is again, but updated. The rise in US government funding costs is shown here in blue (the US ten year bond yield). In green is the MOVE index, which shows how volatile the market expects the US government debt market will become.

Over the past couple of weeks, both the funding cost and the volatility of that market have kept climbing: 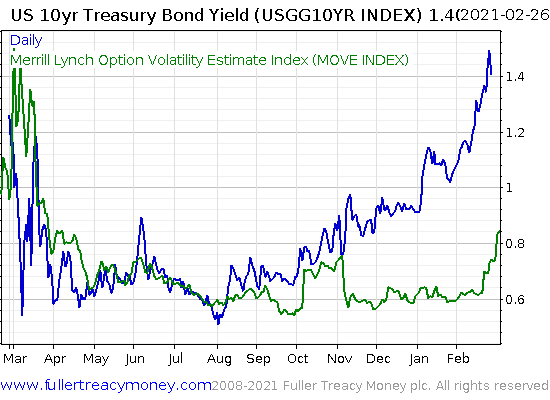 A 1.4% interest rate on a ten year loan is still ridiculously low for the US government on a historical basis, so you’re right to wonder why this is a big deal. The answer lies in the gargantuan level of total debt the US government now finds itself burdened with, where even small increases in interest expenditure have a major impact.

As macro investor Louis Vincent Gave recently commented, a 0.3% increase in the cost of maintaining America’s total debt pile is equivalent to the amount the US spends annually on its prized Marine Corps. A 0.5% increase in debt funding costs meanwhile, would be equivalent to the amount the US spends on its enormous Navy.  These seemingly marginal increases in the costs of debt matter more and more, and with WuFlu destroying the tax take over the last year, more debt is being layered on at an aggressive rate.

But it’s not just the American government which comes under pressure when debt becomes more expensive of course. As higher interest rates are passed through the financial system to corporate bonds and corporate credit, all the companies which rely on the constant visits to the debt trough to stay afloat find themselves in trouble too.

The degree to which higher interest rates would damage the corporate sector was put in stark terms by hedge-fund manager Chris Cole of Artemis Capital the other day, who commented that “A normalization of [interest] rates to pre-2008 levels would cause US Corporate Profits to collapse by 50% due to increased interest payments alone. A move in rates back to 1970s peaks would result in the total elimination of all US corporate profits.”

To illustrate how this volatility in the debt market rocks stocks, look again at the MOVE index (bond volatility, green), but this time charted against the hugely successful Nasdaq stockmarket index (blue). As you can see, the recent sell-off in the Nasdaq was directly preceded by the rise in bond volatility: 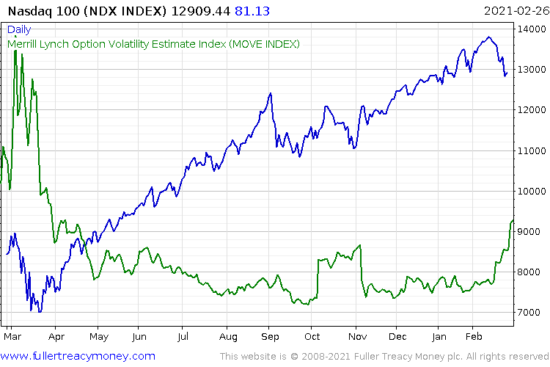 I expect this recent turmoil in risky assets won’t cease until the bond market calms down. With the pressure exerted by higher rates on the government and corporate sector, I don’t think it’ll be long before the Federal Reserve steps in with the printing press to buy the bonds (or makes promises that it might) to make sure that occurs.

The question is, how fast will the Federal Reserve move to do this? This is what I’m wondering about – for if they delay, the ass could fall out the likes of the Nasdaq and bitcoin before they arrive to save the day. So much of the grand rallies we’ve seen have been on the back of strong forward momentum for risky assets – if that momentum runs out, then I think prices will turn south very quickly.

But if they do start printing money in a hurry, then I think the move to the upside could be similarly extreme – especially for the likes of BTC, which behaves like a tech stock on steroids and has become scarcely available on crypto exchanges in recent months.

Isn’t it ironic that an asset like bitcoin “needs” government intervention to keep its price up? Though considering why the asset was created in the first place, perhaps that’s not so ironic after all…

PS Thank you for all your responses to last week’s letter when I asked what the collective noun for gold sovereigns is (or might be) – I’ve compiled quite the list! We’ll explore that – and more – tomorrow…