“This market is quiet… too quiet”

“This market is quiet… too quiet”

SODERMALM, STOCKHOLM – Let’s start the week off with an alarming chart to get the juices flowing, shall we?

This one certainly makes me nervous:

That’s global Google search popularity for a certain word (indexed, so most searches ever = 100).

Any ideas what it might be? Peaked in Christmas 2017, and has been in the doldrums ever since?

It’s that lack of interest in recent years that puts me on edge. You see, the search term in question is the name of a certain asset that soared to great heights in 2017, with much of the demand coming from the everyman.

If Google searches are a decent measure of public interest – and I believe they are – then the chart above suggests that demand from the average man on the street is still very low.

But while the public eye is elsewhere… somebody has been buying this stuff hand over fist: 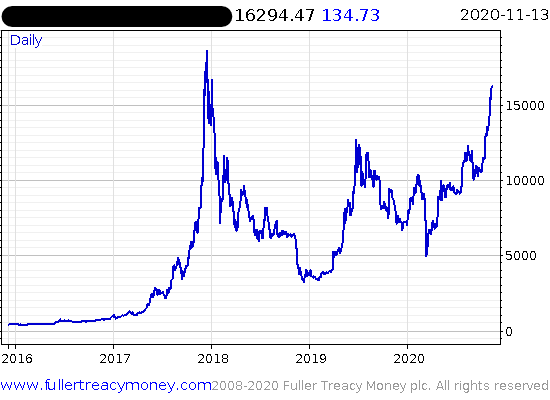 You’ve probably guessed what asset I’m talking about – after all, I mention it relatively often here at Capital & Conflict. It’s that old friend of ours, bitcoin.

That chart of Google searches gives me the willies. Bitcoin has been on a massive tear this year – especially through October – but it’s not coming from Joe Public. Makes you wonder who it is then that’s buying… and just how wild the bitcoin price might become when Joe Public decides to get in on the action again.

It’s the prospect of another 2017 rally with prices already at these levels that I find alarming – especially as bitcoin mining supply was halved earlier this year. Even though I’m a bitcoin “hodler” (to use the appropriate parlance) and such a surge would be positive for me, the idea that the recent market action is what happens before the public get involved unnerves me. The speed with which bitcoin can move, creating and destroying vast swathes of wealth in hours… it’s an intimidating force, and playing with it requires an iron constitution.

I meant to share this chart with you last week, but didn’t get around to it. On the night of the US election, a billion dollars’ worth of bitcoin was transferred over the network in an hour. Such a heavy load of transactions in a short period suggests the bulk of it was going to one individual or entity.

Bitcoin transactions (valued in USD) in blue bars at the bottom, with the price for
that week in green and red candles above
Source: ByteTree

It could just be a coincidence. The buyer could be one of the investment funds that have recently begun allocating to bitcoin either by loading up or rebalancing their portfolio after being given a load of new money to manage.

Or it could be a crypto exchange not wanting to be caught short following the recent surge in demand, and loading up on a big stack of BTC to make sure there aren’t any interruptions to the service.

But the timing is a bit funny. You do wonder if the election might have had something to do with it…

To my eyes this recent rally further annuls the argument that the 2017 rally was just one massive bubble and that bitcoin is destined to fade into irrelevance. I’ve shown you this chart in these letters before, but it’s worth examining again to drive the point home.

When compared to all the other famous asset bubbles, none of them recovered after the peak – let alone started surging again: 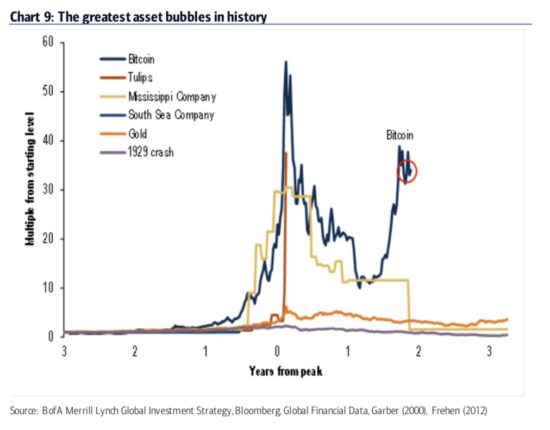 Note that this chart is out of date – BTC is now almost at year three
and further to the top right
Source: The Market Ear

Is this the right time to be getting into bitcoin then – are the conditions right, with the prospect of a re-opening now on the table? When in doubt… check the treasure map.

PS Last week we saw the biggest crash in market momentum ever recorded in modern history. If ever there was a sign that the market winds are changing, that’d be a sure contender. When market “regime change” takes place, it’s important to make sure your portfolio benefits from the change in conditions – and this chap will show you how.