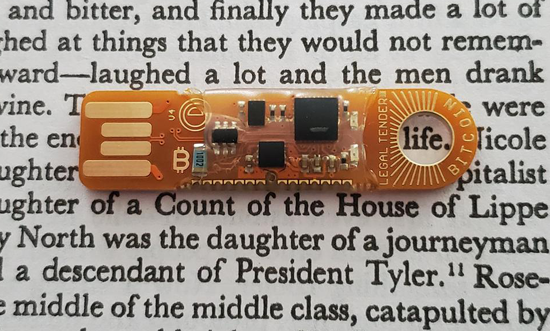 WINDERMERE, LAKE DISTRICT – I gave this away as a gift recently. It’s a remarkable little piece of kit. No ordinary USB stick, this orange flash drive is a miniature treasure chest – with virtually no limit on capacity. You can stuff as much wealth into this as you like. A thousand pounds, a million, a billion… hell, you could store a hundred billion pounds on this little beauty if you had the means and the inclination to.

Snap off that blue chip you can see on the bottom left of the circuit board, and this little treasure chest shall avail you of all its riches. But lose this USB stick – and you stand to lose it all…

We’ll come back to this ingenious little device in a second. Have you ever seen an image like this before, in the newspaper or on a website somewhere? They’ve been around for a long while now, but I see ‘em more and more these days: 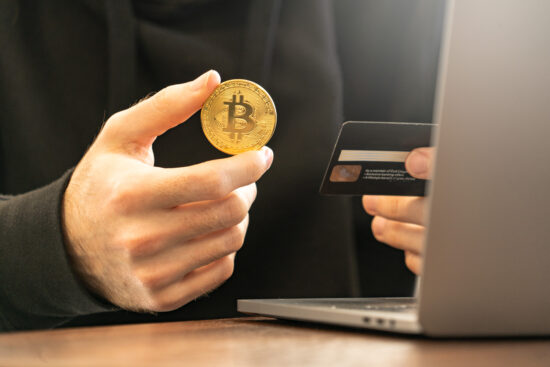 The representation of a “bitcoin” as a physical metal coin makes for a striking image and has thus been used in countless newspaper articles and adverts. We ourselves at Southbank Investment Research are guilty of this too – for such images grab the attention, and there are few alternatives (though I’ll come back to that in a second).

But despite the popularity of this image, many bitcoiners revile it.

The main reason being that, well… it’s an ounce of copper bullion, which bears no representation whatsoever to actual BTC other than the logo displayed on it. You could own thousands of these things and still own no bitcoin.

If you zoom in, you can actually see “1 TROY OZ 999 FINE COPPER” and the name of the mint “MJB MONETARY METALS” stamped on to it. MJB – the UK-based mint which created these rounds – is now defunct. Little did the eponymous founder, one Mike Bruce, realise how viral his creations would become, and how his name would (indirectly) be plastered across newspapers and websites all over the world. If only Bruce could claim royalties on all the images used of his product – he’d be halfway as rich as Satoshi by now…

To be clear, metal rounds have been minted which do “contain” bitcoin. The “Casascius” rounds of the early 2010s contain the private keys to BTC inside them within a plastic hologram strip. Of particular note are 7 gold rounds in the Casascius series that contain ₿1,000 minted in 2011. Two of the seven have since been “emptied” of their BTC – but there are five gold coins still out there containing 40 million quid’s worth of bitcoin. I wonder where they are today. That’s a coin you sure as hell don’t want to lose…

It’s wild to think that so much wealth could not only be held within such a small item, but sold at a moment’s notice. While rare gemstones can be small and enormously valuable, selling them quickly is tricky if you’re not well connected, and even trickier if you don’t want your asking price to take a substantial hit first. To use a financial term, the market for such things is not “liquid” – buying and selling in size and at speed creates a lot of friction.

However, provided you’ve got an account at a large crypto exchange (and they’re satisfied you’re not a money-launderer), selling large quantities of BTC at speed is not hard. And the more the market matures and develops, the more liquid it shall become.

And so we return to that USB stick up top. That’s an “Opendime” manufactured in Canada by a company called Coinkite. You can load it up with as many BTC as you like – from a fraction of a penny, to billions of pounds – and it shall look no different.

The setup is quite clever, and it can be done without the use of the internet. All you do is plug the device into your computer, and then dump a load of random files into it. It uses the scramble of information received to create a bitcoin wallet at random, which you can then load bitcoin on to.

What’s unique about the device is that it’s not intended to be used like a normal bitcoin wallet. It’s not meant to be used to send money across the bitcoin network across the globe, but to be transacted with as a physical asset – literally handed over to the next owner as a means of exchange. This is known in finance as a “bearer-instrument”: he who has possession of it (he who “bears” it), also owns it. This would traditionally be a bond or share certificate, or more commonly today, physical cash. You might think of the Opendime as a “bitcoin banknote”.

To encourage usage of the device in this way, once you’ve set up the bitcoin wallet on the Opendime, you are deliberately not told what the private key is (the password to the funds contained inside it). Nor does your computer, or Coinkite. If you wish to discover what the private key is so you can spend the BTC using the bitcoin network rather than just giving the USB stick to somebody, you actually need to vandalise the device. There’s a blue chip on the circuit board which you must remove with a pin – there’s a hole at the back to make this straightforward. Once you’ve physically compromised the USB stick in this way, a file will appear the next time you plug it into a computer containing the private key.

The Opendime is the closest thing that exists to a physical representation of bitcoin. It’s these USB sticks you should be seeing in newspapers and adverts referencing bitcoin – not copper bullion. Once that changes, you’ll know that the world’s perception of bitcoin is finally catching up with this rapidly maturing asset.

PS The pullback over the weekend has the bitcoin bears jubilant – but is the crypto rally really over? Here’s what our resident crypto expert thinks.

PPS If you are interested in acquiring an Opendime (they make great gifts), you should only get them direct from Coinkite to prevent third-party tampering – you can find them here.

Note that neither myself nor Southbank Investment Research have any commercial arrangements with the company and would receive no payment for any purchases made.