The Ides of May

The Ides of May

NEW TOWN, EDINBURGH – “My candle burns at both ends; It will not last the night; But ah, my foes, and oh, my friends— It gives a lovely light!”  Edna St Vincent Millay

Apparently that was Roald Dahl’s motto. I dunno about the “not lasting the night” part, but the monthly candle on the bitcoin price is certainly burning at both ends – and casting a lot of light: 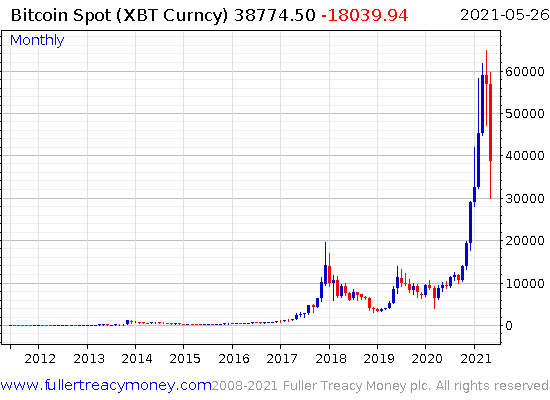 For those unfamiliar, the “candles” displayed in charts like this show the range in price of an asset over a set period of time (in this case, a month) as a bar with two wicks on each end. The wicks indicate the absolute range in prices over the month, while the thicker bar indicates the starting and closing price over the month. Blue candles indicate a month where the price has risen – red, the opposite.

I wonder how this month shall be remembered by observers of the bitcoin space – “the big wipe”? “Big Red One”? The “Ides of May”? Or the last great buying opportunity for BTC..?

It all depends on what happens next…

Some believe this current crypto cycle is more akin to the 2013 bitcoin boom, than the more recent (and larger) 2017 cycle. If that’s correct this could just be the sell-off in the middle before the grand upswing at the end. 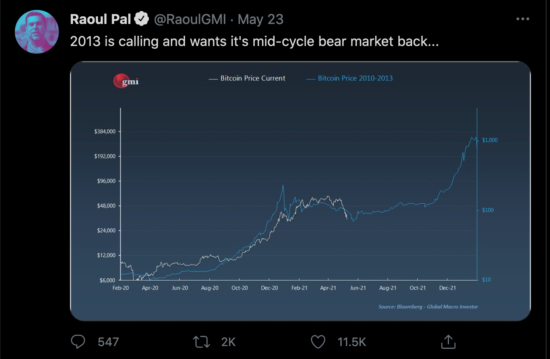 Last March in Satoshi’s last move I argued that bitcoin was at a “make or break” impasse, where it would either collapse or make a parabolic move higher. In classic fashion, bitcoin confounded me and did the opposite, effectively falling into a holding pattern. While it would make two new all-time highs after I wrote that letter, BTC was effectively rangebound for months until a fortnight ago when it finally broke down.

With BTC falling to the $38-40k level, I’m inclined to repeat myself. The recent fall has upped the stakes – the recent newcomers to the market have been shaken (much of the recent selling in BTC has been “bitcoins” that were only 1-6 months old), and all the world has been reminded of how volatile bitcoin is. And yet, bitcoin has never been bigger. One estimate from Goldman Sachs (so take it with a pinch of salt) puts total bitcoin users at 140 million. And the ultimate “HODLers” have been buying – bitcoin addresses which have only accumulated BTC and never sent any received over 45,000 BTC in the past week.

One would hope that the 775,000+ crypto traders who got liquidated on the worst day of the sell-off (the 18th), losing some $8.6 billion in 24 hours, will have learned a valuable lesson: stop using leverage, goddamit.

But one would hope in vain. For there’s clearly just something about crypto that draws leveraged players in like moths to a flame, no matter how many times they are burned…