The Ides of March

The Ides of March

ABERDEEN, SCOTLAND – “If you thought 2020 was bad, wait until it turns 21 and starts drinking” – some American

Christmas ain’t far… Hogmanay ain’t far… as we reach the end of the week, it’s becoming suddenly very apparent that 2020 is nearly over.

Hopefully that doesn’t mean we’re due for some kind of “crisis climax” and we’ve another big shock coming up, but you never know – “it is 2020” etc, etc.

I don’t recall any other year of my (admittedly short) adult life which has gone by this fast. It really doesn’t seem very long since I was writing to you around Christmas time back in 2019, and wondering what this year had to offer.

You could write several volumes just describing some of the incredible activity we’ve seen take place this year. I’ve done my best to show you a few in this letter, but they keep on coming… like Tesla on track to become larger than the entire American energy sector. With a mighty market cap of $626bn, $TSLA is close to becoming larger than the entire S&P 500 Energy Index.

Key to the bullishness we see in stocks today is the backdrop of a weakening dollar. After soaring suddenly in the March, the Federal Reserve and the Treasury have been successful in managing to devalue the world’s reserve currency – making all the dollar debt in the world much easier to bear. 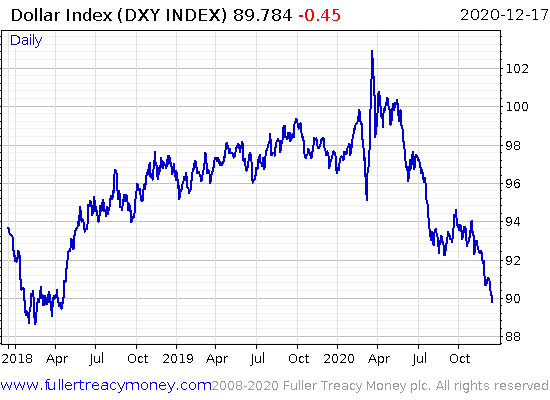 That’s one of the lessons this year has drilled into me – when the global financial system seizes up, the dollar crushes all naysayers and reminds everyone that it is still the global reserve currency. When there’s a liquidity squeeze, cash is king, and while the everyman may want gold and silver to protect themselves, the big players who move markets do not. Precious metals become just another item on a long list of assets that need to get sold in order to meet margin calls and reduce leverage.

But once the money printers got a-rollin’ at the central banks, precious metals were off to the races.

We saw a similar dynamic play out with bitcoin. Born of a financial crisis, it was finally tested by one – and in the chaos of March, it got wrecked like everything else. It’s in the aftermath of the crisis that it has soared – not in the heat of it.

While I am a heavy investor in both gold and bitcoin, and both are hedges against government mismanagement of money (to be polite), the crash in March shows that both assets are not immune to the immediate pressures of fiat currencies.

They are a long-term hedge, and they will help you restore your financial sovereignty – but they’re not antifragile. This isn’t a problem if you take a long view of course, and can handle big price swings in your portfolio without it affecting your mood. That’s easier said than done, but it can be done if you have conviction in a broader, long-term investment thesis that governments will be successful in trashing their currencies, as they always have been throughout history.

Those who sold BTC and gold in March are paying for it now. And those who bought are on top of the world. If you want to take advantage of the next move in the latter, you should take a look at this.

While our office will be shut on Christmas and New Year’s Day and many of us at Southbank Investment Research will be taking time off to spend with friends and family over the next few weeks, we’ve been preparing some special content for you over the festive period. You’ll be hearing from the founder of our company, Dan Denning, on what he’s been up to this wild year, and from the outspoken Bill Bonner from his ranch in Argentina.

We’re also in the process of launching a new podcast. It’s a bit like a book club, but I can’t reveal too much right now. The first one, which will be going live with in the near future, features a very special guest – who a year ago, as you may recall, released a particularly memorable piece of music…