It’s not often that Charlie Morris pushes the boat out with a big claim. Indeed, it’s his ability to deftly hedge risks rather than go out on a limb that’s helped him become such a successful fund manager.

He normally holds his cards close to the chest, only revealing his hand to loyal readers over at The Fleet Street Letter Wealth Builder.

But sometimes, his conviction in an investment idea becomes so strong, he wants to yell it from the rooftops. And when he does that, you need to listen.

Gold was one of the few assets that boomed through the misery and inflation of the 1970s. And it’s bitcoin – often labelled “digital gold” for its scarcity – that Charlie thinks will become the indispensable asset for investors this decade.

In fact, he feels so strongly about the rise of bitcoin over the coming years that he’s actually setting up a crypto hedge fund to trade the big moves, using the tools he’s built over the past few years to get an edge over the rest of the market.

Charlie’s passion for bitcoin seems to become more fervent whenever I speak to him. And it’s pretty contagious. When an accomplished fund manager has such conviction in a single trade that he’s staking his career on it, it makes you reconsider your own beliefs on the asset in question.

When you considering how dominant the internet has become in our everyday lives, there’s a compelling case to be made that “internet money” will have a bright decade.

The growth of the internet seems irrepressible; relentless. No matter what is thrown at us in the real world, cyberspace only seems to grow in size. It’s like some invisible imperium constantly expanding its borders, endlessly laying claim to land that we didn’t know existed.

No matter how miserable the years ahead of us may be – due to inflation, deflation, more pandemics, more pandemonium, deeper government intervention, Cold War skirmishes or Lord knows what else – it is hard for me to imagine that by 2030 the internet will be smaller or less relevant to the world.

I think that by 2030 – bar a catastrophe like nuclear war – the internet will be much larger, and much more developed to the point that our online experience today will be thought of as quaint.

But as large as the internet may become… there can only ever be 21 million bitcoin. And that’s why owning a stake in it – a limited resource in an unlimited domain – makes for such a compelling proposition.

Zooming in a little closer, BTC is certainly looking more popular this year than it was in 2019. While it got whacked hard in March, it didn’t fall anywhere close to last year’s lows and it has since broken higher than last year’s highs: 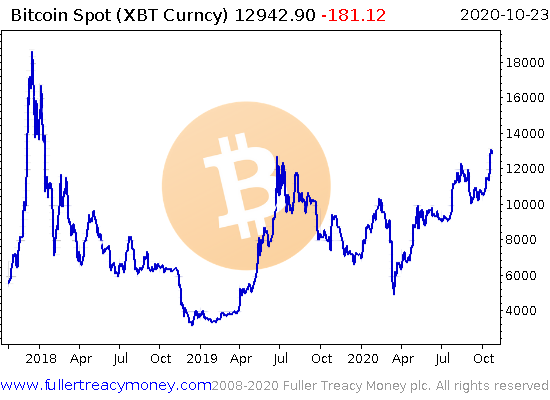 Bitcoin has attracted significant attention recently after payment processor PayPal announced that it will allow its users to own and send BTC to each other. This will of course raise bitcoin’s profile and play a role in making the asset appear much more legitimate.

The announcement has added more fuel to the fire already raging in the market for PayPal stock, which has had an extraordinary six months: 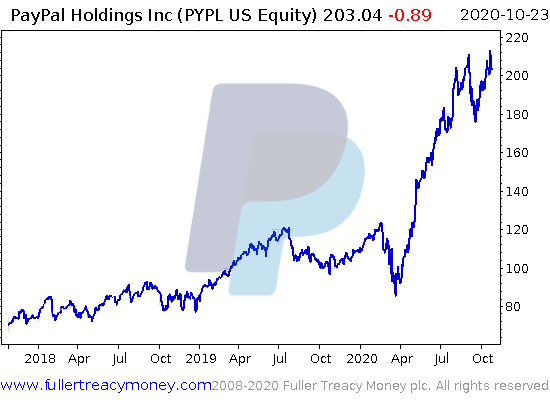 One of bitcoin’s great properties is that it does not require a financial intermediary like PayPal to function, which makes this “positive” announcement rather ironic.

To some bitcoiners, financial adoption of this kind is the Holy Grail, evidence that bitcoin is gaining recognition and respect by mainstream institutions – which must mean good things for the BTC price. But I wonder if this development is really such a great step forward for the asset.

My understanding of how the PayPal’s system will work is as follows. If you own bitcoin through your PayPal account, you won’t be able to withdraw it: only sell it for fiat or send it to another PayPal user. Similarly, if you already own bitcoin outside of PayPal, you won’t be able to send it to your PayPal account; everything must take place within the PayPal ecosystem.

When users want BTC, PayPal will procure it on their behalf from a crypto exchange called Paxos and then store it for them.

When PayPal users send bitcoin to each other, the transaction won’t be made through the bitcoin blockchain – instead, PayPal will just transfer ownership of the BTC to a different user within their own database.

Of course, if for any reason PayPal doesn’t want you to be making a transaction, it will freeze your account. And anonymity? Don’t make me laugh…

Owning bitcoin through PayPal will be a bit like owning US dollars as a private citizen between 1944 and 1971: your dollars were supposedly backed by gold bullion, but you couldn’t ever get at it – you couldn’t see it, touch it, and you certainly couldn’t withdraw it.

You just had to take the “full faith and credit of the US government” at face value, and trust that the gold was there… until Richard Nixon interrupted the latest episode of Bonanza one Sunday evening in 1971 to announce that actually, it wasn’t.

Just as dollars before 1971 were derivatives of real gold, PayPal bitcoin will be a derivative of real bitcoin. And I can’t say I’m all that excited by “The Full Faith and Credit of PayPal”.

What made Nixon’s betrayal in 1971 all the graver was that it was illegal for Americans to own gold bullion at the time.

Americans had been banned from owning gold bullion in 1933, and corralled into holding dollar bills instead, which were gold derivatives. Americans wanting to protect their wealth with gold bullion after Nixon’s announcement (as many investors ended up doing that decade), would need to break the law or wait until 1974, when Gerald Ford made it legal again.

Just as Americans were pushed from owning real gold to owning paper derivatives of gold (US dollars) which were then defaulted upon, I wonder if something similar could play out with bitcoin. Imagine if bitcoin ownership was made illegal unless you owned it through PayPal or a similar financial institution – a regulatory action which would be met with much less uproar than an outright ban on all BTC.

Bitcoiners would be similarly corralled into a digital derivative of bitcoin rather than the real thing… and the rug could be pulled on them in just the same way. One day, PayPal could announce that the bitcoin they hold for their customers had gone missing… was subject to a new government tax… or would be diluted, by increasing the supply of “PayPal BTC” in PayPal’s network without expanding the supply of actual BTC they hold in their vaults.

For now, I think bitcoin is too small a threat to be the subject of such a broad and nefarious government scheme.

But if Charlie is right about the 2020’s being bitcoin’s decade, then its status is set to soar. And the higher its price goes, the larger bitcoin’s market cap becomes… the more “something will need to be done” about it. And it’s maybe then we’ll discover that the Holy Grail of mainstream financial adoption for BTC was really a poisoned chalice after all…

PS While I say bitcoin doesn’t merit such a nefarious scheme just yet, that doesn’t mean the government hasn’t intervened to manipulate its price. As we wrote earlier this year, a former US government official happily bragged on the record how the US Treasury and other financial institutions were keen to introduce bitcoin futures to the market in order to whack the BTC price down – a strategy they had already tried and tested on gold with great success…