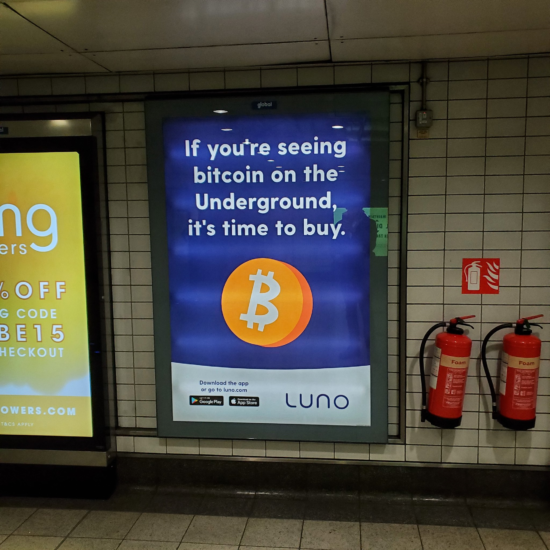 Is it really time to buy bitcoin when there are adverts telling you to buy it on the London Underground?

Conventional investing wisdom would suggest the opposite. Ads for speculative investment opportunities arrive late in bull markets, not early.

One thing’s for sure: if the price of bitcoin falls significantly from here, this advert will be referred to by bitcoin bears as an “obvious” sign that the top was in, and the price could only go lower.

But is this advert a sure sign that the whole thing is a bubble, primed to collapse?

As I explained in The Supermodel Trade (12 February), I can’t trust the “classic” signs of a market top any more. The internet and lockdowns have made them unreliable; inflated their value away. All this ad does is make me feel uneasy.

But hey – I’ve seen adverts on the Tube for passive investment funds for years now, and that trend sure as hell hasn’t collapsed yet…

A month ago in Satoshi’s Last Move (3 March) I said that bitcoin was about to explode into a parabolic bull market or a brutal bear market, with no in-between.

While the price action since has been positive since – BTC is up around $8k – my prediction (indicated below) has been somewhat lacklustre. 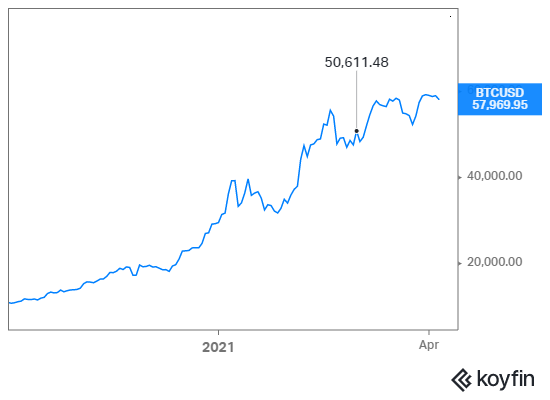 But a major event for the crypto space is coming up which will almost certainly make the space more exciting. In a week’s time, the gigantic crypto exchange Coinbase is going public: the demand for its shares will be a key gauge of investor interest in the crypto space.

But interestingly, the results Coinbase has published in the run-up to this event speak volumes of just how interest there now is in the crypto space.

… Coinbase Global Inc. said it expects to report that first-quarter profit of $730 million to $800 million, more than double what it earned in all of 2020.

Coinbase, the largest U.S. cryptocurrency exchange, likely generated revenue of $1.8 billion in the first three months of the year, surpassing 2020’s annual total of $1.3 billion, the company said in a statement with its preliminary results. It had 56 million verified users in the quarter, with an average of just over 6 million users who transact monthly.

The exchange, which also operates a digital-currency custody business, plans to make its debut through a direct listing with Nasdaq on April 14, the first of its kind for a major cryptocurrency company. Other crypto startups considering going public and institutions that have mulled entering the industry will be watching the debut closely to gauge investor demand.

Coinbase has also revealed that as of the end of March, it was holding on to $122 billion in assets for financial institutions. While I’ve written frequently in this letter how institutions have arrived in the digital asset space, this is a much higher figure than I’d have expected. Who are all these guys? I suspect some of these institutions haven’t revealed their crypto ownership publicly…

If you have any ideas who they might be, let me know.

This brings up another conundrum for the bitcoin investor – a case of glass half full, or half empty. This large institutional ownership of crypto shows that mainstream adoption is here, which is good. However, it is also already here: that money has already entered the market. So how much higher can the BTC price go? For it’s not like the everyman has yet to enter this market – there are ads for the damn asset on the Tube…