SOUTHWARK, LONDON – There’s a chart I’d like to show you today. Just one. It’s the reason I don’t feel I can be bearish about bitcoin right now, despite all the hype…

But first, some context. Remember The Big Suck back in January? In that letter, I told you I was cautiously optimistic on bitcoin because its supply was being strangled. The amount of BTC available for purchase on exchanges was being drained as buyers withdrew their coins to private wallets, making this scarce asset all the scarcer…

For those not familiar with the quirks of the space, the practice of withdrawing bitcoin from exchanges and sitting on it is known as “HODLing”. And due to the nature of bitcoin, just how many people are doing this is publicly available information, which can be charted and assessed – as I said back in January:

As all bitcoin transactions are published on its blockchain, it is possible to analyse if those on the receiving end of said transactions are likely to spend that BTC, or sit on it. For example: bitcoin wallets (think “bank accounts”) used by crypto exchanges are very active in receiving and sending BTC, while wallets controlled by bitcoin “whales” (early investors with very large holdings of BTC) transact far less frequently.

It’s not just the whales that sit on their BTC however – the practice is celebrated by bitcoiners everywhere (myself included). The “HODL” refrain commonly heard in the bitcoin community (a drunk misspelling of “hold”) and the act of “stacking sats” (meaning to frequently buy small denominations of bitcoin, known as “satoshis”) both speak to the common investment strategy of buying BTC on an exchange, sending it to a private wallet, and then doing absolutely nothing with it. This removes that BTC from supply, which puts upward pressure on the price and in turn makes new buyers more reliant on miners for BTC purchases…

Back then, I posted a chart of just how much BTC was being drained from exchanges – a chart I’d like to show you again (updated) today. But before we get to that, one more quote from that letter:

HODLing bitcoin has become popular. It’s no longer a trait of the grassroots bitcoin community, but I suspect of the larger players who have recently arrived in the space. And that’s why I think – despite the elevated price of BTC – that when it breaks out of this range, it could move explosively higher yet again. There may simply not be enough BTC on the exchanges to satisfy demand without the price rising significantly.

I could be wrong of course. But given this, and taking into from the risks I highlighted above, I remain cautiously optimistic about bitcoin.

Bitcoin was around $32k when I wrote that. With the price now around $60k, perhaps I shouldn’t have been so cautious… 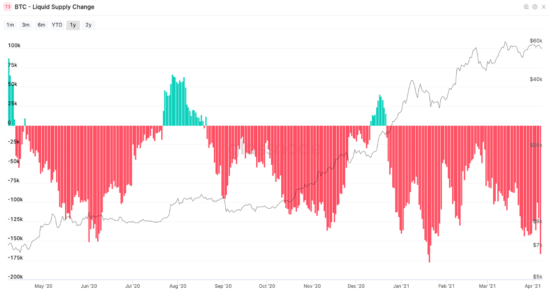 The figures on the left-hand scale show how many thousands of BTC are being added to or drained from crypto exchanges. The red bars indicate withdrawals, while the green bars show bitcoin increases. Right-hand scale and the black line shows the bitcoin price in USD.
Source: @woonomic on Twitter

It’s this dearth of BTC supply on exchanges that makes me think the bitcoin bull run still has wind in its sails. Just how much further it could go, I don’t know – but a colleague of mine here at Southbank Investment Research thinks the upside could be significant indeed…