Superpower(ed) debt only lasts so long…

Superpower(ed) debt only lasts so long…

SOUTHWARK, LONDON – I told you you’d need to act fast…

That entire batch of ₿lockhead amber ale sold out in 12 hours. My hopes that there might be some extra left for me to buy in a fortnight have been dashed… but it’s great to see I’m not the only one dying for a bottle.

I understand there was a lot of competition for the final cases of this batch. If you did manage to acquire some, I’d love to know what you make of it. All feedback (positive and negative) and suggestions welcome here.

Last week in Market, market, on the wall… I pointed to the divergence in stocks and bonds, and asked you which market made for a better “crystal ball” for predicting the future. Stock market volatility remains very low while bond volatility remains elevated, which suggests the bond market fears something stocks do not.

I received some interesting responses. Of the readers who favoured one side over the other, the “bond villains” came out on top:

… given the current ‘disconnected from reality’ state of the stock markets the bond guys have it right, I am expecting capital flight to safe havens.

When Akhil Patel, our expert in investment cycles, has a moment I certainly will! And we’ll come back to that topic in a moment. But first:

It’s not a simple choice methinks, the bond indicator is right but that doesn’t make ALL equities a sell; I suspect it is worthwhile, though, to rotate from stocks that have been doing well (the “sometime, never” profit types) to those where “profits today” will be considered more attractive. Welcome back inflation.

Looking to invest in “real world” companies rather than the tech darlings trying to conquer the world without making any money first? That’s certainly the kind of approach Charlie Morris has been taking recently over at The Fleet Street Letter Wealth Builder…

This response to that previous letter I found particularly interesting:

[That Merrill Lynch graph] looks a bit like a graph I’ve seen of the UK’s perpetual bonds of the Victorian era which appeared to peak and then fall with the Boer War, when the mask must have finally slipped.  US dominance has now slipped, it is grim.  Surprisingly, US interest rates have gone much lower than the Victorians’, even with soft money.

As a quick reminder, here’s that Merrill Lynch graph they’re referencing. This is the performance of US government bond futures – in the past few decades, it’s been a great trade as there’s been very high demand for American government debt. But very recently, the trade has begun to sour: 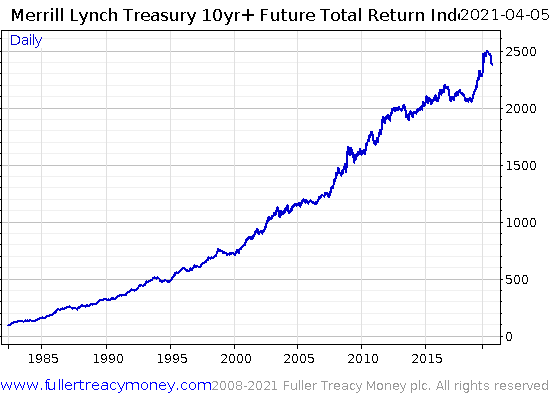 Now, it’s hard to get data on the UK’s perpetual bonds (consols) from the Victorian era, but the Bank of England and the Federal Reserve do keep a record of it.

This is a chart of British government bond yields (the interest rate the market charges the government for borrowing) throughout the 1800s: 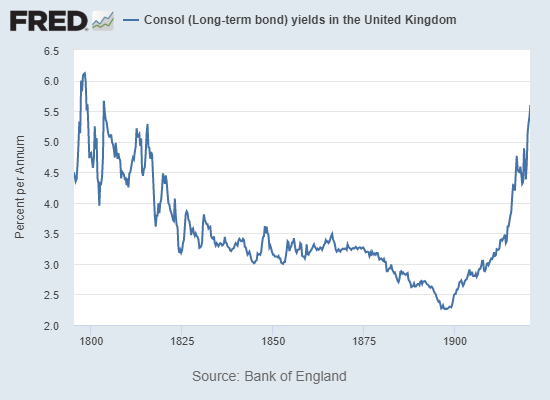 Note that this is a bit upside down compared to the other chart, as this is a chart of the yield of the bonds, rather than the overall price of the bonds. (I.e, when the line goes down, that means the value of the debt is going up.)

With that in mind, you can see how British government debt was in a bull market for most of the 1800s. It peaked just before the Boer War in 1899, when demand for British debt was so high that the British government only had to pay a little over 2% to borrow money with no final repayment date.

But from that point onwards, the market began to value British government less and less – a foreshadowing of the end of the British Empire. The finances of the Exchequer would never again be so secure – and nor would Britain’s status as the global hegemon. Britannia’s days of ruling the waves were numbered from that point onwards.

The US would assume the role of Western superpower after Britain’s finances were destroyed from two world wars and the Empire was wound up. But could this recent sell-off in US government debt be signalling the same thing for the superpower across the pond? Could this be the end for America’s rule of the waves?

It’s early days yet… but food for thought.