SOUTHWARK, LONDON – The doors to a speculator’s paradise have been thrown wide open.

And those that dare explore this land seeking riches, risk ruin in equal measure…

Yes, dear reader: it’s alt-season. That magical time when uber-speculative cryptocurrencies with grand far-reaching goals and little current application explode in value to the point where both the bears and the bulls are left questioning their grip on reality.

The volatility is immense. The bullish narratives spun around them appear ludicrous… until the price action starts to agree with them. And the crashes occur so fast that even an airbag installed on your desk might not save you.

For those that dare enter – and know how to keep their risk under control – it’s a punters paradise. And for everyone else watching, it’s the best fireworks show you can find in financial markets.

Alt-seasons have become a regular fixture of the crypto space. These are periods when digital assets other than bitcoin known as “alt-coins” (alternatives to bitcoin) come to the fore after bitcoin has been trending up for an extended period of time.

During such a “season”, you’ll see some alts deliver ridiculous returns often thousands of per cent high… but just as often you’ll see grand collapses as hype wanes, insiders cash out, or fraud is revealed.

Watching these highs and lows from the sidelines is a bit like watching Titanic on double-speed. For those participating in them, it probably feels like being aboard the vessel…

Some investors hate the excessive nature of the space, which I can understand. But provided you know what you’re doing, run a tight ship with your trades, and have the highest appetite for risk that is capable of being stirred in a man, I have no issue with anyone wishing to enter it. Hell, I’ve ventured in myself on many occasions. Just recognise the nature of this market, this wilderness, and come prepared. Were the altcoin market a real place (an unexplored frontier perhaps), you’d bring a gun.

I told you alt-season was on the cards in February, in Party at the frontier. Back then I pointed to the rise in Ethereum, the largest altcoin out there, as an indicator that things were about to get very frothy in the alt space. After a consolidation, we’re now back at new all-time highs: 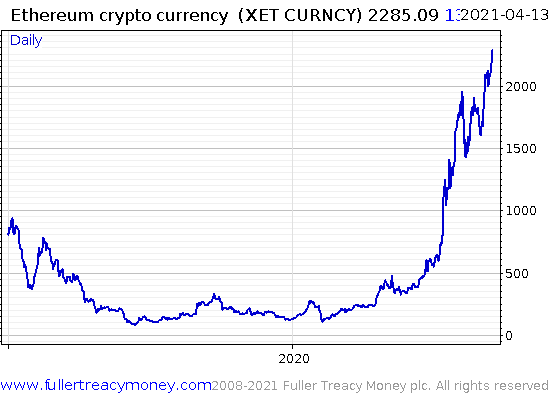 The Ethereum/bitcoin ratio, indicating the market’s preference for the altcoin over the older BTC continues to trend upwards: 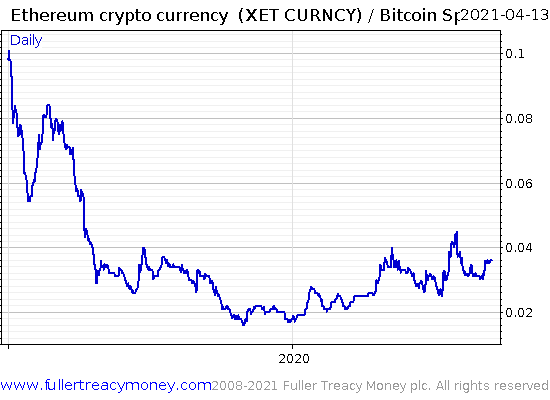 The question is, how long does this last, and how big does it get? Because you certainly don’t want to get caught on the bad side of this market.

At the time of writing, an altcoin called Dogecoin (created as a joke) has a value of over ten cents, putting its total market cap at over $17 billion. Just the other day I watched the launch of a new digital token that my colleague Sam Volkering had told me to watch out for – it more than tripled in value over the course of an hour and ten minutes. Such eruptions in price make you wonder just how long this alt-season can really sustain itself.

But the thing about alt-seasons is that each time we encounter one, it’s bigger than the last. With each evolution of the space, as more investors become aware of it and bring more capital to the table, each alt-season becomes larger and more frenzied. They all come to an end eventually of course, but saying exactly when is key – for the final phase of any alt-season is the most extraordinary period of them all.

How long can this period of alt-contentment last? I’m still mulling the answer, and when I have one, I’ll write it down in this letter. But in the meantime, our resident crypto-bull Sam Volkering has written a compelling article on a certain metric you can use to gauge when alt-season is over – a ratio anyone can check using a freely available website. You can read his article here at no cost – I recommend you give it a read.

PS And if you haven’t checked this out, I recommend you give it a look too. While bitcoin takes a back seat during an alt-season, it’s by no means forgotten…