ABERDEEN, SCOTLAND – Bitcoin finds itself at a critical juncture. To my eyes, it can only go one of two ways – we’re on the cusp of either a parabolic blow-off top, or a bear market back to the likes of $20k. No middle ground, no hanging around. It’s one or the other.

As I said on Monday in Viva Americana, I believe that intervention from the Federal Reserve in the debt market (either interest rate cuts, money printing, or promises of either) will be key to sustaining the rally in tech, and in turn, BTC. There are already hints that this is coming, with Fed governor Lael Brainard saying that some of the market moves last week caught her attention.

Bitcoin is driven massively by market momentum: the phenomenon where high prices lead to higher prices, and low prices lead to lower ones. While you can see market momentum at work in plenty of risky assets (there’s even a momentum exchange-traded fund (ETF) full of stocks particularly sensitive it), the degree to which it effects bitcoin is so extreme as to be unique.

It’s this force which makes every major bitcoin bull market culminate in a parabolic, brutal move higher – like in 2017 where BTC went from $6k to almost $20k in the course of eight weeks. While the performance so far over the past 12 months has been extraordinary already… I think we haven’t seen the final act of this crypto bull market yet. And I’m not the only one.

As I write this, bitcoin is now back above the $50k level, having resurfaced from its plunge down to $43k. The Twitter account BTC_Archive posted a good chart the other day showing how 30% pullbacks were par for the course during the 2017 bull run. It’s a good reminder of how many times it felt like we’d reached the top, when we hadn’t: 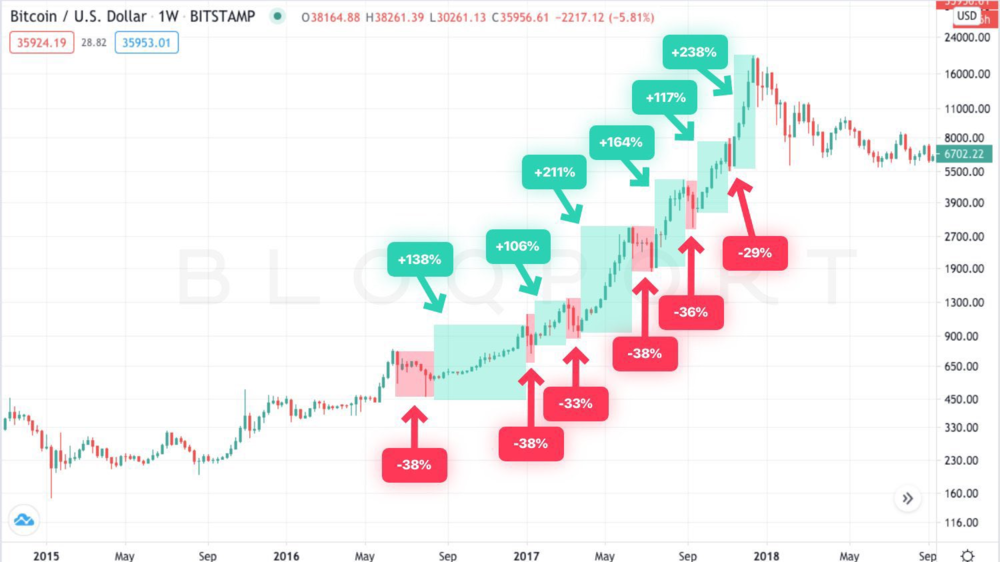 I think the latest pullback we’ve seen over the past week is similarly “transitory”. But as I said earlier, I think the future of this bull market depends on how quickly the debt market is calmed – for if bitcoin’s upward momentum runs out, it’ll rapidly begin gaining momentum to the downside.

I confess that my cautiously bullish attitude here is partly gut instinct. I am not a bitcoin perma-bull who believes bitcoin will always and forever do well. While I treasure bitcoin, it trades in cycles which come and go; and this cycle will end at some point. The question is when – for the greatest moves higher are always saved for the final act. Bitcoin bull markets always end with a bang – never a whimper. And I think that “overdrive” stage has yet to come…

To close with today, I’d like to show you a snippet from my colleague Akhil Patel – our resident expert on investment cycles. He gave his views on what drives bitcoin’s price action in a recent edition of Frontier Tech Investor, and while of course I can’t show you all of it (you can get a subscription here to read the whole thing), I can show you this segment. Akhil never fails to present a unique view on the market, and he didn’t disappoint:

If there’s any concept even more misunderstood than money it is economic rent. It sounds like an obscure economic term but it’s the economic force that binds our economies together. It plays the role in economics that gravity does in physics, the foundational law that is unseen but which underlies all observable phenomena…

Economic rent is the surplus that is generated around the possession of an asset whose value is derived not from its input to the cost of production but as a gift of nature (as fertile land or the electromagnetic spectrum), the presence of a large community (such as urban land) or licences (such as taxi medallions or banking licences). As the community grows and demand for the scarce asset increases, its value goes up exponentially, particularly when banks lend against it. There are no limits to how high a rent-based asset can go up in price other than how badly people want it because higher prices will not create more supply.

The real estate cycle is driven by speculation in economic rent, principally land values which are by far and away the most valuable asset class around (far more so than global stock markets or bond markets – combined).

The cost of mining bitcoin is much lower than its traded price; this difference is essentially pure economic rent. Assets that generate rent are the ones most heavily speculated in, which is one of the reasons for the enormous hype surrounding the coin and the wild surges in price.

Elon Musk should know. As an engineer he may be the Tony Stark of our era but he knows when he’s on to a speculative gold mine. Tesla’s main profits are generated by the sale of carbon credits – a form of economic rent that derives its value from increasing controls around environmental pollution. Next year, Musk will be able to add the enormous bitcoin rents holdings to the profits of his company. A lesser consideration for his accountants will be the number of cars he’s built.

So if bitcoin generates rent, what are the lessons from history?

Every real estate cycle, particularly the second half which is where we are now (see Figure 1 below), ends up bringing a new generation of investors into the market, wishing to speculate and take their share of the rent. This cycle there seems to be a lot of emotion with this new generation. In addition to their views on cryptocurrencies, you also have the Robinhood crowd that want to take on Wall Street, using low-cost trading platforms and social media.

But new hype in investing is not unique to this cycle. For example, in 1918, investing in the stock market was something that only 2.5% of American households did; by the peak of the cycle in 1929, this had increased tenfold. New money drove the great Roaring Twenties bull market to its peak.

But the second half of every cycle has involved new investors jumping into the market, and often it’s through the desire to participate in the profits arising from a new technology. In the UK of the 1890s, the new technology was the bicycle and shares in cycle companies experienced a bubble.

In the 1840s in the UK, it was railway stocks (similarly in the 1850s and late 1860s in the US). In the 1820s, it was canal stocks. The technology changes but the same dynamic applies to the second half of every real estate cycle.

These movements can be prodigiously profitable but ultimately you need to know when things have gone over the top, particularly in the year or two before the anticipated peak. This is where knowledge of the real estate cycle is so valuable…

I’ve received a lot of emails in recent days in my Capital & Conflict post box ([email protected]) – plenty of interesting questions, theories, and observations. We’ll explore some of them tomorrow…