CHEDDAR, SOMERSET – The results are in…

Last week, I asked you if you were feeling bullish or bearish on bitcoin. It’s not the first time I’ve asked the readership of Capital & Conflict such a question, but with the market evolving so fast it’s worth keeping our intel fresh.

My question specifically was, “Do you think the price of bitcoin will be lower than it is currently by the end of the year?” The price back then was $38k, and we’ve seen a fair bump higher since (it stands at $45k at the time of writing), but Hogmanay is still a long way off and this is a market where anything can happen…

Before we get to the poll results, I did receive a reader email on the subject I’d like to address. A couple of weeks back in Dubble? I made the bullish case for bitcoin, highlighting the upcoming roll-out of an upgrade to the bitcoin network called Taproot. One reader wanted to know how such upgrades are possible in a leaderless network:

To my disadvantage or otherwise, I don’t “get” Bitcoin, though am closely following its progress. I know it was invented by Satoshi Nakamoto and had assumed it was somehow previously coded just “existed”. Now I read in C&C that the Taproot software update is coming late in 2021. So who/what operates BTC and how do they benefit from it/the software updates? (and pardoning my ignorance!)

Lacking a leader or central authority, bitcoin operates upon a system of network agreement known as consensus. Updates to the bitcoin protocol are proposed by developers, and if a large contingent of network participants (miners and nodes) want to implement the change, they do. Not every participant needs to implement the update, provided unanimous consensus on the history of bitcoin transactions can still be reached.

If unanimous consensus is not reached, things start to get interesting. We saw this take place back in 2017 in epic fashion – when the implementation of an update to the protocol descended into chaos. It was called Segregated Witness, or “SegWit”, and was so contentious that a civil war broke out within the network. The bitcoin community, the blockchain of past transactions, and the currency itself split, leading to the existence of two bitcoins: bitcoin (BTC) and Bitcoin Cash (BCH), with both camps claiming that theirs was the “true”, “real” bitcoin.

Bitcoin investors meanwhile, found that they suddenly had title to a quantity of Bitcoin Cash equal to their bitcoin holdings, and were free to choose which they preferred. Bitcoin Cash (referred to pejoratively by some as “BCash”) still exists, but it is a shadow of its older brother. The price of BCH at the time of writing is around $620 – or 0.013 BTC.

Thankfully, the Taproot upgrade is not nearly so controversial as SegWit, so we’ll be spared the “no true bitcoin” debate this time around. But this update (due November) will be major nonetheless – and as I said last week, I think it will be a very bullish catalyst for BTC.

Now, on to the poll results… 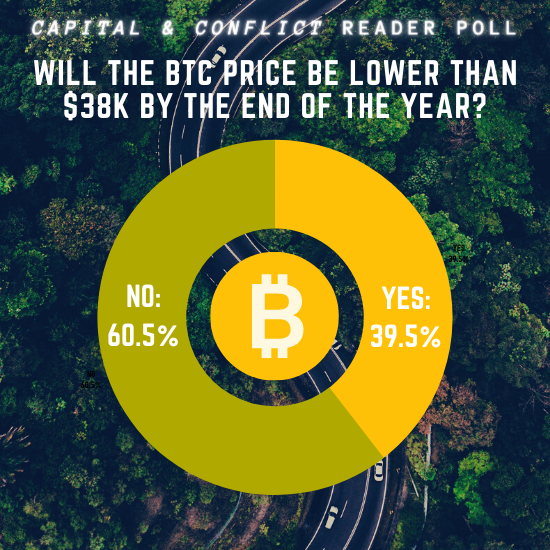 Close enough to 60/40 here in favour of the bulls!

Now changing tack slightly, I’d like to address an elephant in the room here at Capital & Conflict.

You will have realised that more often than not we are sending you content from our sister publication Fortune & Freedom. We will be deciding upon the long-term future of Capital & Conflict soon, and I will keep you abreast of all developments – but following the success of Fortune & Freedom and the future projects I will be working on over with Nickolai and the team, we heartily advise that you sign up for Fortune & Freedom here to continue to stay ahead of the latest articles and podcasts.

But as always: if you don’t like our content here at Capital & Conflict, you are free to unsubscribe at any time by clicking the link at the bottom of this email.

That’s all from me for now. Be sure to tune in tomorrow at 10am to our live YouTube show, where I’ll be discussing the latest action in the gold market with John Butler ­– and grimly celebrating fiat money’s upcoming “golden anniversary”…