If the barman says this, it could be a “BUY” signal…

If the barman says this, it could be a “BUY” signal…

It’s been a long time since I began working here at Southbank Investment Research, dear reader.

In reality it’s been three years and a couple of months. I’ve changed a lot during that period, which is likely why it feels so long.

Similar to now, I was working remotely my first few days on the job back in 2017, as was everyone else at Southbank Investment Research that week. This was not due to any corona-branded exports from the People’s Republic of China of course, but instead due to a jihadi terror attack down the road at Borough Market the weekend prior. The whole street was shut down as a crime scene, and I arrived at my new job via email to find everybody scrambling to keep the business running from their homes.

Unlike now, that lockdown didn’t last very long. After a few days the red tape was lifted, and I could head into the office for the first time.

What I’d like to dwell on today is not what occurred on that first day in the office however, but instead what happened when I headed outside that lunchtime.

At that time, there was a pop-up bar opposite the office which served coffee and soft drinks during the day and then switched to booze at night. I headed there to grab a coffee, intending to sit outside and enjoy the sunshine with it.

It was a young Spanish fella behind the bar who served me. And as he handed me the card reader to pay for my cappuccino, he asked me if I’d be interested in paying with bitcoin. They didn’t have the facility available yet, he was just asking customers if they’d be up for it. I got the impression he wanted to propose the idea to his manager.

I told him yes, and pocketed the memory for safekeeping. It was the first time I’d been asked that, and it felt like a signal. When I returned to the office a half hour or so later, I mentioned it to one of my new colleagues. “Why would anyone want to pay with bitcoin?” he said with a snort. I’m not convinced he really knew what bitcoin was at the time.

This was halfway through 2017. Bitcoin had been having a very strong year, but it was before the colossal boom the year is remembered for. The enthusiasm was there, but the mania had yet to arrive – it was still being seeded, planted by folks like that barman.

One year later, the boom had turned into a brutal bust. All of the naysayers in mainstream finance and the media who had been decrying bitcoin as a fraud, scam, Ponzi scheme, etc, on the way up doubled their volume, believing themselves vindicated. Bitcoin was dead (again) they said, everybody should have listened to them in the first place, and now we could draw a line under the whole messy affair.

But of course, they were wrong.

Three years after my first day at the office and that encounter with the bitcoin bartender, and I’m writing this letter from my local pub.

I’m sitting here not because I need the stiff stuff to function (not right now, anyhow), but because it marks a nice change from the boxy confines of my flat.

I knew I’d be writing about bitcoin today, as we’re getting ready to release a bumper series of interviews with experts on the topic – and I think you should sign up to watch them – but I didn’t know exactly what angle I’d take with today’s letter.

But I didn’t need to think much about it. For just as I was setting up my laptop at my table here, I overheard what a pair of fellas perched nearby were talking about… and suddenly I was three years younger, paying for a cappuccino.

Some things have changed, some things haven’t, but bitcoin hasn’t gone away – and it’s still being discussed at watering holes. I didn’t catch exactly what about bitcoin these chaps are discussing, but I think it was about making money from it (BTC certainly has applications there, that’s for sure).

I’ve posted this chart before in Capital & Conflict, and it’s slightly out of date, but I’m gonna post it again.

This, I believe, is the strongest rebuttal to the claims that bitcoin was just one big bubble with no future, akin to tulip mania or other historic market manias.

None of the other overhyped assets recover in the years following their collapse in the manner that bitcoin has – they all just wither and collapse: 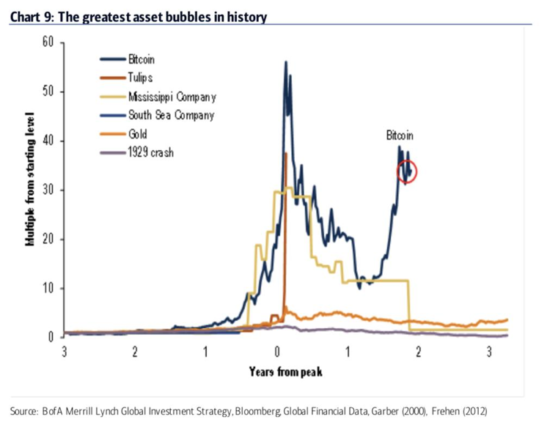 Only bitcoin kept people interested after the mania wore off. Kept ‘em talking about it in pubs and bars with their friends. A lot can change in three years… but bitcoin ain’t going away.

PS I’ve not focused much on the actual nature of bitcoin in today’s letter. You’ll learn all about bitcoin’s function and potential in our upcoming video series, but if you want a quick crash course on what bitcoin is and how it works, my colleague Kit Winder wrote up a very accessible guide to BTC yesterday – complete with his own experiences of 2017.