Hot money, high gas: the energy crisis in the ether

Hot money, high gas: the energy crisis in the ether

Let’s start the week with an energy crisis, shall we? I can’t have been the only one in dire need of coffee this morning…

The phrase “skyrocketing gas prices” may bring images of the 1970s to mind. Global energy supplies were strangled twice that decade: in 1973 with the Arab oil embargo in retaliation for US support of Israel during the Yom Kippur War, and then again with the Iranian revolution in 1979. Both events forced the most basic economic input of all – energy – to become almost unbearably expensive, creating many a strange spectacle.

The effects were most pronounced in the States, where the native cars were and are especially thirsty for gas. Petrol stations flew traffic-light flags to indicate if they had any fuel in stock. In the event that black gold was available on tap, the drama didn’t end there. You’d only be able to buy some if your number plate corresponded with the date – if it ended with an even number, then you’d only be able to buy on even dates, and vice versa.

I’ve even heard that some petrol stations in the States would only accept “old money” as payment: silver coins, no banknotes. It’s an example of a dynamic we described back in March: that when crises strike, humans seek physical silver (a fact deceptively hidden by the “spot” silver price).

But today I’d like to tell you about a different type of “gas” crisis. One that’s been unfolding out of sight of the broader investment market in recent months. Out of sight of the average investor… in the ether.

I’m talking about this: 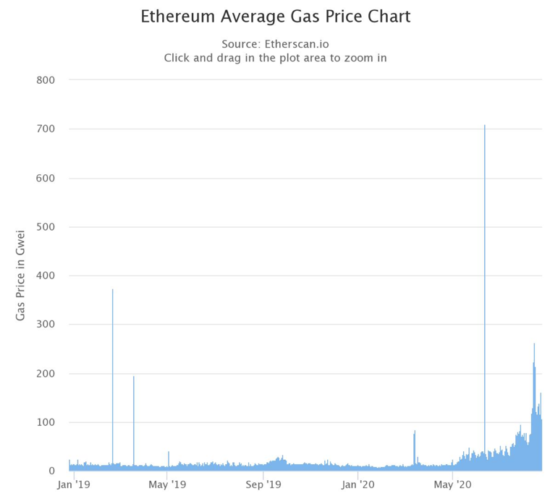 Ethereum is the world’s second largest cryptocurrency, and has been for some time. While it comes in second in terms of total market capitalisation, it has the most developers and programmers working on it. While it falls under the banner of cryptocurrency, the “currency” suffix may be a little misleading: the dream of the “Ethereans” is to create one massive un-ownable decentralised computer, a platform from which all manner of new applications can be born.

That’s the dream, anyhow. So far, Ethereum has become the main platform through which new crypto projects and tokens are born. The “ICO” or initial coin offering boom back in 2017 where new crypto projects were springing up everywhere was almost entirely facilitated by folks using Ethereum to mint new currencies.

What you’re looking at above is the cost of making a transaction using Ethereum – sending ETH tokens to another user. If you want to spend Ether, you need to give the network miners a bit of it too as a reward for processing the payment – this is known as the “gas” price. It’s a bit like paying a tip or a sales tax whenever you transact in Ether – a little bit you stick on top of the bill.

What makes this dynamic interesting is that you can choose how much gas you pay for a transaction to be processed – the higher it is, the faster the payment will go through. Too low, and the payment might not be processed for a long time or even at all as the miners focus on facilitating other, more rewarding payments.

Back during the ICO back in 2017, wily investors who were bullish on a new ICO would deliberately pay massive gas fees (effectively, giving the Ethereum miners a massive tip) to buy up more of the new token ahead of other speculators. Those who weren’t willing to pay for high gas would often be unable to buy any of the new tokens as their total supply would be seized by these “gas guzzlers”.

Activity like this led to higher average gas prices in general, making the cost of any ETH transaction more expensive. This confounded folks who were trying to argue that using this new digital currency was cheaper than Visa and PayPal.

But while the 2017 ICO boom came and went, another massive surge in gas prices has been taking place as you can see from the chart above. This time, Ethereum has become a platform for the “DeFi” movement, a trend which has been successfully summoning vast quantities of ETH investment out of the ether (pardon the pun). The boom in transactions is once more making any ETH transaction far more costly, and taking more time.

“DeFi”, or decntralised finance, is the latest evolution of crypto – an attempt to dissolve the gatekeeping of legacy financial institutions and take markets totally into the internet domain. Sam Volkering wrote a concise primer for it in Exponential Investor recently, which you can read here.

But from a crypto investor’s perspective, this is “a good problem to have” it’s a sign not of dysfunction, but of hyperactivity – of huge investment flows entering the space.

Ethereum itself may be well off the heady $1,200 mark it managed in 2017, but it’s nearly quadrupled since its March low. 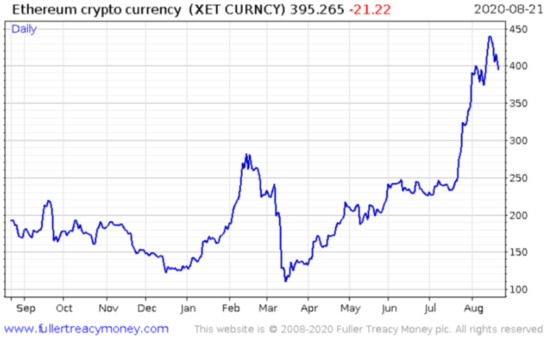 For the DeFi tokens themselves however, these gains are paltry.

For example: about a month or so ago a project called Yearn Finance released its YFI token.

The wild heady days of 2017 have returned to crypto. Not broadly just yet – so far the wild mania is confined to the DeFi sector. But the bulls are getting louder. And they’re stepping on the gas.

Tune into our crypto docuseries and stay ahead of the curve here.

PS If you have any questions on crypto, my colleague Sam Volkering wants to answer them! He’s been answering a few in today’s Exponential Investor, which you can read here.