WINDERMERE, LAKE DISTRICT – We have now entered the final phase of the most important market cycle there is, writes our colleague Akhil Patel. The land cycle has crossed its final hurdle, passed its last stopping post (the “mid-cycle slowdown”), and has now entered the endgame. The home straight awaits, a euphoric path of glory… but one that will end in a massacre for investors.

The next few years will be the most bullish of our lives, says Akhil. We will see a more rapid creation of wealth created in this short period of time than ever before. But the crisis waiting on the other side of it will be similarly large…

I doubted Akhil’s predictions when I first joined Southbank Investment Research. But the more of his work I see, the more persuaded I am that the 18-year cycle he subscribes to (which he’ll reveal below) is correct…

Into the second half of the real estate cycle

The past 18 months have provided a fascinating look at the progress of the real estate cycle and how it turns. And even to those (like us) who track it closely, and have studied its history, it has nonetheless surprising how predictably it is unfolding.

It’s important for me to emphasise this last point because the how events have looked have been different to those of past cycles. This time last year, in the midst of stock market meltdown, social lockdowns, shuttered businesses and a health pandemic and panic, it seemed that we had finally encountered something that might throw the cycle off. And my inbox was full of emails asking me that, well, might this time be different?

What a difference 12 months makes. Stock markets are up, vaccines are being rolled, economies are opening, and most commentators are revising growth projections upwards.

Here is my stylised representation of the real estate cycle. Each cycle consists of 14 years up into a peak, four years down into a low. And the 14-year expansion separated into two halves by a mid-cycle recession. 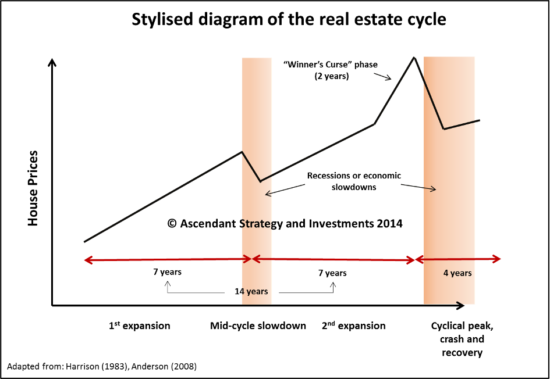 In addition to the broad structure the diagram also makes the point that the mid-cycle recession is not the same – or as severe – as the crisis/depression at the end. This time last year it was hard to convince people of that because things did look bad – and for some families and businesses it has been a terrible time, no question.

However, and this is the key point, the recession was not linked to a collapsing land market that had been pushed into overdrive by an enormous boom in credit. Sure, property prices had become expensive in the major cities across the globe; but the increase was not broad-based and in any case lending had remained relatively restrained.

Knowing this, and how the cycle is structured, I was able to tell my readers in 2019 that we were approaching the mid-point, that a recession or slowdown was on the cards, and that there would be a peak in the stock market at the start of 2020. I did an interview with Southbank Investment Research in December 2019, and alerted them to the possibility of a market panic in 2020.

All of these duly arrived. I am not revisiting these to show off. I am merely reading history and applying it to the present. I suppose if I can claim any credit, it is sticking to my forecasts in the face of seemingly unique events. It is not easy to do but the important thing to remember about the real estate cycle is this: it has to happen because of the foundation of our economies, which is the private capture of economic rent, something I have written about before.

In response to the pandemic governments around the world have enacted enormous stimulus responses, the largest ever seen, firstly to keep capacity in the economy; and then to focus on major capital projects. In addition, interest rates are held at virtually zero and businesses and banks are supplied with plentiful liquidity should they need it.

With growth projections for 2021 being revised ever upwards the response has all worked. The triumphalism is still quiet; but when things properly open up it will be loud and prolonged, just as in the prior cycle Gordon Brown (then UK chancellor) could proclaim an “end to boom and bust” and Ben Bernanke (then one of the governors on the Board of the Federal Reserve) could state that there had been a “great moderation” in economic volatility (i.e., no more boom and bust). The slaying of the business cycle monster is the ultimate quest to which many a central banking or Treasury hero-knight aspires.

This time will be no different.

We are now out of the mid-cycle recession and firmly in the second half of the cycle. What happens now?

As the second half unfolds, it is driving forward by a land boom and lavish public spending for public works (or infrastructure). This is exactly what we are getting now.

In fact, property markets are now at all-time highs as are most stock markets. And while there will be the normal fluctuations that you get from year to year (including the likelihood of a decent stock market correction later this year), we should expect to see a very strong few years in both.

Look out for the following:

Underneath it all there will be an increasing sense that this time is different, that something really has fundamentally changed.

We have now faced down a global pandemic; we are investing to make our lives healthier, cleaner and greener. There are marvellous new technologies being developed and deployed, such as high-speed trains and autonomous, self-driving vehicles. Office workers will have increasing flexibility on how and where they want to work. Perhaps there will also be some social and similar policies to address and quell the social unrest we have also seen in the past few months, which might placate people – for the time being.

All of this will build up into increasingly frenetic real estate activity over the next four or five years. At this point, when things seem brightest and strongest, this will be the time to manage your emotions and avoid getting suckered into grandiose investment opportunities offering ever greater returns.

It really will play out the same as it always has…