ABERDEEN, SCOTLAND – I’m afraid it’ll be another short note from me today – I’ve been called away to conduct an interview with a certain globe-trotting market expert as part of a broader event we’re planning for you. This video is gonna be a doozy, and you’ll be able to watch our conversation at no cost once it’s ready. If you enjoy my daily scribblings here at Capital & Conflict, and – without revealing too much – if you like a certain asset which we cover often in this letter… I can almost guarantee you’re gonna love it.

I’ll be back tomorrow to resume business as usual with a full daily issue of Capital & Conflict. But in the meantime, I’ll let my colleague Kit Winder fill you in on some of the strange events that have been affecting the plumbing in financial markets (not to mention, his own) in a recent note he wrote for one of our sister publications, UK Uncensored…

By Kit Winder, for UK Uncensored

I had a lovely weekend, until Sunday morning.

The combination of weather improving, days lengthening and London opening on the horizon seems to be benefitting the capital’s mood. Until Sunday morning.

I did a fair bit of cycling, saw some new parks and new parts of town, relaxed by a canal watching an impressive singer doing a live set from his canal boat…

All was well in the best of all possible worlds, as Voltaire’s Candide put it. Until Sunday morning.

For on Sunday morning, I discovered a valuable lesson for life, business, and investment.

I discovered that the best time to sell someone new plumbing is just after they’ve had a burst pipe.

I imagine the same is true for cybersecurity after a massive, irretrievable data loss.

Picture the scene. It’s a Sunday morning. No one else is up. Peace reigned upon Blandings Castle and all the rest.

With my cup of tea (lockdown has made me a loose-leaf fanatic, by the way), I was mesmerised by The Ruffer Review, an epic annual collection of thinking about the world of investment.

It all gets a bit hazy at this point. It all happened so fast, officer.

I got up, turned into the open-plan kitchen and saw a dribble of water, nay, a stream, no, oh hell, it’s gushing out – what the hell is happening?!

By the time the first tea towel hit the floor, three more were required.

It’s flooding the kitchen floor at an incredible pace now. Six towels will soon be overwhelmed. It’s not the dishwasher or washing machine, perhaps under the sink, behind the black board hiding the pipes maybe? 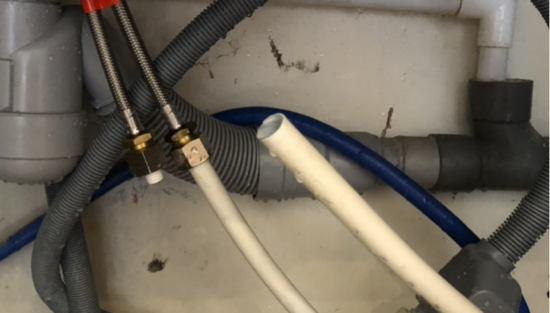 Ideally, Mr Hotwater Pipe, who you can see, would be attached – like his friend Coldwater Pipe – to the metal cable going into the tap.

Sadly, he was not. He was just spewing water at full speed into the air, like a child with a hosepipe on a hot summer’s day.

Now the tale twists, and I must confess something.

Many of you, who are wiser and more street smart than me, will laugh.

None of us knew where the stopcock was in the house to turn off all the water supply.

So I sat under the sink, forcing the pipe into the connection, fighting it like a snake master holding a raging cobra just behind the head. Momentary lapses in concentration were punished with a swift dousing.

Eventually, behind a wall panel in the downstairs loo which we never use… it was found and turned.

Relax, mop, dry, wait for the Pimlico Plumbers to turn up (incredibly quickly).

Now I could go in a number of directions with this analogy.

I could talk about how we take clean water for granted, and how only when the supply is threatened or switched off do we realise how valuable it is to be able to wash our hands, quench our thirst, boil a kettle or take a shower.

Water is the ultimate liquidity risk in many parts of the world, and I have been delving into the space quite a lot lately and am excited to share what I’ve found with you.

Alternatively, I could talk about liquidity risk.

The pipe is like GameStop, you see. With so much liquidity sloshing around, badly laid transmission mechanisms with the wrong compressor or fitting can simply burst.

In fact, super weirdly, I had a glass sat on a tabletop (no heat, no contents) last week which just… exploded. Into hundreds of pieces, spread over a three-metre area. Bizarre.

GameStop, Spacs, the Repo crisis, underage Tik Tok investors and bond market volatility (there was a very bad auction a couple of weeks ago) are all symptoms of more liquidity squeezing through shrinking holes. Pressure builds and releases in mysterious ways.

Speaking of liquidity risk, I also noticed that our old friend Mr Woodford is launching a new fund. Presumably he’ll have learnt his lesson and will just buy blue chip, quality stocks… Maybe the profits from this new venture can be used to pay people the money they lost when his last fund blew up?

Like a modern form of debt peonage, where he has to run funds and divert all profits to former clients who lost their money…

But the real lesson I kept thinking about was this.

When I was on the phone, the nice woman started saying, “So just to run you through the charges, it’ll be £150 for…”

“The charges are fine, just send them”.

And then when the two friendly and helpful guys had solved the problem, they explained that this kind of thing can happen with push fittings, and we’ve got six. Pimlico can’t guarantee push fittings, but if we wanted, they could come back in a couple of days and replace the whole lot with copper pipes, and some other clever connectors and isolators or, heck, I don’t know.

I think it was quoted at a few hundred quid.

I had to get the landlord’s blessing, but I was desperate to say yes.

I was imagining if the pipe had burst while we slept. Or even if I hadn’t walked into the kitchen as the exact moment when it had happened.

Just a few minutes more could have been seriously damaging.

We are, thankfully, going for the upgrade.

When I reflect, I realise that when you’re watching water pour into your kitchen, the idea that you might spend half an hour ringing various plumbers to try and save twenty quid is crazy.

And I realised that if someone had tried to convince me to upgrade our pipes last weekend, I’d have listened to the arguments about the risks of push fit connections and said, yes, sounds fair but we’ve been here two years and nothing has ever happened. For £300, I’ll take my chances thank you.

After the leak, he could’ve charged double, and I’d have begged my landlord to go for it. Triple, tenfold – in that moment, who cares?

The best time to sell someone better pipes is just after they’ve fought a flood.

The best time to sell someone a screen protector is just after they’ve smashed their phone.

Everyone wishes they’d sold stocks or bought protections after a market crash.

The time to protect your wealth is now, before it’s too late.

But by the time the crash has come, the price of the things which might protect you have all shot up.

Investors should think about protecting their wealth while they still can. By the time most people realise they need to shift from trying to grow their wealth to trying to protect it, it’s too late.

What kind of things am I talking about? Well, we’ve just seen a collapse in US and global tech stocks out of nowhere, which has been brutal and swift. Last March has been quickly forgotten by many, but it could very easily happen again.

Or, what about money? Bitcoin surges, gold is well up on last year. The supply of money has accelerated at unbelievable pace, just as it did during the world wars or the 1960s, before the last two inflationary episodes.

Just like in my kitchen, liquidity can explode in curious places.

The rise of cryptocurrencies, paralleled with unprecedented central bank mischievousness, has led more people than ever before to ask questions about the nature of money.

A tipping point may come when the world cries out in near-unison, fiat nihil, which Google tells me might mean “fiat currency is worth nothing”.

At that point it will be too late.

The lesson I learned on Sunday morning is one of the most valuable lessons in investment.

Buy protection when you can, not when you need to.

If you are interested in cryptocurrencies or the concept of a run on fiat currencies, it’s worth looking into how digital assets might be able to protect your wealth now, before it’s too late.

All the best, and fiat nihil!