SOUTHWARK, LONDON – Last Friday in Dou₿le Trou₿le I showed you a note from my colleague Charlie Morris, where he illustrated just how extraordinary the phenomenon of bitcoin continually doubling in value is.

He’d written that note at the beginning of the year when bitcoin had just completed its 19th doubling at $31.5k, and he was questioning what it would take for bitcoin to reach it’s twentieth double.

This ability to keep on doubling in price to such a degree, and in such a short space of time (just over a decade) is almost a miracle in financial markets – and the saga is not yet over.

Lo and behold, we witnessed bitcoin’s 20th doubling on Wednesday when the BTC price touched $63k – and Charlie has since written an update. I thought I’d share it with you today. Not only because of this event we’ve been working on, but because this is a spectacle that deserves to be witnessed – be you an investor in bitcoin or not.

On its 20th double, bitcoin has risen more than a million times

On Wednesday, as Europe was enjoying morning coffee, we witnessed the 20th doubling in the price of bitcoin as it broke through $62,914.56 for the first time.

I can’t think of any asset, ever in history, that has doubled 20 times – and definitely not 11 years after it was first priced. The world’s 18.6 million bitcoins are worth $1.2 trillion. We would estimate that 25% are lost, but still, it’s a trillion dollars.

Amazon, Microsoft and Apple are worth over a trillion, but investors were never able to get in so early. Microsoft has doubled 11 times since the IPO in 1986. The others have “only” doubled ten times. Other than bitcoin, I can’t think of any better publicly available investments throughout history – especially when you consider how quickly these companies have prospered.

If you think 20 doubles is no big deal, it is 220, which is 1,048,576x. Anyone who bought bitcoin in early 2010 saw each $1 invested become worth more than $1 million. It’s incredible. Few people will have taken advantage of that, and even fewer will have held on until now.

Each double helped spread the word as there is no better crowd-puller in finance than a rising price. I became interested shortly after the 11th double in 2013. Then in November that year, the price doubled three times in a single month, which was incredible to watch. This doesn’t happen in stock markets!

Putting it into epochs, the first epoch* saw eight doubles, the second saw six, the third saw four, and the current has seen two. 8, 6, 4, 2. I hope no one extrapolates this. I’ve seen hugely popular stock-to-flow models built on less.

The most exciting thing about bitcoin’s 20th double is that it happened on much lower volatility.

A breakout on low volatility

That is exciting because lower volatility is telling you to believe the trend, in contrast to high volatility, which should make you wary of it. The following table records the level of 30-day price volatility at the time of each doubling. 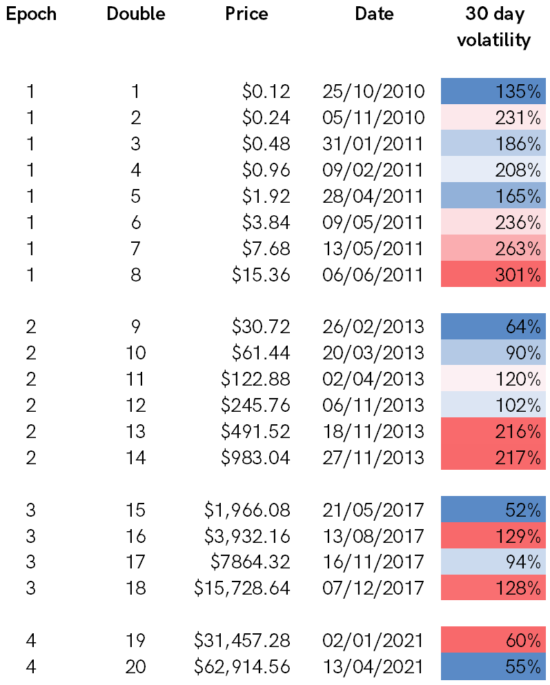 I have colour-coded by epoch, with red marking the highest readings. Typically, the early doubles occurred on relatively low volatility, in contrast to the later ones on higher volatility. Bitcoin’s historic average volatility has been 92% since 2010 and 63% since 2015.

Epoch 4 has just seen two doubles on low volatility. That is encouraging because market peaks are often marked out by high volatility. That also applies to crashes, such as November 2018 and March 2020, when the price moved sharply.

Volatility back below the half-way mark 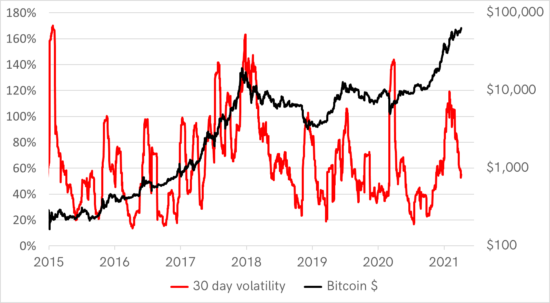 Volatile tops are telling you to be prepared for a sharp reversal, just as are volatile bottoms. In other words, volatile price spikes upward should be taken with suspicion, while volatile crashes should get you excited.

Following a surge in price since October, it is comforting to see volatility falling below average. It means the market is calming down and that a swift correction is less likely than it was a few weeks ago. By no means does it forecast prices to the moon, but it suggests the trend should be believed rather than questioned.

High volatility is a sign of an asset’s immaturity and shows that it is speculative. In contrast, a less volatile asset provides a greater degree of comfort and certainty. That is why institutional investors like bonds so much – they do exactly what they say they will do.

It doesn’t seem to matter that bonds will deliver negative real returns (< inflation). Many institutional investors don’t care about that sort of thing, provided they receive management fees and avoid career risk. Sad but true.

I have long argued that if bitcoin wants to attract institutional capital, it needs to calm down. Even the current 54% is high compared to other assets. Gold volatility is 14%, and the S&P 500 is 16%. There is still a long way to go before the mainstream institutional investor deems bitcoin a must-have asset. But take comfort that recent events have brought that one step closer.

That is certainly the other Charlie’s view (Charlie Erith, fund manager of Bitcoin and General Fund) at my company ByteTree, who is more bullish than Michael Saylor. He recently wrote:

Institutional adoption also tends to bring greater pricing discipline. It will be no surprise if we continue to see declining volatility in the asset price as a result. This has an added benefit. Lower volatility enables institutions, for whom volatility informs risk-weighting decisions, to allocate more to this new asset. It is a virtuous circle.