Cast your mind back just over three years. Back to February 2014. What were you doing then? Maybe in a different job? A different house? Maybe you were looking at different kinds of stocks to buy? Maybe you were trying to figure out how to build your wealth long term.

That might sound a little cryptic. And it is, I guess. So let me cut to the chase. For the last seven years I’ve been researching and investigating the world of cryptocurrency.

It started with bitcoin back in 2010. It’s since expanded to almost every cryptocurrency that’s in existence. And there are now well over 800 different cryptocurrencies.

What a lot of people don’t understand is that these cryptocurrencies are opportunities. They’re a chance, right now, for everyday investors to grab a stake in the biggest wealth creation opportunity the world has ever seen.

Now, I’d like to tell you about the time I was thrown into the middle of a bitcoin debate, on live US TV, without even realising it…

As I said, this is an area I’ve been involved in for around seven years now. And in February 2014 I was a guest on a US TV to talk about bitcoin. Before the show I was told that I’d be appearing on The Rick Amato Show on the One America News Network and that I’d be talking about bitcoin. Sounded good to me. 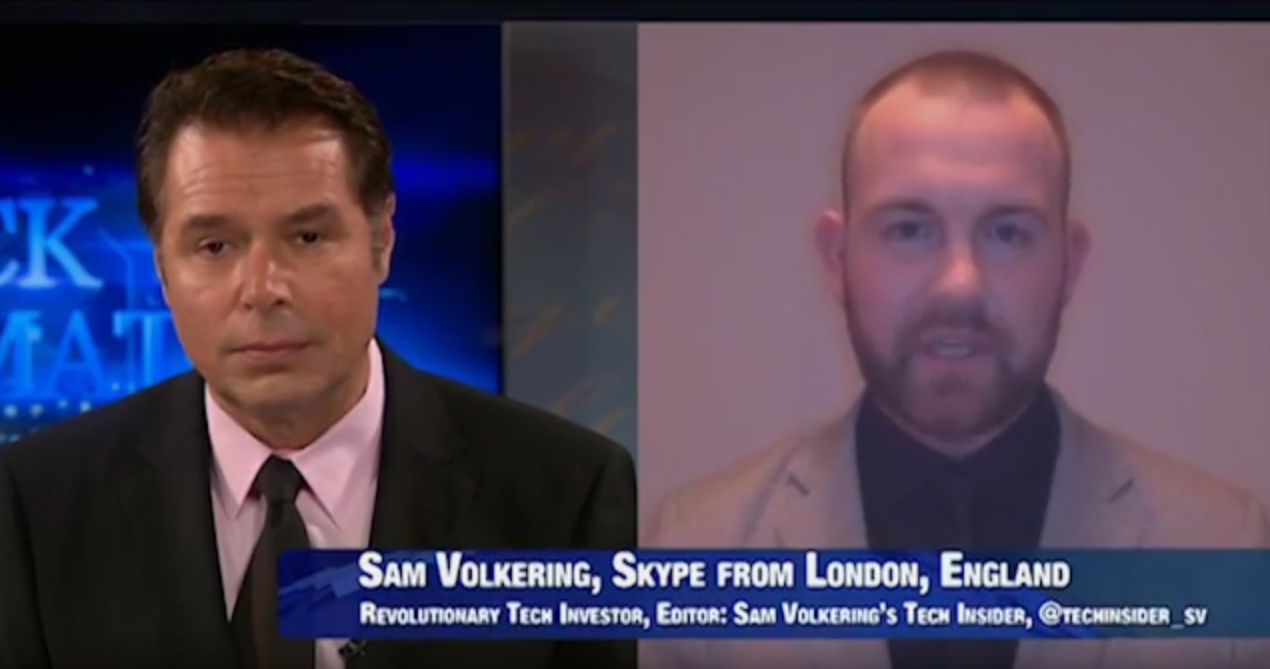 Except when they dialled me in through Skype and we went live I found out, on the spot, that I was actually in a mini-debate with an anti-bitcoin guest. That guest was Andrew Blount, who was at the time the Republican candidate for governor of California.

As pointed out in the opening introductions, Blount is a software pioneer and entrepreneur. And here we were to go head to head with our views on this crazy new “currency” called bitcoin.

Now I won’t publish the full transcript. But I’m going to give you a snippet of it. That way you can understand that my view on bitcoin has been consistent from back when it was trading for a couple of hundred bucks.

But if you do want to see the full video, you can head to my YouTube channel and watch it here.

Here’s a snippet of the interview…

Rick Amato: Andrew Blount, when I hear Sam give us an explanation, it sounds like, to me, again I’m using laymen’s terms I’m not a tech guy. It sounds like a bunch of uh, bored high school kids who are very smart trying to have a good time with something. That’s how it sounds to me.

Rick Amato: Sam put it, Sam oversimplified, I get that. But you, you are a very successful software pioneer, entrepreneur. But you are suspicious of this whole virtual currency idea.

Andrew Blount: Those pictures you just showed of coins, aren’t real, Rick. And neither are bitcoins. It started out as a scam, it’s run its course as a scam, and it’s going to end, as a scam. Bitcoin simply don’t exist, they’re not real. Now they, it’s worked in many different ways. It’s even got people that want to be entrepreneurs buying algorithms and buying pieces of hardware they’re plugging into the computer in order to “mine” these bitcoins. In order to be able to “solve” and come up with more coins. It’s as if we decided that bubble-gum wrappers were going to be worth something and you buy that bubble-gum wrapper for US$5 from me, I buy that back for US$10, you buy that back for US$20, I buy it for US$30 and um, bubble-gum wrappers are suddenly worth a thousand bucks. It’s a bubble-gum wrapper, Rick it’s not worth a thing.

Rick Amato: Sam, as I listen to Andrew Blount it kind of reminds me of the, of the um, famous “Tulip Mania” story in Holland centuries ago.

Rick Amato: Do you share his pessimism on the integrity of bitcoin?

Sam Volkering: No. Not at all actually. I completely disagree, with all due respect. For me, look, the thing with bitcoin is, you’re right, it depends on what kind of value people place in it. Because at the end of the day it is, it’s a mathematical problem online that’s the crux of what this is all valued at. But the thing is that people place more trust now in digital currencies online, I’m talking about generations that are coming through from kids that are born now – in ten, 20 years’ time are going to only know what bitcoin is. Because “currency” to them whether it’s the US dollar or the Aussie dollar or the pound is basically worthless to them because they can’t use it in a seamless transaction online. It’s too difficult. And what we want with technology is for this seamless payment system. So bitcoin has become more than just a currency or “bubble-gum wrappers” it’s become an entire online infrastructure. Actually if anything [it has] become a parallel monetary system to what we’re all used to today.

This actually gave both Amato and Blount something to consider

And it almost felt like I had convinced Blount about the potential… almost. We continued to discuss the potential long term.

Rick Amato: Well alright. Sam it’s an interesting world and, uh it sounds like, am I oversimplifying, Sam when I say what this is, is a matter of perception.

Sam Volkering: Ah, yeah I think you are oversimplifying it. I think it’s much bigger than that and it’s going to be around longer than we’re alive.

That’s the way I see it, and that’s why I’ve written a new book to provide tangible, actionable advice on cryptocurrencies to UK investors. And the best part is, as a Capital & Conflict subscriber you can get your hands on a copy for free.

Bitcoin was the first. But there are now other opportunities to profit from cryptocurrency. In fact some could even see bigger price rises than bitcoin has seen. And let’s not forget that bitcoin went from just US$0.06 in 2010 to US$3,016 on 16 June, this year.

And, in my view, there’s much, much more to come from this sector.

The emperors will bow, but their stocks will first

Badly disguised signs of a bubble

Kodak has joined the growing list of companies with spiking stock prices and is perhaps the most surprising of all. What these companies share is a good story, not a great business. In this episode, Boaz Shoshan, Kit Winder and…

Dear reader, I- Hmmm. So, uh… you remember that company that used to make cameras when you were a kid? Kodak? Apparently it uh… makes drugs now. Got three-quarters of a billion dollars as a loan from the US government…

Happy hump day, dear reader. I commented in yesterday’s note how the silver market had gone wild in the middle of the night – turns out some of you were involved! As one reader writes in: So, Boaz, were you…