BTC on the precipice, Welsh gold on offer, and the beer-only diet

BTC on the precipice, Welsh gold on offer, and the beer-only diet

ABERDEEN, SCOTLAND – Last week, I asked you if you think the bitcoin price has peaked, or if the bull market still has more juice in the tank (Power Games – 4 March).

Is it all downhill from here, or have we yet to see bitcoin’s finest hour? The results are in… 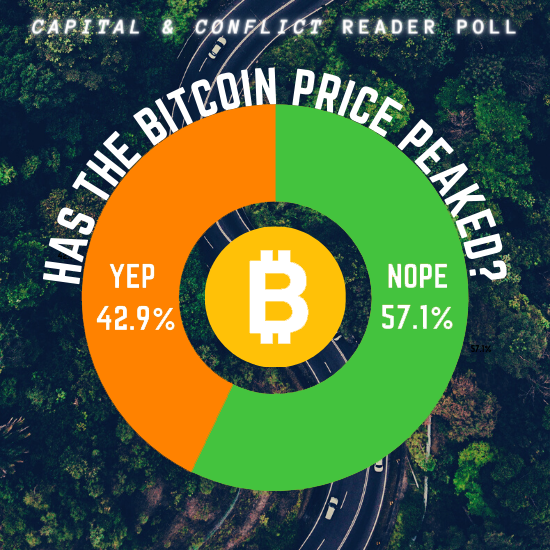 While the bulls are in the majority, it’s a slim lead. Plenty of you think it’s all downhill from here.

This echoes my feelings on bitcoin quite neatly right now (see: Satoshi’s Last Move – 3 March). I think we’re either at the cusp of a final parabolic move higher for bitcoin, where it makes astounding gains in a short period of time (see November-December 2017 for an idea)… or we’re at the end of this bull cycle, and bitcoin’s in for a brutal ride down to $20k. No middle ground – it’s one of the other right now. With BTC grazing $50k over the weekend again, it looks like the latter view may be coming to fruition… but let’s watch.

I’ve been receiving quite a few emails on gold recently after I acquired a splendour of sovereigns:

I am a subscriber to Gold Stock Fortunes… and love watching the interviews from the 2019 Gold Summit you made. I am thinking about the Royal Mint ETC tracker which also enables you to redeem as physical gold. Has this ETC been covered anywhere in Southbank’s research as I am struggling to find it?

I have referred to the Royal Mint’s new bullion fund a couple of times in this letter, though not in great detail. For those not familiar, the Royal Mint has recently launched an investment product called an ETC (exchange-traded commodity) for investors wanting exposure to the gold price. Investors can buy and sell shares in the ETC (the $RMAU fund) through their brokerage accounts, and redeem those shares for physical bullion from the Mint’s vaults in Wales if they so choose.

If you just want to trade the gold price, or want gold in your portfolio but aren’t comfortable with taking physical ownership of bullion, this may be worthy of your attention. The Royal Mint has to be one of most trustworthy custodians out there – but you would be putting your trust in it nonetheless, and we love gold because it is a trustless asset. Also, the ETC is priced in dollars, so British investors are taking on currency risk if they buy it.

I must admit, I’m slightly disappointed by the whole thing. Back in 2017, the Royal Mint was planning on launching a gold-backed cryptocurrency which folks would be able to spend like money – a very exciting and subversive project. But it was all called off, and this ETC appears to be all that remains of the endeavour.

I attended a presentation given by the Royal Mint a while back where an audience member asked them what had become of the crypto project: turned out they’d become scared of getting involved with crypto as they thought it might tarnish their brand. What a wasted opportunity…

To give up food and rely on beer for 40 days seems the ultimate contrarian move. Surely one is supposed to give up alcohol not food.

I told a Nigerian Priest once that it was more important that we behaved decently and considerately than stopped eating/drinking [for Lent]. He was reminded to tell me that a friend of his was held up at gunpoint on a bus, and instinctively went for a cigarette. He offered one to the gunman who declined saying, ‘I have given up smoking for Lent.’

A few readers have been asking how my beer-fast for Lent is going, so I thought I’d give a brief update. I must say, it’s been quite an experience so far. In the fortnight since I stopped consuming food and milk, I’ve lost more than a stone and a half. Folks keep telling me in worried tones that I look pale, but I’m all good.

As I said when I began, I’ll stop in the event my health seriously deteriorates, but so far I’m alright. That said, I’m sure this diet is as unhealthy as it sounds, so don’t take my survival as encouragement to follow my example.

I was right to take a few days off work at the beginning. I was absolutely exhausted to start off with, but after a while my body got the message and my energy came back. I don’t get hunger pangs any more, just really specific cravings – sometimes for food I haven’t had in years (tuna and sweetcorn sandwiches – why?!). And cigars seem to smell even better now for some reason.

While I’ve found my stride with the routine (fast until evening, then have a few beers), I find my concentration is still flagging during the day. While I’ve managed to maintain my focus with black coffee and the occasional zero-sugar energy drink so far, I’m not gonna let this get in the way of my work. I’ve pencilled in the one-month mark as a potential finish line for the fast – that’s a little over a week from now. That’s not the entirety of Lent of course, but I’d be happy with it.

Also, I’ve expanded the range of beers I’m drinking to more than just Doppelbock. While very sustaining, I’ve discovered that it stops agreeing with me when I have more than two in a row, and I need as many calories as I can get – it also adds some welcome variety for the weekly beer podcast.

I’ll be back tomorrow with something special – some might even say, “other worldly”…