ABERDEEN, SCOTLAND – So here we are, at the dawn of 2021 AD. I hope you had a good Hogmanay – nothing too eventful for me this year due to lockdown restrictions, but I enjoyed it nonetheless. If you’re doing Dry January in this environment, I feel for you. I’ve never practiced it, and I sure ain’t gonna start this year…

As we begin the new year, let’s say hello to the elephant in the room – or as I’m beginning to call it, “Apollo 18”: as you’re likely already aware, over the festive period bitcoin has embarked on a moon-mission. NASA only managed 17 Apollo launches, but it appears Satoshi Nakamoto has taken up the task.

I predicted that bitcoin would break to new all-time highs in 2020 back in December of 2019 – and it’s nice to have been right – but even I’m taken aback by just how fast BTC has been moving over the past few weeks. Watching the $20k level get taken out in mid-December, only to see the $30k level get torn open less than a month later on Saturday, has been like watching a cannonball in slow motion.

From where I’m standing, this extreme price action stems simply from bitcoin’s scarcity: there’s just not that much of it out there that is available to buy. Now, hardcore bitcoin investors (the “hodlers”) are notorious for not selling and not even keeping their bitcoin on exchanges – but this has been the case for a decade. What makes things different now is that during 2020 financial institutions arrived on the scene and began hoovering up supply as well.

With Christmas celebrations rather muted this year, my colleague Charlie Morris took some time off from the festivities to make a presentation for his crypto-venture ByteTree, which featured this neat chart. It’s the BTC price (USD) annotated with all the cases of institutional interest in BTC last year: 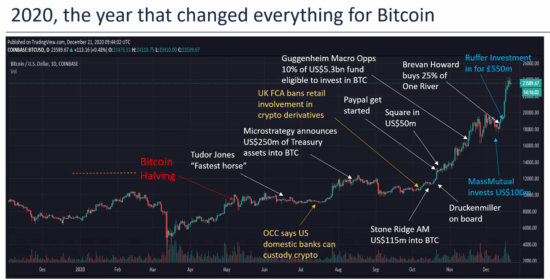 It’s a supply squeeze which I suspect has been causing these big surges. Money is arriving at the market to buy BTC, and even though there is fresh supply coming in from the miners, there simply hasn’t been enough BTC to go around at current prices.

If we were talking about a stock or a commodity, this market would be called “illiquid”. That label is often seen as negative for large investors for it means that the market for the asset in question cannot cope with large buy orders (or large sell orders) without prices moving significantly.

But nothing goes up in a straight line, even rockets destined for the moon. We’ll explore the risks facing this bitcoin rally tomorrow – and take a look at why the bitcoin price only seems to go up during Asian trading hours…