SODERMALM, STOCKHOLM – Of all the gold coins I’ve got, this one’s my favourite: 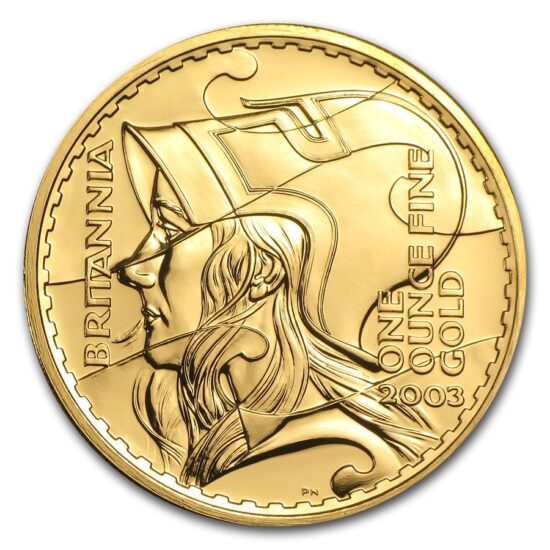 Of all the designs the Royal Mint has stamped on gold and silver Britannias, it’s yet to surpass this one from 2003 in my view. That year, it just cracked the aesthetic perfectly: the elegant profile, the wave overlay, the font, everything. It complements the metal in a way that makes the coin feel less like a piece of bullion, and more like an item of treasure, to be coveted.

And I can’t be the only who thinks that, for 2003 Britannias are hard to find, and they come at a fat premium.

Wild to think you could have bought one of those for less than £250 when they were released – you’d be looking at the fat end of £1,700 now, and that’s if you can find one. 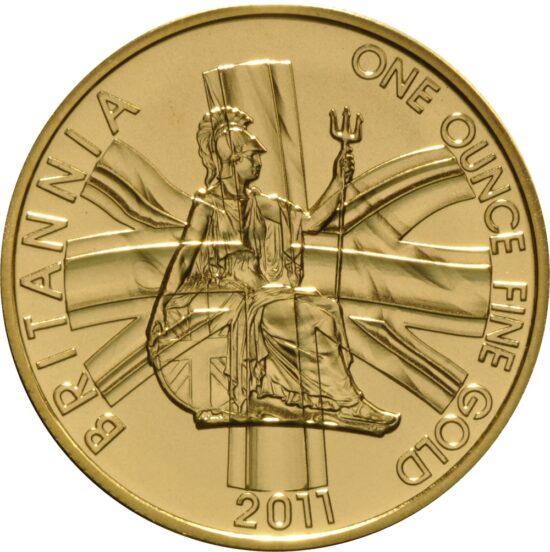 But rather than bore you with a diatribe on bullion, I’ve something else for you today.

I bought one of those 2003 Britannias a couple of years back, and justified the grand premium I paid above the gold price for it because I’d recently made a bundle off bitcoin.

That fine design on its face was brought to mind earlier this week, when my colleague Charlie Morris (editor over at The Fleet Street Letter Wealth Builder) wrote a piece on valuing bitcoin in gold, and how the BTC/gold ratio is key to knowing when the bitcoin price has reached an extreme.

I’d like to share some of that piece with you today before I leave you for the weekend. Do bear in mind that Charlie wrote this a few days ago, before bitcoin reminded everybody of its volatile nature and snapped back from $19.5k to $16.7k, where it was at ten days ago.

As of this moment, one BTC will buy you 9.5 troy ounces of gold, though when Charlie wrote this, it was pushing 11. With that clarified, I’ll leave you for the weekend and let Charlie explain to you why you should value bitcoin not in pounds or dollars, but by weight…

All-time highs are measured in ounces

For bitcoin, making a new all-time high in Turkish lira or Argentinian pesos came easily. A new high in dollars is underway, but it is boring as people deliberate whether it came at $19,602.80 or intraday at $20,001.20 on some far-away exchange. Quite obviously, bitcoin has reached its all-time high in dollar terms, and in much ruder health than at the 2017 peak.

Last time, the price was 350% above its 200-day moving average. This time it sits at a more sustainable 90%. The bitcoin ecosystem has vastly improved, as the 2017 high attracted the grownups. They have been hard at work preparing bitcoin for institutional investment, just as they did for the gold market 20 years ago.

On that note, bitcoin is still four ounces short of its all-time high when measured in ounces of gold. A bitcoin currently buys you nearly 11 ounces of the yellow metal. The old high in 2017 bought you 15, but you had to be quick. Bitcoin’s last major hurdle before it reaches true fresh air will be a new high measured in gold. At least for the Austrian School.

A bitcoin buys you 11 ounces of gold

Source: Bloomberg
Bitcoin in ounces of gold since 2016

The price of bitcoin is rising for all the reasons we have been highlighting in recent months. Investors have tended to agree, which is evident in the flows.

In this excellent chart from James Butterfill over at CoinShares, he has aggregated the global fund flows for gold and bitcoin exchange-traded products and other funds. They were somewhat correlated until the late summer, then boom. Money leaves gold as investors flock to bitcoin. We cannot be sure that gold funds necessarily went into bitcoin funds, but there must surely have been an element of that. 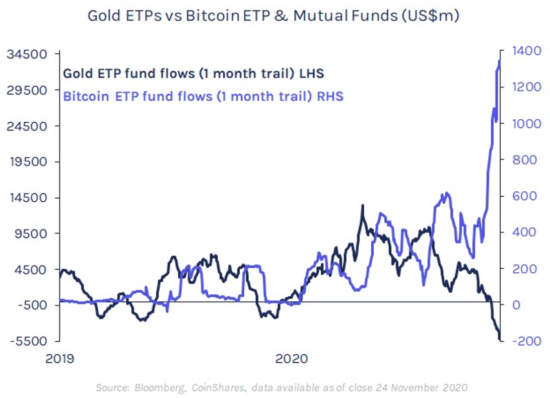 It is funny how 90% of the investment world seemingly ignore both gold and bitcoin. They appeal to like-minded people, who seek protection from debasement.

Most people believe in the system, for if they didn’t, it would already have failed. But gold and bitcoin folk have become tribal, just like you see in sport or religion. Rather than respect one another’s views, and collaborate in winning over the 90%, they throw sticks at each other.

Unlike in late 2018, bitcoin is the current flavour of the month while gold is seen as irrelevant. No doubt that will reverse at some point.

There was a strong pushback from the Austrian economist and author, Emil Sandstedt. (Hat tip to Adam Cleary for highlighting). He wrote how the gold and bitcoin proponents are both wearing blinders to each other’s arguments.

In favour of gold, he said it was immune from “double spend”, and it does not leave traces. When multiple actors want to move bitcoin, the network can become congested, and fees can spike, whereas gold can be transported independently without impacting other market participants.

Finally, there is only one gold, whereas bitcoin can be forked. In the future, forks might not necessarily be opportunistic, such as BCH, but to correct bugs or attacks. Read the thread for yourself.

I like counter arguments, especially when the consensus becomes so strong. With bitcoin back in the spotlight, it is a time to reflect. Having banged the drum on these pages since April that bitcoin was poised to rocket, it is now happening.

You can punch the air and think you’re clever, or you can prepare for the next battle. That is the eternal humbling force in financial markets. As soon as you are proved right, your views soon become irrelevant. You have to keep on being right.

To remind you, I have studied gold since 1999, and bitcoin since 2013 (having dismissed it in 2011, which was the most expensive mistake in my life). I like both assets, for different reasons, and believe they will both perform very well in a debasement or inflation scenario.

It goes without saying, as I have argued in recent weeks, that bitcoin has the potential to do much better, but not without risk. But despite the recent performance, gold will still do very well indeed, but with less risk.

Michael Saylor, bitcoin’s man of the moment, compares gold to a horse, buggy and stagecoach; the implication being that humanity moves forward and embraces new and better solutions. That is a Silicon Valley view of the world, that everything must be automated and connected.

It has been a very bad idea to bet against the computer since its creation. It has led to a giant leap forward and improved our lives. But do you really believe that the computer will dominate everything? I do not. It will achieve everything it possibly can, which is not everything. What’s left of the old economy will happily coexist.

For example, UK internet retail sales (e-commerce) make up 28% of all UK retail sales, when back in 2007, it was less than 3%. As it has grown, it has destroyed the traditional retailers who failed to adapt.

2020 is an unusual year. Before the lockdown, e-commerce had a 20% market share, which boomed during the first lockdown to 32%. To put things into perspective, the last 10% gain in share took months in contrast to the previous 10% gain, which took a decade. No doubt a similar experience has been witnessed in other countries. 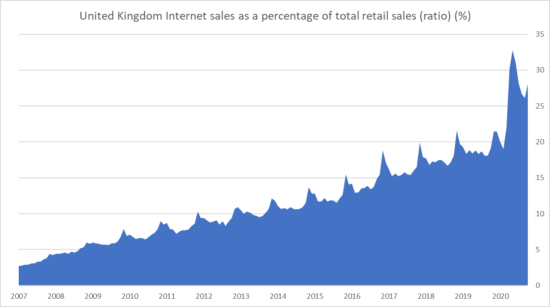 Source: Office for National Statistics
As titled since 2007

E-commerce has been a megatrend and will continue to gain share, but hopefully lockdowns become a distant memory, and we’ll flock back to the shops. With many shops closed for good, 2021 will likely see relief for whatever is left.

Within a few years, e-commerce will make another new high, even in the absence of lockdowns. But at some point, e-commerce will plateau. It will never kill off traditional retail as the old world will find a balance with the new.

For the future of gold and bitcoin, I see a similar development that we have seen in retail. With the likes of PayPal betting big on bitcoin, digital assets will soon become more relevant to the everyday consumer.

With money being printed on a gargantuan scale, there is room for two debasement hedges in the world. Gold will continue to grow as a store of value, even while bitcoin gains share.

The journey will be bumpy, and whenever the markets come under pressure, as they periodically do, money will flow back to gold. Like we see in retail, gold and bitcoin will find a balance.

Gold and Bitcoin are ideally placed to work together, almost like bonds and equities (used to) do in a 60/40 balanced portfolio. Some of the old gold bugs think bitcoin is ridiculous, just as the bitcoin maximalists see gold as a barbarous relic.

As with extremist views in general, they are blind. In the meantime, it is bitcoin’s time. Let the bull run commence, and never write off gold…