But we’ll come back to that in a second.

The Black Operation making a mint in lockdown

“THE NUMBERS, MASON. WHAT DO THEY MEAN?”

It’s one of the opening lines to a video game released just over a decade ago, which has since become iconic, and something of an internet meme.

Call of Duty: Black Ops was released back in 2010. The game is set during the Cold War and has an action-flic plot, revolving around a Soviet plan to unleash a chemical weapon developed by the Nazis called Nova 6 on the US. You play as a soldier from Alaska called Alex Mason, who is a member of a CIA assassination unit called Operation 40.

While dated by the standards of today (video game production quality continues to accelerate by leaps and bounds), the game is a lot of fun.

You get to assassinate Fidel Castro during the Bay of Pigs invasion (sadly revealed to be a body double soon after), escape from a Soviet gulag on a motorbike, shoot down a Soyuz rocket as it’s being launched, play Russian roulette at gunpoint in Vietnam (in a blatant rip-off of the 1979 film The Deer Hunter) and receive assassination orders from JFK in person to assassinate a Soviet general.

But the game begins with a woman in a recording studio, cigarette in hand, speaking a series of numbers into a microphone. You then see the world from the first-person perspective of Mason, who is strapped to a chair and being violently interrogated by men who want to know what the numbers mean.

As you progress through the game, it becomes clear that Mason’s mind has been compromised. As you play as his character going about his Cold War rampage, you begin hearing and seeing red numbers all over the place, without him being able to explain what they mean, or why they’re there. (I expect bullish investors experienced something similar when Lehman Brothers went bust in 2008.)

It’s only once you reach the finale of the game that Mason discovers he was the subject of a Soviet mind control programme while captive in a gulag, and the numbers are coded orders from Moscow to conduct Soviet black operations on US soil.

And as the credits roll – spoiler alert – it’s revealed that you/Mason shot JFK. It was a good game. You can always rely on Activision to deliver digital entertainment to the masses. And like they say in baseball, the scoreboard doesn’t lie: Black Ops would break several world records, notably earning over a billion dollars in revenue for Activision Blizzard ($ATVI) in the six weeks following its release.

I suspect plenty of millennials regret not buying shares in Activision after enjoying their games. If you’d picked up some $ATVI stock when Black Ops had been released in late 2010, you’d be sitting damn pretty right now.

You’ve likely seen ads for the direct sequel to Black Ops which was released last month, called Cold War and set in the 80s, with several of the original characters returning. Lockdowns have been an explosive accelerant for an industry that was already booming, and now the share is now at an all-time high: 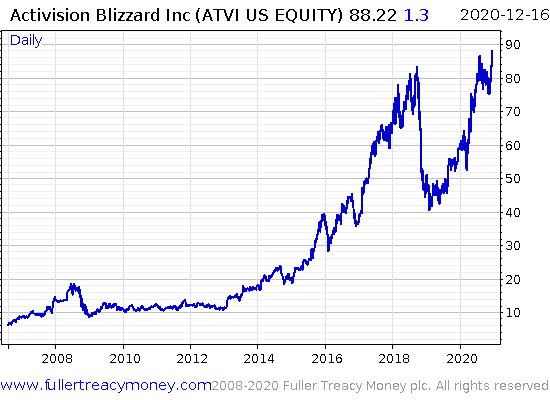 There’s a popular refrain now that social media is doing to boomers what they said violent video games would to millennials (radicalise, desensitise, etc). Amusing, and there’s certainly some truth in that – but I’m going a bit off-topic. Let’s get back to “the numbers”…

I could almost hear the disembodied female voice repeating the number sequences throughout Black Ops yesterday when I found my phone swamped with messages that contained only numbers. Cryptic texts and tweets stated simply “20”, “20,100”, “20,800” then “21”, and now today “22” and “23”. I hope these aren’t coded orders from the commies telling my subconscious I need to go assassinate somebody – that might violate the social distancing rules.

Thankfully, I believe these numbers relate to bitcoin’s incredible surge this week – finally breaking through the all-time highs of 2017 into fresh pastures above $20k.

I’ve mentioned in previous issues of this letter that I’d only be comfortable saying BTC was at an all-time high once the price was above $20k, as there are so many crypto exchanges out there that declaring a new high when the price was in the $19,000s range seemed half-baked. But we’re certainly there now – no two ways about it.

At the beginning of February (remember then? Those were the days…) I said that bitcoin would double this year in an issue of The Fleet Street Letter Monthly Alert (you can read a free version here). The price was just under $10k back then, so this surge comes right on time for Christmas. Happy days. The question is, what now?

Last Sunday at noon over a billion dollars of bitcoin was transferred across the blockchain in a short space of time, likely between just two entities.

Bitcoin transactions across the blockchain (valued in dollars) illustrated in bars along the bottom, with the price in green over the top
Source: ByteTree

I wonder what happened here – and if it relates at all to the price action this week. But “whales” – those major investors of BTC who bought in years ago, and who may have been behind this transaction – surface to speak publicly only rarely, and most of the time keep mute. Expect their behavior to draw much more scrutiny in the future.

As the BTC price reaches new highs, the mysterious lords of these sunlit uplands will attract significant public attention. You won’t be just hearing from me about major transactions, you’ll start seeing newspapers start to report on them.

Buying and holding Activision stock when gamers were first asked what “the numbers” meant back in 2010 would have been a great investment.

But in truth, it wouldn’t have held a candle to repeating the question, and asking what the numbers mean on a certain document published online by an individual calling themselves Satoshi Nakamoto… when the price of 1 bitcoin was just ten cents.

PS Key to bitcoin’s value is its promise of sovereignty to those who own it. Hold some bitcoin in a hardware or paper wallet, and it is yours alone – not held in a bank or brokerage account.

It’s this promise of sovereignty which I believe has piqued the interest of Southbank Investment Research’s newest, and most controversial editor… who wants you to take back control of your wealth.