Why Biden’s a heavy favourite this November

Why Biden’s a heavy favourite this November

Not only am I honoured to do so, but I also can’t think of a better week to make the case for my own thesis on the US election to Conflict & Capital readers.

Boaz asked you in last week’s poll which way you believe the election is heading.

More than 70% of you predicted a Trump victory. And I can certainly see why.

He shrugs off scandals that would ruin other politicians. Every bombshell his opponents and the media drop on him seems to bounce off harmlessly.

He’s a billionaire heading a lavishly funded political machine – and as if that weren’t enough, he seems to have an unshakeable hold on the loyalties of 40% of Americans.

Even so, I believe Trump is headed for a historic defeat in 57 days – a landslide loss on par with Jimmy Carter’s to Ronald Reagan, or even Herbert Hoover’s Great Depression blowout to FDR.

Some of this has to do with the fallout from coronavirus – which has hobbled the economy that was going to be central to his reelection argument.

However, that’s not the real reason.

Why Biden could cruise this November

Since both parties’ nominating conventions wrapped up last month, pundits have wondered if the Republican convention could give Trump a polling bounce after millions of Americans tuned in to hear him make the case for a second term.

But post-convention polls show Biden leading from anywhere from 7 to 10 points.

State polls show little more mercy, either, with a FOX News poll showing Biden with a forceful 9-point lead in Arizona – which, with its 11 electoral votes, is an important piece of the Electoral College puzzle.

However, while Arizona is a “great to have” state, Florida with its 29 electoral votes is a “must have” state for Trump. And the president hasn’t led polls there since April.

Winning Florida would be a knockout blow for Biden, but the bad news for Trump doesn’t stop there. He trails by 8 points in Wisconsin, a Midwestern state he won in 2016.

He even trails by 4 points in the southern state of North Carolina. North Carolina is a GOP-leaning state that only votes Democratic in national landslides – think of the Tories winning former “red wall” seats in places like Northumberland last December, and you’ll understand what losing North Carolina is like for Trump.

Add up the states where Biden has a significant polling lead (at least +5% over Trump), and this is the electoral map you get: 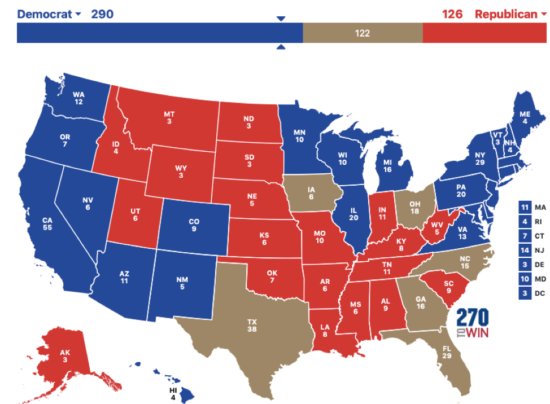 Notice the grey-coloured states – Biden leads in most of them, but within the polling margin of error. If he carries them, he’s winning in a landslide. But even if he loses all six battlegrounds, he still has a comfortable Electoral College win.

By now I suspect you’re asking – who cares what the polls say? Weren’t they wrong in 2016?

The secret story of 2016 – polls were actually good

Actually, no. Hillary Clinton led the average in public polling by 3% on the eve of the election, and went on to win by 2.3% in actual results.

That’s not a big polling miss – but it did allow for the Electoral College “misfire” that elected Trump president despite receiving almost three million fewer votes than Clinton.

It’s the same wrinkle that allowed George Bush to prevail over Al Gore despite receiving half a million fewer votes nationally in 2000.

But this time around, I don’t think Trump can count on it to save him…

The electoral anomaly that has saved Trump – so far

The Electoral College is a system which assigns the 50 US states a number of electoral votes based on their representation in Congress. The most populous states, like California, have the most electoral votes, and 270 electoral votes from various states are needed to become president.

But here’s the rub – all of a state’s electoral votes go to the statewide winner, whether that winner prevails by one vote or ten million.

In California for example, Clinton beat Trump by 4.3 million votes. That’s a historic margin – no candidate has ever won a state by so many votes in US history.

Yet she got 55 electoral votes from the blowout – exactly the same as Barack Obama had four years earlier, though he took California by a more modest 3 million votes.

Compare that to what happened in the three states of Wisconsin, Michigan and Florida. Trump won the trio by a combined 155,000 votes. He took all of their 59 electoral votes with that 155,000 vote margin, while Clinton “wasted” 4.3 million votes in California.

In state after state, Trump’s voters are positioned very efficiently throughout the Electoral College. He only needed tiny margins to score big electoral vote hauls – and he generally got them, while millions of Democratic voters are stowed away in safe landslide states. This dynamic enables Trump to win the presidency despite receiving millions fewer votes than his opponent.

But the Electoral College “misfire” can only take him so far. At some point, a Democratic wave gets big enough to win over the more marginal states like Wisconsin, Florida and Pennsylvania. It’s easy to see Trump hanging on to those states when Biden is winning nationally by 2%. It’s almost impossible to see him winning them if Biden is winning by 7% or more nationally.

As it happens, Trump is trailing Biden in the polls by an average of 7.4% today. That’s well outside the range of an Electoral College “misfire” result.

To put it simply: the Electoral College offers Trump a lifeline. But it’s a short lifeline – long enough to overcome a 2% deficit in the popular vote, but not a 5% or a 7% one, much less the 7.4% polling lead Biden enjoys today.

The biggest Democratic landslide of our lifetimes?

What’s amazing about Biden’s lead is it’s the biggest any Democratic candidate has seen in my lifetime – or since 1964, when Lyndon Baines Johnson (LBJ) won 45 states out of 50 against Republican Barry Goldwater.

And in 2008, with George W. Bush less popular than Nickelback’s music, Obama won the popular vote by 7.2%. It was a relative landslide that didn’t just bring Obama to power. The wave election also elected dozens of Democratic lawmakers on the strength of Obama’s coattails – candidates who wouldn’t normally get elected in their states, if it weren’t for a rising tide of support for their nominee that lifted all party members’ boats.

These senators and congressmen, in turn, would bring about some of the most significant and progressive legislation in history, most famously being Obamacare.

It’s time to start asking – if Biden’s lead really is bigger than Obama’s, what kind of Congress will be elected with him?

The question isn’t whether it’s progressive – the question is just how progressive the US’s next congressional majority is, as Republicans around the country pay the price for voters’ anger at Trump. Biden wouldn’t just be winning by a historic margin. He would also preside over the most progressive Congress in US history, too.

What will this kind of result mean for markets?

The first thing to consider will be Biden’s clean energy plan. He’s pledged $2 trillion in green energy infrastructure in his first years in office – and Congress may actually send him a plan that’s even bolder.

And if he trips on a banana peel between now and November? What if Biden blows a historic lead in the four months before Election Day?

It’s always possible. A lot can happen in the 57 days before the US votes. Trump could still win.

But based on the numbers, I highly doubt it.

PS Interestingly, Biden paid no political price for promising to reinstate a national lockdown if the experts recommend that course of action to him. But all around the world, we see politicians holding the threat of renewed lockdowns over their citizenry – and being rewarded for it. As Covid-19 cases climb in Britain, Nickolai Hubble has done extensive research on what a second lockdown will mean for your lifestyle and money – and the No. 1 investment for the times that’s neither gold, silver, crypto, stocks or bonds, yet could preserve the bulk of your wealth in the next few months. Details here.