They only lasted two months

They only lasted two months

Boaz Shoshan is putting the finishing touches on this month’s Zero Hour Alert this morning. So I’m back in the hot seat at Capital & Conflict.

But you know what, this morning I really don’t need to give you much of an explanation for what’s going on. The news speaks for itself.

Yesterday, the EU’s trade commissioner Cecilia Malmstrom went on Bloomberg to threaten the UK with tariffs “on day 1” of Brexit.

There’s nothing like a hypocrite getting their just desserts within hours. The World Trade Organisation (WTO), of all people, obliged by ruling against the EU in a trade dispute over its support to Airbus. The Financial Times explains the ruling:

The WTO’s appeals body on Tuesday upheld a 2016 ruling that the EU has failed to eliminate billions in illegal aid to Airbus on two aircraft — the A380 superjumbo and the A350 twin aisle jet.

So, not only did it breach trade practices, but it failed to stop doing it.

That ruling is the culmination of a 14-year legal battle between the EU and the US. Between Boeing and Airbus. But here’s the funny part. The WTO ruling allows the US to apply punitive sanctions on the EU for its bad trade practices. Billions of dollars in punitive sanctions.

Heaping on the pain, Airbus has announced it isn’t planning on repaying the huge government loans it got to develop the A380 superjumbo. The company has stopped making them and never sold enough to cover costs or repay EU governments.

Adding on insult to injury, Boeing abandoned its partnership with Airbus to develop the plane for precisely the reasons it failed. So all this was predictable.

Bloomberg has the headline “Frankenstein Capitalism Is Stalking Europe” to highlight how similar practices are causing problems across industries in Europe.

Now the EU’s dodgy anti-trade practices were well known already. They’re one of the reasons to leave the EU. And the tough talk from the commissioner aimed at Britain only highlights how the EU treats the nations that Britain wants to trade with. Without all those tariffs the EU is threatening us with.

But this trade debacle is just a few dotpoints on the trendline to European misery.

After years of “holier than thou” finger pointing from the EU on money laundering, it turns out the EU’s own banks are the big fish in the game. One after the other a series of EU banks were uncovered to be major money laundering operations this week. The story managed to stay on top of the Bloomberg homepage for three days – a record that surpasses even Brexit news by my reckoning. European bank stocks caught up in the scandal got hammered.

Then, yesterday, the European Central Bank (ECB) decided it was time to step back in to the economy and meddle some more. It’s barely been two months since they stopped quantitative easing (QE)… and only a month since Bloomberg’s headline “Draghi Doesn’t See Need for More Stimulus to Combat Growth Woes”.

Now the ECB president says he got a unanimous decision from the ECB governing council to pump more money into Europe’s banking sector.

The ECB’s stimulus is getting less and less powerful. It takes more and more money for the same effect each time. Look out, we’re heading for an overdose eventually.

Perhaps the concern for stocks was about the lower GDP growth the ECB now expects for Europe. The forecast was cut by a third. And that puts the budget drama with Italy back on the table, because the December deal between the Italians and the EU presumed high growth rates.

Remember, the budget drama with the Italians caused market plunges in May and October as predicted in Zero Hour Alert issues. Only this time, Emmanuel Macron’s France is in breach of the rules too. The next budget clash is weeks away.

Boaz Shoshan has been steadily warning you about Europe’s coming recession here in Capital & Conflict. But here, we lay out far deeper problems tearing apart the eurozone.

The underlying problem isn’t the economic slowdown itself. It’s the divergence within the eurozone. German wages are soaring at a 5% per year rate. House prices even faster. Despite German GDP growing at 0%. That’s what you get when the ECB has rates at 0%. Stagflation, of a sort.

In southern Europe, Italy is in recession. But the ECB can’t bend its rules much more to help just half the eurozone. And the money just flows north anyway.

In October last year I predicted the volatility caused by the ECB’s withdrawal of QE. Here’s what I wrote in Southbank Investment Daily:

Can you think of a name for it? If quantitative easing causes the wealth effect, what does quantitative tightening cause? The impoverishing effect?

It took Boaz Shoshan less than a minute to find a better answer. Here’s what he sent over: 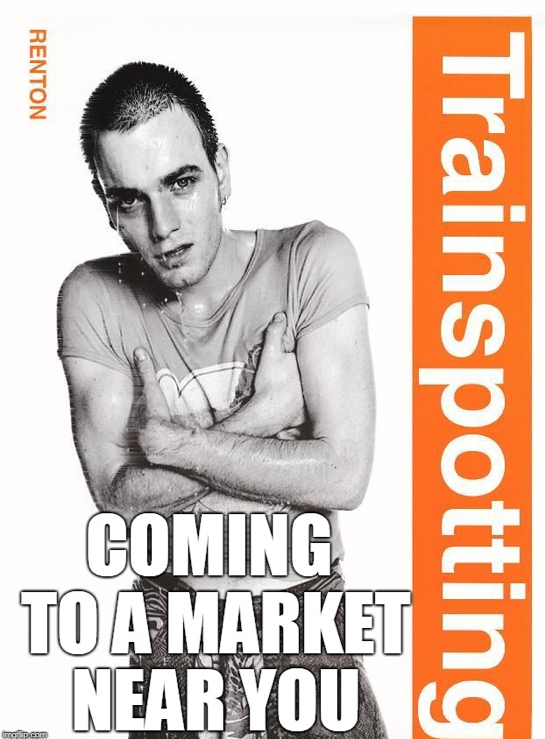 QT gives us the Trainspotting Effect. The end of an artificially induced high. That means withdrawal symptoms, mood swings and bizarre chase scenes. The ending features someone else running off with your money.

And that’s precisely what’s happened in the end of 2018 – when the ECB withdrew QE. In 2019 the economy turned down too. It’s been so bad that, just like in the movie, the drug addicts relapse. They need their monetary hit, or all hell breaks loose in markets.

Where does it end?

While Europe stumbles, Britain is booming. Again, let’s go with the news instead of analysis

The chancellor’s budget is blowing out in the opposite direction to southern Europe’s. “UK public finances set for windfall in spring statement” reports the FT.

The Telegraph reports European investment in the UK has doubled since the Brexit referendum. Not the rate of investment, the total amount. That’s more than 100% growth in just two years!

Don’t get to excited though. It’s not because Britain is especially promising. It’s the lack of alternatives. “A lot of Europe has been at or near recession. There haven’t been as good opportunities to invest in Europe as there have been in the UK, which has been performing well,” Nick George at PwC told the Telegraph.

The Wall Street Journal reports the Brexit banker exodus simply hasn’t happened. And migration rates are stable as the UK rebalances from a racist system which favours Europeans to a system that treats people equally, regardless of their race.

Add to all this the usual stats. Unemployment at lowest since the 1970s. Employment highest. Wage growth at a ten year high, despite inflation at low levels. Productivity growth is trending up according to the Bank of England this morning.

Adding insult to prosperity for project fear, even UK house prices are on a tear. Up almost 6% in a month – an “unprecedented jump” according to Bloomberg.

So far, the only Brexit disaster is the £33 million which the Government must pay Eurotunnel to avoid legal action. In fact, if you take out political news, Brexit has been an unmitigated success. Better than anything a Brexiteer dreamed of. So much for “pain in the short term, but it’ll be worth it”.

It’s a shame we can’t have another two years of uncertainty. Another two years where the politicians are so busy with Brexit, they don’t manage to interfere in our lives in all the usual ways.

Keep in mind that while Westminster is busy with Brexit, it isn’t wreaking havoc on the rest of our economy. And that’s the real reason we’re doing well.