Election Day will officially be held on Tuesday 3rd November in America.

But actually, every day is Election Day from now until then.

Early voting has already kicked off in several key “battleground” states – contests that will deal a knockout blow for one candidate in the Electoral College math.

It’s striking because the early votes coming in are the first concrete signs of what’s to come.

These actual results are real in a way polling simply isn’t – and they offer major clues on what’s to come.

Democrats dominating in the early vote so far

I was surprised when I saw a poll result from CNN News showing that 53% of Biden’s supporters rated themselves “very enthusiastic” about voting, compared to 46% of Trump’s backers.

After all, conventional wisdom holds that Biden’s backers are lining up behind the guy they see as “good enough” while Trump’s voters see him as an almost messianic figure.

But the result has held in other polls, too. I’ve seen the best theory for why coming from the vaunted statistician, Nate Silver.

“Many of Biden’s backers aren’t as enthusiastic about Biden as Trump voters are about Trump,” Silver wrote.

“But Biden’s voters are extremely enthusiastic about beating Donald Trump. And that could amount to the same thing.”

Now, over the last week of early voting in the key battleground state of North Carolina, we’ve seen a surge in Democratic early voting that seems to validate this idea.

In North Carolina, Democrats have a three-to-one advantage over Republicans in absentee ballot requests so far.

This is the state Obama barely won by just over 14,000 votes while he was winning 2008’s election in a landslide nationally. But it’s narrowly voted Republican in the two elections since.

I’ve compared it to Labour’s former “red wall” county of Northumberland, an ancestrally Labour county that showed the Tories were having a big night in 2019 when they captured it.

When George Bush prevailed there in 2000 by 537 votes out of 4.5 million cast, it gave him the Presidency. And polls show this state could go either way November 3.

The critical state is, of course, Florida.

Florida is home to more than 18 million Americans, and its politics is about as evenly divided as it is possible to be.

But today, Democrats seem to have the edge in Florida. Their voters have requested more over 700,000 more ballots than Republican voters have since early voting began almost two weeks ago.

In 2012, Democrats also dominated early voting in Florida, leading one analyst to warn Republicans the Obama machine was “cleaning our clocks.” It was the first major sign Obama would go on to win Florida.

But what’s really alarming for the GOP is the fact that hundreds of thousands of Democrats who didn’t vote in 2016 are requesting ballots now.

In 2016, lack of enthusiasm for Hillary Clinton, and complacent thinking that Trump could never win, caused tens of thousands of Democrats in battleground states to stay home. That’s clearly not happening now.

In Pennsylvania (another important battleground, with 20 Electoral Votes) Democrats have requested 176,000 more absentee ballots than their Republican counterparts.

These figures are preliminary. Someone who’s registered as a Democrat won’t necessarily vote Democrat, and even some people now requesting ballots won’t end up voting after all.

And there’s always a chance Donald Trump’s supporters, while seeming to hibernate in early voting, turn out on Election Day to dominate.

These numbers don’t mean the election is slipping hopelessly from Trump’s grasp;

But what they do signal is that the polls so many people are dismissing after 2016 just might be real this time.

And as Chris Wilson, a GOP pollster and master of data and analytics says, “A ballot in is a ballot in, and no late campaign message or event takes it out of the count.”

The more early votes Biden can lock in over the next few weeks, the less room Trump has to maneuver – and the less any late-breaking event in Trump’s favour will matter.

And Florida counts its votes exceptionally fast, thanks to state law enabling counting of ballots received long before Election Day.

To see how important Florida is to Electoral College math, check out this map of what happens if Biden loses Pennsylvania, North Carolina, Ohio, and even the long-time Democratic strongholds of Wisconsin and Michigan, while carrying Florida: 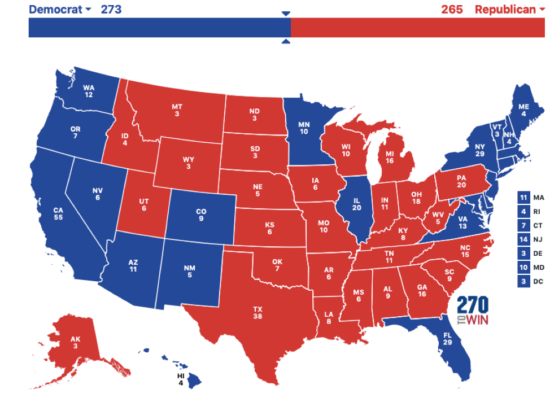 As you can see, he prevails in the Electoral College with three votes to spare.

To put it simply – almost everything can go wrong for Biden so long as he wins Florida.

This is why strategists and pollsters in both parties are watching Florida with keen interest. Biden has a slim but precious lead in polls there. And the 700,000 Democratic ballot edge is scary to Republicans.

If Biden wins Florida by a clear enough margin for networks to announce it shortly after Florida polls close at 7PM EST, Donald Trump’s reelection hopes will be effectively over.

And British election watchers can go to bed just after midnight their time, knowing who the President of the United States will be.

PS While the coronavirus drags down Trump’s ratings and hampers his re-election, Boris Johnson has to secretly feel thankful he has more than three years left before facing voters. This insulation is making a second lockdown far more likely – as is the exponential rise in COVID infections in Britain over the last few days. My colleague Nickolai Hubble has written extensively about what investors can expect to happen to their money as a second lockdown looms – to see details on his top investment to make in preparation, click here.