ABERDEEN, SCOTLAND – “If your travel today involves the Suez Canal, there will be a slight detour around Africa…” 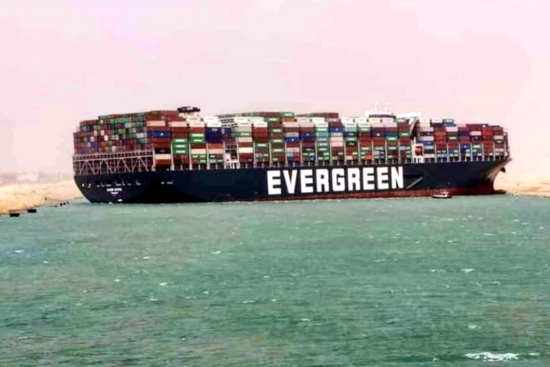 Talk about a spot of bad parking. As of this morning, the 200,000 tonne Ever Given (which some believe will soon be renamed the Never Given Way) of the Evergreen shipping line remains stuck, smack bang in the middle of the Suez Canal.

Laden with Chinese goods en route to the Netherlands, the beached metal whale some 400 metres long is blocking one of the most important trading routes in the world. The Suez Canal accommodates 10% of all global maritime trade – traffic jams here have big consequences. There’ll be fines aplenty handed out once this behemoth is unwedged, but by that point the distortions in trade will already be in full effect.

While trouble in Suez summons images of Anthony Eden’s 1956 invasion and the last gasp of the British Empire, chaos in the canal today has uniquely modern consequences. Globalisation, especially post Cold War – led to the grand optimisation of international supply chains.

Massive container vessels like the Ever Given are designed to carry as much freight as possible and to move it at a snail’s pace for maximum fuel economy. No thought has been given to manoeuvrability or speed – for neither is required when the high seas are at peace and the US Navy is promising to keep it that way.

Maximum movement of goods for the cheapest cost has been the name of the game – and Western consumers have feasted on the likes of cheap electronics, clothing, and cars without ever realising how fragile the system which provides them can be.

When considering the extent to which these global forces affect our lives and shape the world, an anecdote comes to mind. My hometown of Aberdeen is called “The Silver City” by drunk or otherwise excessively optimistic individuals because all the buildings are made of silver granite over here. This area of Scotland is blessed with significant granite deposits, and many millions of tonnes of it have been quarried here over the centuries to build and expand the city. On the one day a year that we get sunshine, the granite buildings glitter like silver, earning it the nickname (the rest of the year it just looks grey, but we won’t dwell on that).

A few years back I was told of a successful Aberdonian businessman having a home custom built for him. It was to be made of granite of course… but not locally sourced. No, this granite was not from Aberdeen or even the UK, but from China. It was actually cheaper to have tonnes of the stone shipped all the way over from the other side of the world in South-East Asia, than to just use local granite. That’s the power of globalisation.

(It’s also the power of devaluing your currency to make your goods and services more competitive – cue China’s manipulation of its renminbi, but that’s a subject for another time.)

To be honest, I’m surprised that the WuFlu crisis which has thrown the web of global commerce into disarray hasn’t caused more obvious disruptions for the everyman. While of course there were massive supply shortages in the likes of PPE equipment over the past 12 months, that was on the back of a sudden global demand surge for PPE, rather than the physical shipping lanes being disrupted and leading to a shortage.

The only product in the public eye I can think of that has been disrupted in this way is Sony’s PlayStation 5. Launched in November last year, port congestion in Asia caused by Covid-19 caused a massive supply squeeze for the item, which was hotly anticipated (video game consumption has boomed under lockdown). So much demand chasing a trickle of  supply much lower than Sony intended to bring to market, has led to second hand selling of the console at usurious rates. A friend of mine who managed to get his hands on one is afraid to throw the box away, for fear that somebody will see it in his trash and burgle his house for it.

This is a “First World Problem” if ever there was one of course – such a minor inconvenience does not even register as an actual issue. What I fear however, is that this is a foreshadowing of much darker supply chain disruptions to come, where critical imports such as fuel and food become contested, leading to civil unrest in the nations that took such blessings of abundance for granted. The traffic jam building behind the Ever Given hints at this fragility. All it takes is one man to pull hard to starboard…

If you know of other finished products that have become scarce as a result of supply chain disruptions abroad over the last year (and not due to a sudden spike in demand, like loo roll, masks, and hand sanitiser) do let me know: [email protected]. I’m sure there are others out there that slipped my eye. The continuing shortage of semiconductors out of Asia is certainly catching the attention of my colleagues…