An Oasis in a Desolate Wilderness…

An Oasis in a Desolate Wilderness…

GUALFIN, ARGENTINA – Stocks ended last week on a low note, after a jobs report showed the smallest gains since 2017.

Larry Kudlow – the president’s director of the National Economic Council – was on TV almost immediately explaining how the low numbers were just a fluke and that the economy was better than ever.

Kudlow could be right; the monthly statistics are all just background noise. But after a few months, you can begin to pick out a tune. The individual stats are nonsense, but the combination, like the notes of a song, often reveals a recognizable pattern.

And what we hear is a familiar tune. Jobs, real incomes, and GDP growth rates are all punky… all typical of the late stages of recovery… neither better nor worse than those of Mr. Obama… and getting punkier.

Meanwhile, the grand climax of the Obama/Trump recovery must be approaching. The whole orchestra is sawing, puffing, and strumming away. And the cymbal player is on his feet, ready for the final smash.

Advance numbers on this Q1 of 2019, for example, are coming in very weak, with the Atlanta Fed estimating a growth rate of less than 0.5%.

Again, a single quarter’s results don’t mean much. We’ll wait to hear the major chords. Our guess is that the last quarter’s GDP growth numbers are likely to be revised downward too… and that a downward, dying finale will then be unmistakable.

No economic recovery ever exceeded 119 months. This one is already at month 116. The audience is getting restless. It’s time to wrap it up.

(Long-term Diary sufferers have learned that our timing isn’t perfect; we tend to rush things a bit.)

Meanwhile, Donald Trump produced his budget proposal yesterday. As expected, it includes a big increase for the military; more money than even the bamboozlers at the Pentagon know what to do with. The New York Times:

President Trump sent Congress on Monday a record $4.75 trillion budget request that proposes an increase in military spending and sharp cuts to domestic programs like education and environmental protection for the 2020 fiscal year.

Mr. Trump’s budget, the largest in federal history, includes a nearly 5 percent increase in military spending – which is more than the Pentagon had asked for – and an additional $8.6 billion for construction of a border wall with Mexico.

So, what do you think, Dear Reader? What is the biggest threat that the U.S. faces? Terrorists? Russia? China? Or, its own lack of financial self-control?

We went off to a neighboring ranch last week just to see how it was managed. It is about 50 miles to the northeast, as the crow flies. But the crows are lucky.

Driving takes six hours, down our own valley, then down another, up another, and over a pre-Andean mountain range to finally arrive in an “oasis” in what is otherwise a desolate wilderness. It is a different world… a vast, secluded valley with thousands of acres of rich farm and grazing land.

“The cattle are so fat,” we said to an Englishman staying there.

He was a cattleman himself, with a spread in Exmoor.

“You think they’re fat? They don’t have any meat on their rumps. You wouldn’t get much for them in England.”

We were looking at crossbred cows, mixtures of Brown Swiss and Herefords. They looked good to us, largely because our only point of reference are the thin cattle on our own ranch, where they have little to eat and have to walk miles to find it.

“We produce sand-fed beef,” we explained. “They eat the grass down so short that they pick up a lot of sand. Wears down their teeth. But the beef is very lean. Low fat. Low cholesterol. Gluten free.”

“Heh heh… do you sell them for food? Or for pets?”

Pampa Grande is a stunning place. It is its own world, with its own climate, its own economy… and a grandeur that is hard to match. 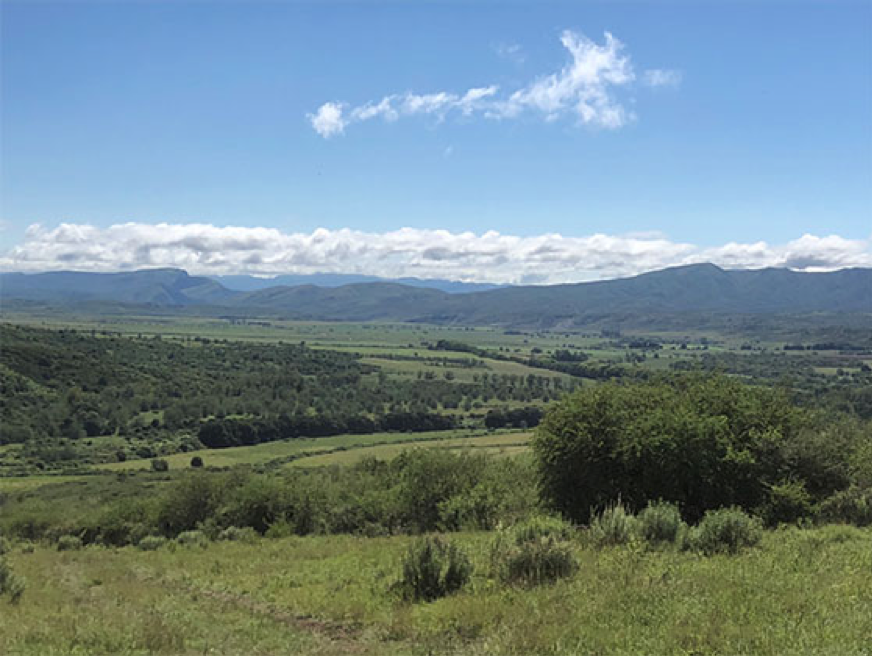 On the trail at Pampa Grande

It was once home to the Guachipas Indians, who built their houses with cut stone, much like the Inca. Then, when the Guachipas were conquered by the Spanish, the stones were recycled into houses and farm buildings.

The main difference between Pampa Grande and our place is water. It has water. We don’t. Clouds seem to get stuck in the valley and drop their moisture.

“Around here,” explained a local gaucho, “water is gold.”

The ranch is open to paying guests. Since we will have to open our doors to guests too – to try to close the gap between expenses and income – we wanted to see how they did it.

The first surprise was how far it was. We left the highway near the village of Guachipas and then drove for about an hour over the mountains, on a dirt road, to get to the house.

There, after such a long journey, we expected a warm reception. At least a porter to collect our luggage. But there was no one in sight.

The main farmhouse, or “sala,” as it is known locally, is long and low… modest, but substantial… built in the early 19th century. It consists of two courtyards, separated by a narrow central building with a hallway through the middle of it.

Around one courtyard are the bedrooms. The other is framed by the living room, kitchen, dining rooms, and some other rooms of unknown purpose.

We went in the front door. Still, no one. Finally, we found someone in the kitchen who then went to collect the young woman who runs the place.

“Welcome to Pampa Grande,” she said, with a broad smile… and one hand stroking a very pregnant stomach. She is awaiting twins.

She gave us a key and led us to our room, bidding us to park our pickup behind the house. Later, we got together with a small group of English and German guests for drinks in the living room, with a fire in the fireplace and much gaucho and Guachipas paraphernalia – knives, stirrups, funeral pots – arranged on shelves on either side.

An hour later, the group moved to the “comedor” for a family-style dinner.

There is always a risk, when you stay in a place like this, of being stuck with a group of people you don’t especially like. But if you are lucky, the other guests have something to tell you.

What made our trip especially enjoyable was that we found ourselves in likable company. The other guests had traveled extensively and paid attention.

We discovered that we even had friends in common – in Ireland. One worked in the House of Lords. One was a farmer. One had lived in the Far East and worked for humanitarian groups in Vietnam. One was a lawyer for sports stars. And they all had stories to tell.

“You wouldn’t believe how crooked the industry is,” explained a young German. “There’s just so much money in sports. Everything is money.

“A few years ago, you could sign up a player [he was speaking about soccer teams], with a contract that was just a few pages long. Very simple. Now, they’re 50 to 100 pages… covering everything. Endorsements. Doping. Broken legs.

“The weather is so important to so many things,” interrupted the farmer.

“Big farmers pay for fancy computer forecasts that tell them when to plant… when to put on fertilizer… and when to harvest. Fertilizer is a bigger expense than seeds, for most farmers. You don’t want to put it on and have it wash away. So, the weather forecasters run a computer program that calculates the probabilities… and tells you when to put the fertilizer on. Apparently, it works.”

There were personal stories, too. A wife had dementia. A husband had fallen in a riding accident and was never the same. A child had drowned in the pool… a father drank himself to death…

…But despite these personal tragedies, the group was remarkably cheerful, curious, and good company. What more can you ask for?