There’s a large Metro Bank branch not far from my flat. Whenever I pass it, my eyes are drawn to a large, unusual device it has inside. It’s a circular hole in the wall with the words “The magic money machine” lit up around it in a brightly coloured swirl.

While it’s a coin-sorting machine for children, I think it’s a pretty shrewd description of the banking system. Mervyn King, the former governor of the Bank of England, described the modern monetary system as a form of alchemy. And indeed, in our fiat currency system where money is created when loans are made, banks have seemingly magical powers – licences to print money.

But the magical money machine at Metro seems to be malfunctioning… 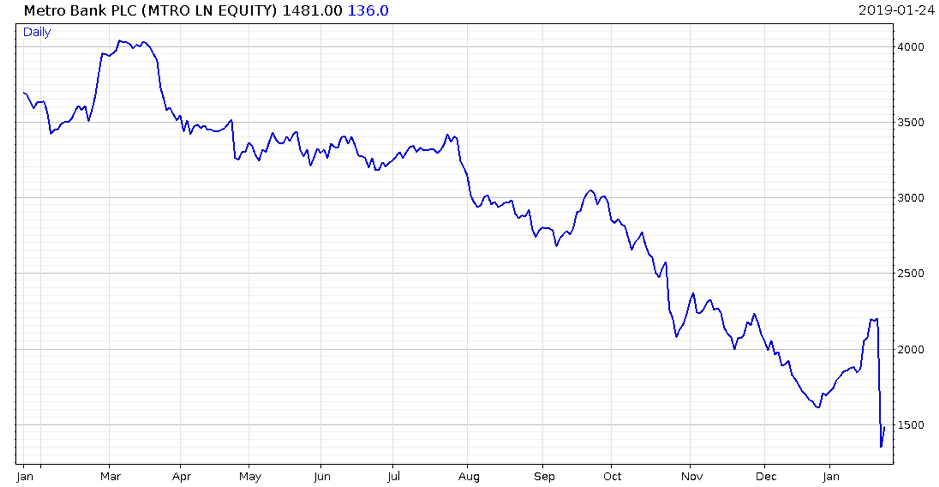 … and the reasons why sound eerily familiar.

From the Financial Times, emphasis mine:

Metro Bank has disclosed that it failed to have enough capital backing some commercial loans because of an accounting error, sending shares in the upstart challenger to Britain’s big high street lenders to their worst one-day loss…

The lender’s risk-weighted assets jumped to £8.9bn — up from £7.4bn at the end of September and about £900m higher than analyst estimates — a change that revealed the bank was more exposed to riskier loans, including commercial mortgages…

Metro said it had not seen any deterioration in the performance of the loans, but discovered they had previously been included in the wrong risk band, meaning it did not have as much capital to fund them as it should have.

Yes, an “accounting error” is what led to Metro’s sudden woes. Risky loans were made, which were placed on the books as safe, with less money put aside to absorb any losses. When the risks were properly accounted for, investors fled and shares in the bank fell almost 40%.

And in the case of Europe, it’s not one commercial bank that’s made the error. It’s damn near all of them.

Similarly risky loans have been made, not in the billions, but in the trillions of pounds. They too have been placed on the accounts in the “wrong risk band”. And while Metro put too little money aside to account for the risks, European banks haven’t had to put aside any.

The banks have been able to lend trillions and class the loans on their books as “zero risk” – provided the loans were to eurozone governments. As they were “zero risk”, nothing need be put aside as insurance in case of losses.

This accounting error comes from the very top – it was made by the European authorities, not the banks. This is what has enabled the vast accumulation of risk assets, with little put aside as insurance. The risk makes the risks systemic and the consequences much graver.

My colleague Nick Hubble has prepared a briefing on just how pervasive this problem is, and what the consequences will be for the entire euro project. In his eyes, the 40% loss Metro Bank investors took to the chin is nothing compared to the haymaker hurtling towards the bruised banks of Europe. Click here to read his briefing.