The devil arrives in Deutschland

The devil arrives in Deutschland

The European Spring is coming to Germany. But before we get to that, I’ve an announcement to make. My colleague Nick Hubble has just returned from a trip to the heart of the EU, where he delivered a message so subversive he reckons he’s now an “enemy of state”. Click here to get the full briefing.

Germany, once “the sick man of Europe”, is sick once again. The engine at the centre of Europe’s economy is spluttering.

We’d been predicting a German recession in Capital & Conflict since late last year. The country seemed to have dodged a bullet when its data office posted narrowly positive economic data recently, but it appears somebody hasn’t been doing their sums. From the Telegraph:

The German data office originally thought the country had squeaked by with a flicker of growth in the fourth quarter, but City analysts say it will be forced to revise its figures after a blizzard of dire figures. German GDP contracted 0.8pc in the third quarter.

Looks like the US and China picked the wrong time to throw a Cold War. With globalisation under attack, so are the countries that rely on it. Germany’s economic expansion over the last nine years was driven more by its exports than anything else – much of those going to China in the form of high-grade engineering products.

The German economy is thus strongly tied to China’s. And with China hitting the brakes, so too is Germany’s industrial production:

That contraction at the end of last year is the strongest since the financial crisis. Back then, it was China’s massive state-run stimulus programme that resuscitated the German economy. Today, it’s the other way round – a lack of Chinese stimulus is causing Germany’s economic pain. On top of that, the US is set to unveil new tariffs on EU car exports as early as next week. Not looking great BMW and Mercedes.

And all in all, it’s not looking great for the German stockmarket: 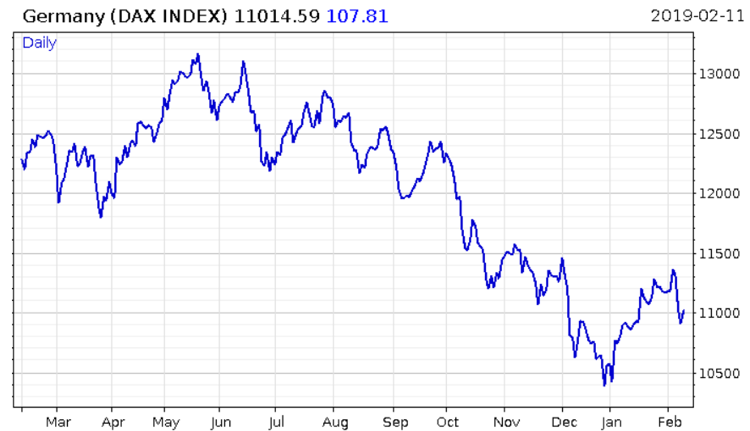 When Germany was “sick” in the early 2000s, the European Central Bank (ECB) cut interest rates for the entire eurozone on its behalf. As a result, the southern European countries got easy access to debt when they didn’t need it, which led to the Greek debt crisis.

The dose makes the poison – what aided Germany, sickened Greece and Italy. As William Makepeace Thackeray once wrote, “before a man goes to the devil himself, he sends plenty of other souls thither”.

The ECB already has interest rates nailed down in negative territory. Is another massive round of asset purchases, and much deeper negative rates on the way? Quite possibly – but the sick man won’t be healed.

I think what may surprise many investors is a dramatic rise of “populism” in Germany in the near future, to a much stronger degree than we’ve seen so far. With Germany seen as the greatest stakeholder in the European project, it will shock some. But domestic economic pain won’t go ignored by German citizenry, who will start to question the status quo much more aggressively.

The European Spring continues. What’s the endgame? My colleague Nick Hubble went to Brussels himself to find out – and prepared this briefing for you from within the European Parliament itself!