Rage of the thirsty

Rage of the thirsty

Recent analyses, notably from the World Bank, show that while levels of inequality at a global scale have gone down, the average person lives now in a more unequal country than in the late 1980s…

… inequality does not only deter investments and growth through an inefficient allocation of capital and resources, but it also enhances the risk of social and political instability, increases crime rates, corruption, violent conflicts among groups…

According to Der Spiegel, a third of Germans harbour smouldering envy and suspicion towards the rich. And those folks won’t be changing their minds anytime soon – house prices in Germany are getting increasingly unaffordable even as the real economy is faltering.

This bitterness against billionaires is even more common amongst the French, and no doubt is contributing to the violence breaking out there. More of such unrest in Europe is no doubt on the way.

To use a metaphor, The Titan’s Goblet as illustrated by Thomas Cole (right) has become unstable. Wealth inequality around the world is reaching levels never seen before. In the US, the top 0.01% are taking home an even larger share of total US income than the “Robber Barons” were in the 1920s.

So much wealth has accumulated at the top of the goblet, and so little has trickled down to fertilise the stagnant earth beneath, that the whole thing has started to shake. Those below are thirsty for the water they know has been accumulated above.

Some of the blame for this wealth divide can be levelled at quantitative easing (QE). It’s been a great decade to own financial assets purely because central banks have been printing money over time to buy them and increase their value. As it’s the rich who own most of these assets, they’ve simply got richer with little effort.

The massive boom in equities in 2017 minted 357 new billionaires (an almost 15% increase in their global population) thanks to the actions of a few central bankers (here’s lookin’ at you, Janet Yellen). But the wealth inequality created by QE is only one side of this sharp object.

On one end of the spectrum, it is possible that productivity growth has delinked from typical compensation, casting doubt on the common aphorism that “a rising tide lifts all boats”.

– “Productivity and Pay: Is the Link Broken?” Anna Stansbury and Lawrence H. Summers

I had the pleasure of speaking to Luke Gromen, a geopolitical and financial analyst, recently. His definition of populism is the best I’ve encountered so far: “a sudden marking-to-market of a decline in living standards over an extended period of time.”

The wealth disparity created by QE is just the shadow of the Titan’s Goblet. For decades, while the everyman has worked harder and become more productive, his compensation for it has not increased at anything like the same pace. The “American Dream” has not been delivering for the developed world, not here in Britain: 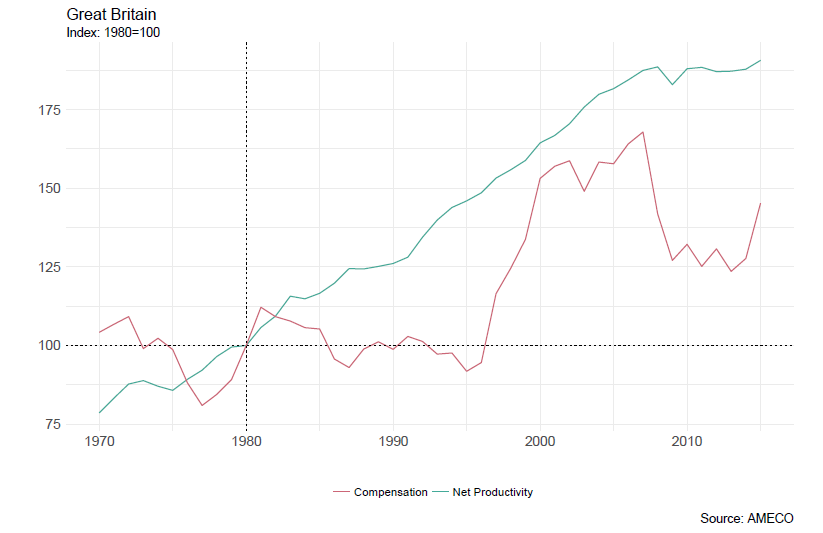 Less so in Italy:

And even less so in Greece:

Not to mention Germany: 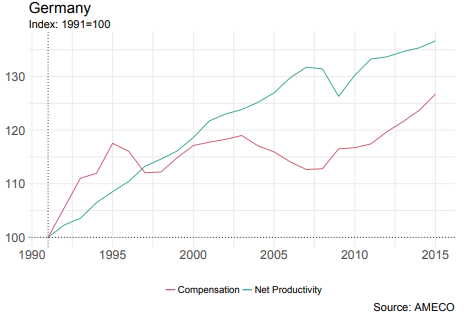 In fact, all across the developed world this divergence has taken place. And it’s not gone unnoticed.

Germany is a particularly interesting case, as it has yet to exhibit domestic unrest that other “populist” countries have exhibited, despite the fall in income share of the lower 50% relative to the top 10%:

But all across the developed world, increases in productivity have not been rewarded with increases in compensation. And it’s discontentment with this, brewing for decades, that is finally coming to the fore. The very acknowledgement that a rising tide does not lift all boats raises major questions about the status quo, which those in power – who advocated for bailing out the banking system – would prefer not to answer. 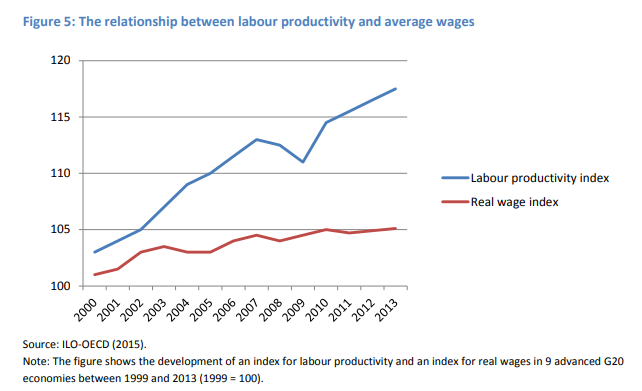 Why did this divergence take place in the first place? Well, it only really began in earnest in the US in the early 1970s, when a certain President Nixon took the world off the gold standard…

But that’s a tale to be told during our first ever Gold Summit, which I’ve been very happy to be working on with Eoin Treacy. We’ve gathered six of the world’s top gold experts to speak about what the future holds for the yellow metal – and why it matters to you. Click here to get your free ticket.

For now, the Goblet stands tall and those stranded beneath, branded “populists”, are raging with thirst. A return to stability will not occur without major disruption.

I was fortunate enough to see The Titan’s Goblet along with a few others of Cole’s paintings at the National Gallery last year.

It’s worth seeing if you get the opportunity. The painting itself is much smaller than I expected – but little could match the scale of what it represents.