Let’s do the maths.

The total value of non-performing loans in the European Union is valued around €900 billion. Banks have made provisions, meaning set aside money, for about half of that. Leaving about €450 billion in questionable loans.

The total value of Europe’s banks, going by the MSCI Europe Bank Index, is about €730 billion. 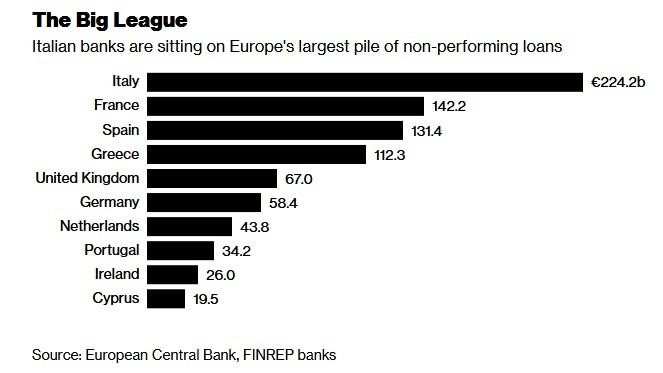 Then again, it’s the banks’ other problem that I’m really worried about.

Because European banks hold a huge amount of the most dangerous investment out there – European sovereign bonds. And under bank rules, these are considered risk free. So banks don’t hold any reserves to guard against losses.

Italy’s banks are especially loaded up on sovereign bonds. This chart shows they have the highest proportion of sovereign bonds in Europe, as a percent of their total assets, in grey.

These are precisely the assets tumbling in value as Europe’s sovereign debt crisis unfolds in the news each day. The EU budget battles, the ECB withdrawal of QE and the rising interest rates.

Given the losses staring Europe’s banks in the face, I’m going to ask you again: Does the Italian banking system even exist?

I’m not so sure. It might be completely insolvent. A zombie banking system. A ghost.

Worst of all, the Italian government can’t stage a bailout because its own financial woes are part of the problem.

If you’re not worried, there’s not much more I can say.

If you are worried, and you’d like to find out what happens next, and what it means for your bank right here in the UK, then I have news for you.

I recently published an urgent update to my forecasts for 2019. It involves a blow up in the banking sector.

I explain just what’s going to happen, how it’ll strike the British banking system in 2019, and what you should do about it.

I recommend you read it now – while you can.