We mentioned on Tuesday how the last thing the eurozone needed right now was a Cold War between the US and China.

Germany is the economic engine of the eurozone, fuelled by exports to the US and China. When those economies slow, or look to reduce their dependence on other countries, it’s bad news for Germany, and thus the eurozone.

In this way, the eurozone’s economy is married to globalisation. Somewhat ironic, considering how opposed to free trade it can be with countries outside the EU…

But let’s leave the politics for a moment and examine the consequences. Germany just claimed in its now revised figures that its economy grew by exactly nothing – 0.0% – in the last quarter of 2018 (this conveniently allows Germany to say it’s not in a recession). The eurozone as a whole just saw its biggest industrial contraction since the financial crisis: 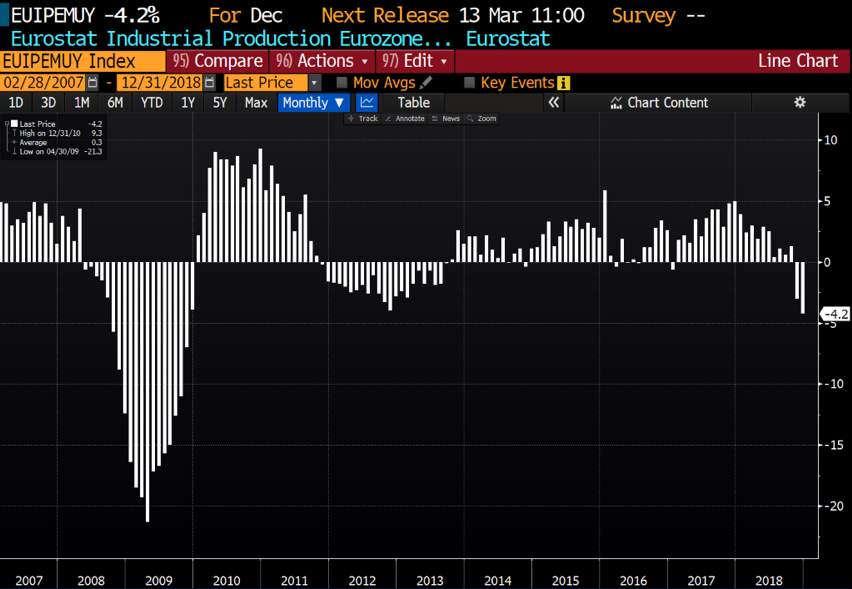 Call me a perma-bear, but I expect this is the thin end of a very large wedge… and it puts increasing pressure on the European Central Bank (ECB) to turn on the money spigots yet again. Further negative rates, an even more colossal quantitative easing (QE) programme and a European war on cash loom ahead.

If the ECB does this, incidences of “populism” in Europe are set to go parabolic. But that is not the ECB’s territory, and so at the office my colleague Nick Hubble is considering starting a “countdown to QE” calendar.

Nick thinks the internal political situation for eurozone countries is gonna get much, much worse… The European Spring is still in its infancy, and has yet to make its explosive continental debut. But the stage is set, starring rioters and armed police, and with special effects like insolvent banks, capital controls, and pyrotechnics.

And Nick isn’t the only one. Since he made his prediction last year that the troubles beginning in Italy would shake the foundations of the euro itself, we’ve slowly seen the financial press start to get bearish too.

This is likely informed by those in the financial sector, who’ve begun to realise the future is looking much less rosy for the eurozone as globalisation goes into reverse gear, and The Italian Problem comes to the fore.

With all the poor economic data coming out of the EU, I thought I’d check the ZEW Economic Sentiment Index, which asks hundreds of analysts and economists at financial institutions whether their outlook for certain economies is positive or negative over the next six months.

Here’s the ZEW Economic Sentiment Index for the euro area for the last ten years: 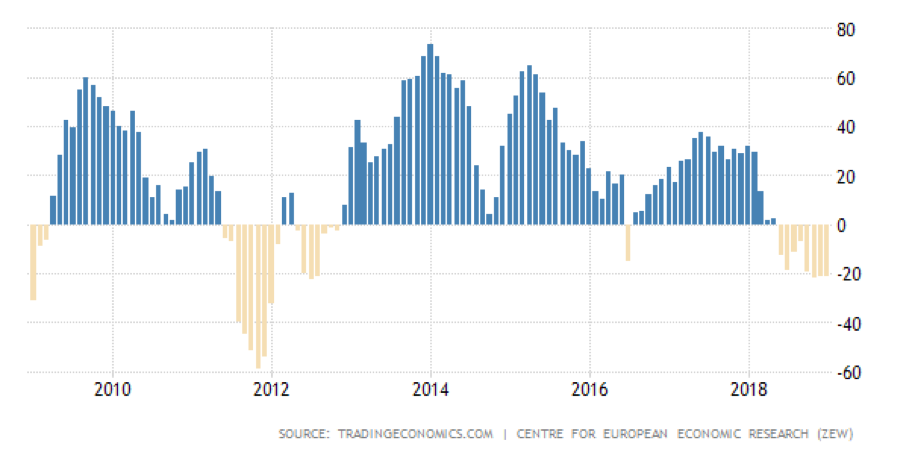 The data comes from within Europe – ZEW stands for “Center for European Economic Research”, or “Zentrum für Europäische Wirtschaftsforschung” (try saying that without pausing)

After years of seeing only sunshine on the horizon, and only a tiny bit of rain in 2016, the folks at the banks, insurance companies, and finance departments are taking out their umbrellas.

They’re not yet running for the hurricane shelter as they were during the Greek sovereign debt crisis – but Nick reckons they’ll come around soon enough.

What makes the state of the eurozone’s economy as a whole so important, is that when its growing, all of the “bad stuff” inside of it – the insolvent banks, the insane levels of unemployment in certain countries, the stupendous levels of debt – can all be carried for the ride. Provided there’s forward momentum – at least a little positive economic growth – the issues can be pulled down the road. They can be carried along and ignored.

But when the whole thing runs of gas, this can no longer occur. The problems, now too heavy to carry, come to the fore. Citizens begin asking where these burdens come from in the first place.

They start to question the merits of “ever closer union”, if it means their own government cannot keep their spending promises. If it means sharing the economic misery created by a currency union.

But they will find such issues are not open to debate.

PS The strategies that will preserve wealth through the economic flux that is to come is a key focus of ours at Southbank Investment Research – as is seeking investments that could flourish during a downturn. Today I’m pleased to announce that I have been working closely with Eoin Treacy to put together Southbank Investment Research’s very first Gold Summit (full details here).

We have flown in six of the world’s top gold experts and insiders to show you why gold could soon see a significant surge in demand. Beyond that, Eoin will be sharing his personal strategy for profiting from what could be the next big run-up in gold.

For anyone interested in gold or keen to get a deeper insight as to what’s really going on in the monetary system – for a very limited time, you can register to the summit for free. Tickets will go on sale for £500. So do take advantage of this short window to claim a free all-access online pass.