I got up early this morning and headed on to the roof, hoping for a peek at the eclipse. I was met instead by birdsong and a sky draped in red clouds. Oh well. Hopefully you were luckier than I and got a glimpse of it.

Today, we go looking for a different eclipse. As my colleague Nick Hubble detailed extensively in How the Euro Dies, the eurozone has plenty of problems. But how large a shadow must they cast, before they eclipse all benefits of staying in the euro?

The problems facing the eurozone’s banks certainly blot out a lot of light. Their large quantities of bad debts (“non-performing loans”) on their balance sheets, and stagnant growth in Europe does not make for a profitable environment. To illustrate just how grim things are, take a moment to consider that JP Morgan makes a third more in profit than all of Germany’s banks combined.

And those are just the “non-performing” loans. The performing loans aren’t all that great either. The same European banks, under the assumption that eurozone government debt is risk free, have bought huge quantities of it. When the market for that debt falls, as investors grow fearful, those banks take a hit to their capital. Conversely, when the banks encounter problems, that government debt gets sold off too, as bank bailouts aren’t cheap. And they’re especially expensive for governments that can’t print their own currencies, like those in the eurozone.

I’ve a theory that if Germany enters a recession, the European Central Bank’s response will cause enough stress to significantly change, if not break the euro as we know it.

Germany only narrowly dodged a recession last quarter, and currently experiencing the lowest economic growth in five years. Meanwhile China, Germany’s largest trading partner, exhibits GDP growth (if such a politically important figure from a state-run economy can be trusted) at its lowest since 2009. 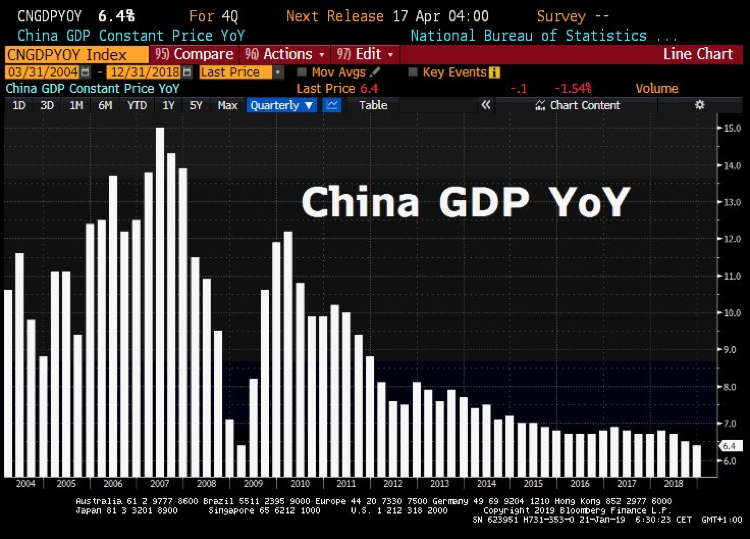 An economic slowdown in China does not bode well for Germany.

With rates still negative at the ECB, and having printed almost £4.2 trillion already, what will the ECB do if Germany, the largest gear in the euro machine, slows down?

Drag interest rates further into negative territory? Take out the chequebook and buy a few extra trillion euros’ worth of bonds? In my view, this can only further wealth disparity and domestic unrest, leading to further euroscepticism. Europe’s eclipse may be a lunar one, caused by China’s red shadow.

Keys to the monetary kingdom

Interestingly, some ambitious eurosceptics, like Marine Le Pen of France, are becoming more comfortable with keeping the euro… if it means they get a shot with the ECB’s printing press.

From RT, emphasis mine:

“Unquestionably, the euro is a blow for France” but leaving it is “no longer a priority,” said Marine Le Pen on January 17, advocating a change in monetary governance of the European Union…

“The governance that has been chosen and which aims for the ECB [European Central Bank] to fight only against inflation and to refuse to fight against unemployment, poses a real problem,” said the finalist of the presidential election in 2017.

“The monetary creation by the EU, instead of being sent to agencies to be able to invest in the real economy or even directly to states […] is [given] to the banks and is lost, is diluted in the virtual economy,”

Note the suggestion to give the central bank an unemployment target – ie, if national unemployment is not at some arbitrarily low level, the central bank must stimulate the economy through rate cuts, quantitative easing (QE), or through some mutated form of the latter. The political will to do this is here in the UK too: just last year, I attended a presentation by a member of the Shadow Monetary Policy Committee who advocated that the Bank of England adopt a similar mandate.

The suggestion that central bank cash be printed for state use is of course very similar to Jeremy Corbyn’s “People’s QE”. While across the pond, political support for Modern Monetary Theory, or MMT, increases – the socialist Alexandria Ocasio-Cortez being the latest proponent of the idea. MMT puts money creation directly in the hands of the state, giving the government total control over both monetary and fiscal policy, with no limit to the amount that the government can spend.

By experimenting with QE, the central bankers opened Pandora’s box. They showed the political class that money can be printed without causing rampant inflation on the streets. The magical money tree, radical politicos can now claim, is no myth but very real, a utility to be harvested with both hands.

“They got to use it,” they can claim, pointing to the central bankers. “Why can’t we?”

I would say “What could possibly go wrong?”, but I think something already has.