Through a different prism

Through a different prism

For a moment, think of Capital & Conflict (and the other Southbank Investment Research publications) as a kind of prism.

If you look through that prism, you will see the world of investment a certain way.

The world will look like a very modified version of the famous cover from New Yorker magazine with a cartoon that shows Manhattan at the centre of the world.

The Capital & Conflict prism would have Southbank Investment Research’s office – on the south bank of the Thames – in the foreground: the City of London and Canary Wharf would also clearly be visible, along with hedge funds in Mayfair.

The Bank of England and HM Treasury would be disproportionately large in that part of the picture.

A little further away, you would see the rest of the UK (with Boaz in Scotland) and the richer countries of the European Union (EU): the European Central Bank (ECB) would be biggest institution that is visible.

Across a very narrow Atlantic Ocean, you would see key features of the United States, such as the financial district of New York, Washington DC (including the White House, Congress, the US Treasury and the US Federal Reserve), Silicon Valley, Hollywood and a number of manufacturing places.

The rest of the world would be a blur.

However, you would see that China represents a large part of it.

You would also notice semi-conductor factories in Taiwan, as well as gold mines in Australia, Canada and several other locations.

A large signpost would point to the crypto world, which lies just outside the picture.

Taken together, the picture would summarise many of the views of Southbank Investment Research’s editors:

Now, suppose that you looked at the world of investment through a different prism.

Imagine that, instead of focusing on developed markets, you concentrated only on emerging markets and frontier markets.

As yesterday’s edition of Capital & Conflict explains in some detail, emerging markets are in poorer countries than the developed markets: they also tend to have less developed stock markets.

Frontier markets are like emerging markets, except that they are far harder for foreign investors to access.

MSCI is a company that compiles and calculates indices which define stock markets around the world.

These indices are widely used by investors as benchmarks to measure investment performance.

MSCI is possibly the best-known arbiter of exactly which countries are included in the developed markets, emerging markets and frontier markets.

The tables below show what were some of the key features of the MSCI Emerging Markets and the MSCI Frontier indices as at the end of May 2021. 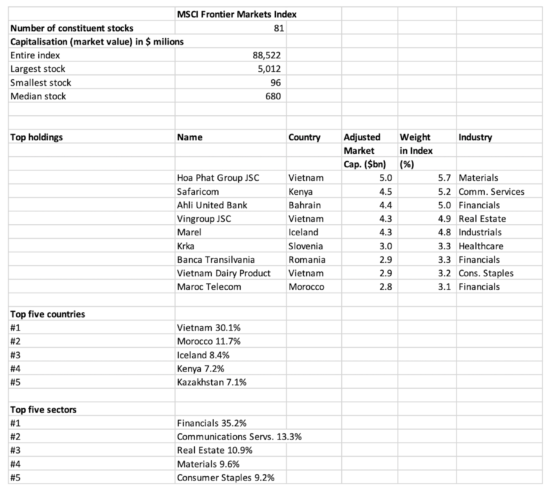 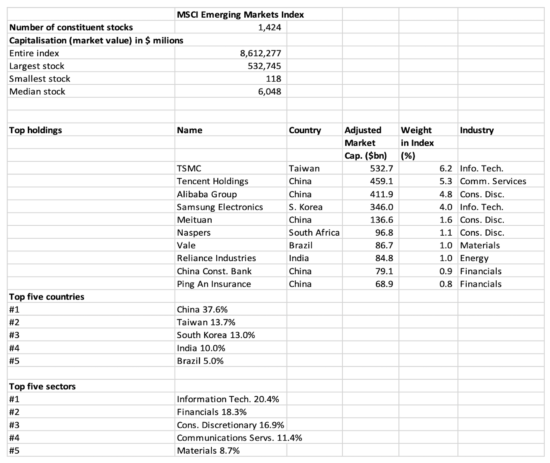 In order to put all the facts and figures into context, remember that the MSCI World Index, which is a widely used measure of the investment performance of developed markets, includes 1,562 stocks with a combined market capitalisation of $57,083 billion (i.e. just over $57 trillion).

A glance at the leading stocks in the MSCI Emerging Markets Index will tell you the following:

And a glance at the MSCI Frontier Markets Index will highlight the following:

The bottom line is that many of the ideas that are front of mind for Southbank Investment Research’s editors can also be seen in the emerging and frontier markets.

But, where are the actual and potential opportunities?

This is a question that will be looked at in detail in the coming weeks and months by many of our editors in Exponential Investor.