BROUGHTON, EDINBURGH – Our very first Beyond Oil Summit feels like a different epoch… but it was only last year.

Our plans for the event, featuring first-class energy experts on the future of black gold, began at the very beginning of 2020 (remember when Donald Trump assassinated Qasem Soleimani and there was all that chatter about it starting WW3? That was only 18 months ago).

The WuFlu shock in March threw a spanner in our planning for the event (amongst many other things of course). But we ploughed on with it, and managed to get the event live in April.

And a damn good thing that turned out to be, for April was an historic month for the oil market. While a year may have passed since, the bottom-right of this chart (WTI oil futures) is still astounding to look at: 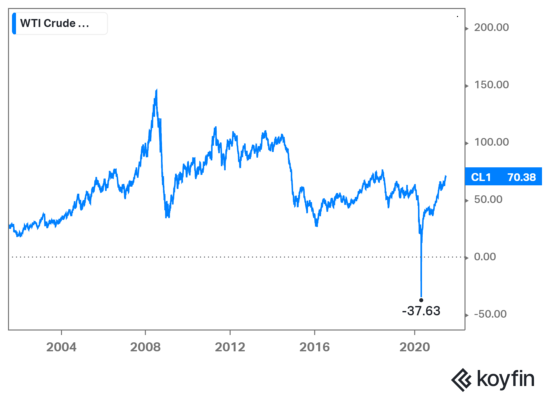 While oil crashes are to be expected from time to time, negative oil prices were not. This move below zero took the market totally by surprise, something evidenced by the almost ludicrous explosion in the oil volatility market (where traders buy and sell options on the oil price to hedge against or speculate on future price moves): 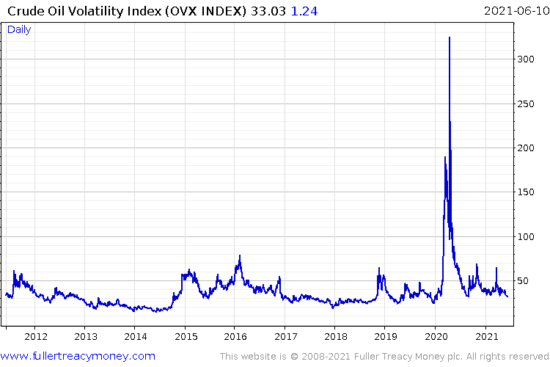 The craziness certainly drove the message of Beyond Oil home. James Allen, our energy expert behind the summit, wanted us to question our established beliefs about energy – and negative energy costs certainly helped with there.

Despite the pandemic and all the problems it created, that first Beyond Oil Summit was a roaring success. So much so, that we produced a sequel later in the year, with a new roster of experts and with the tailwind of governments announcing major green initiatives.

It too was a roaring success… and now here we are today, on the cusp of a third Beyond Oil Summit. In this one, they’ll be exploring more than just the energy market – but how a green transition might disrupt and force change the existing bulwarks of the global economy (construction materials, for example – cement isn’t very green-friendly by default, but the companies who can make it so will be richly rewarded).

Expectations are high for the event, and rightfully so. The third instalment of any franchise is always fraught with the risk of failing expectations and staining reputations (Alien 3 comes to mind).

But I’ve no doubt James Allen and Kit Winder shall deliver the goods once again – and if you take a look at the roster of experts who will be presenting at the event, I think you’ll agree with me (they’ve brought in a chap called Kingsmill Bond, for heaven’s sake).

It’ll kick off on Monday – don’t miss it!