REDWILLOW BREWERY, DERBYSHIRE – “The value of money has been destroyed by around 98% since I’ve been living there” a colleague tells me over video chat.

“Inflation has been kicking around 50% for the past five or six years. Which makes me laugh a bit when the UK rate creeps up by half a per cent and everybody panics…”

The man in question has been living for over a decade in a country where extreme currency abuse has been par for the course for the lion’s share of the last century: Argentina.

It’s a fascinating nation – nearly the size of India yet with only 4% of its population and laden with some of the richest arable land on the planet. Its agriculture built it into a pillar of the global economy through the 1800s, becoming the tenth wealthiest nation in the world and accounting for 7% of all global trade.

All the natural advantages it has been blessed with still remain, and yet Argentina is now the 69th wealthiest country on the planet. Forget greatness from small beginnings – this is failure from great beginnings.

The country should have everything going for it, and yet it doesn’t to such a degree that the subject of the “Argentine Paradox” has become a factory for academic papers, all asking the same thing: how could such a prosperous nation become so impoverished?

Where there’s a will, there’s a way, and the politicians have managed to bankrupt that country every which way they can. Nine sovereign defaults, multiple hyperinflations, endless wrangling and wrestling with the International Monetary Fund for more bailout money… Argentinians have been driven over the hill and round the bend with the endless government meddling with the economy, the schemes and programmes they say will make life better but which only beat and bludgeon what would otherwise be a thriving economy.

The Argentines just learn to live with it. The wealthy get their wealth offshore; the less so buy as much real estate as they can rather than keep it in the bank, and the everyman keeps a stash of US dollars for his savings. And in a modern twist, Argentina now has a thriving crypto economy, as youngsters seem to like using bitcoin to exchange value instead of pieces of paper with increasingly large numbers printed on them. If you think BTC is a harsh portfolio mistress, try Argentinian pesos (ARS)…

Here’s how many pesos a dollar could buy you over the last 25 years. Or to put it another way: the blue line represents the value of pretty much everything compared to Argentinian pesos since 1990: 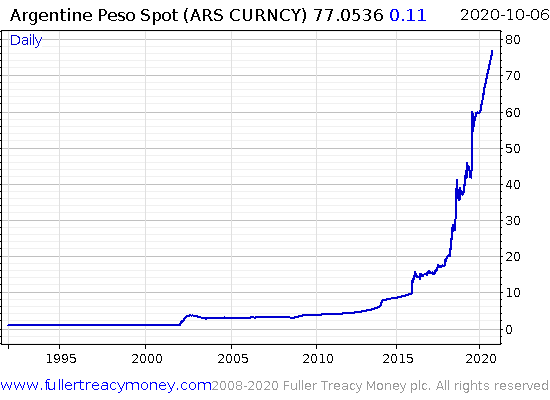 … and that’s the official exchange rate – not the black market rate, which is significantly higher.

You can’t inflate away a pretty view however, and so despite all of the money printing and grift in Argentina, my colleague still loves living out there. Provided you’ve taken

(And hey – while Argentina might be in a bad financial situation, Venezuela is a lot worse. In fact, the Argentine economy he tells me, is now full of Venezuelan emigres who’ve fled the joys of socialism.)

But having lived in Argentina for many a year, he’s also become well accustomed to the political rhetoric that drives the currency debasement and chaos for the citizenry – something vital for any investor living out there, as there’s always the risk of the government going beyond the call of duty to destroy its citizens’ wealth.

And interestingly, being familiar with both the financial problems and the politics that arise trying to solve them… he thinks Europe is destined to follow the same route as Argentina.

He’s beginning to hear the same the same complacent attitudes towards debt amid a stagnating economy, and the same thoughtless willingness to interfere with it to meet political goals. The printing presses, sovereign defaults, and grand currency debasement beckon…

This isn’t something he sees happening immediately – he’s looking at activity on the fringe. But in good time, he expects the Argentine Paradox will exhibit itself in Europe, and breed another library of papers published by academics wondering how so much failure could be borne in Europe from such great beginnings…

PS Tonight, you’ll hear from a man who knows a thing or two about the problems brewing in Europe. He’s only recently begun working with us at Southbank Investment Research, but I’ve no doubt you will recognise him. He’s a very high-profile figure, and you may not agree with him on many things… but I’m sure you’ll want to hear what he has to say. Keep an eye out.