GUALFIN, ARGENTINA – Today, we look at what is going on in Venezuela. For amusement as well as for instruction.

As long-term Diary readers know, we are connoisseurs of financial disaster. In Venezuela in 2017, we think we see an especially good vintage.

But before we get to that, we introduce our Doom Index.

The idea is to try to measure the tension in the system… and get a better idea of when the rubber band is going to snap.

Our research department, headed by Nick Rokke, looked at 11 indicators that – when aggregated – have coincided with the last two major blowups:

We were surprised by the results. As you can see from the chart below, despite all our gloom and doom in these pages, our index shows we are not yet in the danger zone. 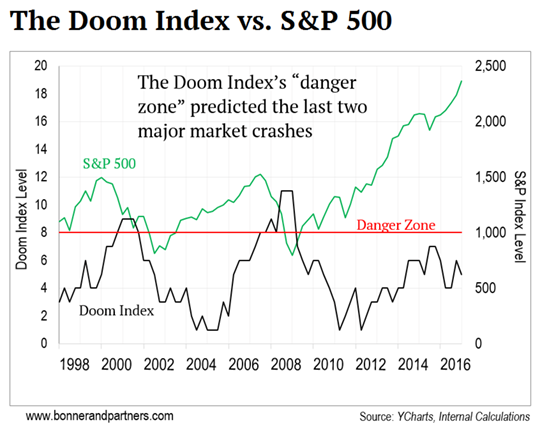 You can find more details about the Doom Index here.

But let’s turn to an economy where doom is already well underway… and getting doomier by the day: Venezuela.

Actions have consequences. In public policy, it is impossible to say what the consequences will be. There are too many delusions and too much smoke.

Take a policy said to eradicate city rats. Its real purpose is to reward a large political donor who owns a pest control firm. It ends up killing the pigeons.

Often, policies with clear and obvious purposes end up producing outcomes completely at odds with the stated objectives.

Prohibition, for example, increased the number of drunks. The War on Drugs fattened drug dealers’ profits.

The War on Poverty has made poverty respectable… even attractive… to poor people.

The War on Terror has probably made a million otherwise sane and sensible Muslims yearn to blow up something with a U.S. flag on it.

Most often, these outcomes are not exactly surprises. Look more closely and you will often find, hidden behind the promises… a pest control firm!

News reports, for example, tell us that U.S. arms dealers are about to get a $110 billion payday. President Trump announced a weapons deal with the Saudis – the biggest in history.

Although the exact consequences of public policies are obscure, the patterns are familiar.

Win-lose deals – unless they are imposed by petty criminals or local bullies – require government insistence. Otherwise, no one would take the losing side.

So the more government there is… the more active, ambitious, and overbearing it is… the more win-lose deals subtract from the sum of human happiness.

A month ago, as many as a million of these disappointed people demonstrated against the government of Nicolás Maduro in Venezuela. It was the “Mother of All Protests,” they said.

What was their beef?

Hospitals have no medicine, no equipment, not even rubber gloves and disinfectants. Sometimes, they have no electricity. Deaths of premature babies have increased 10,000% in the last five years.

How did a country make such a mess of itself?

The good luck happened in 1914 when the first oilfield was drilled. The money followed.

By the 1950s, with a basically market-oriented government, Venezuela rose to become the world’s fourth-richest country in terms of GDP per capita.

But good luck allows you to make bad judgments. With the oil wealth flowing, Hugo Chávez – who described himself as a Trotskyist two days before his inauguration as president in 2007 – could impose win-lose deals on the whole economy.

Key industries were nationalized. Price controls were put in place. Wealth was redistributed.

Win-lose deals can redistribute wealth but only to the extent win-win deals create it. Take away the win-win deals, and the wealth soon runs out… as it did in Cuba and the Soviet Union.

Now the tank is about empty in Venezuela, too.

It doesn’t matter what you call it – government is always a means for the few to exploit the many.

The few use every resource available to them to keep the hustle going, with special attention given to manipulating the gullible mob.

The typical citizen rarely has any idea of what is going on… and doesn’t have much curiosity about it. As long as he has credit for a new pickup and a champion who promises to smite his enemies, the common man will go along with almost anything.

But the Venezuelan auto industry has been ruined. And there’s no credit available. So there are few new pickups on the streets, and much of the public has turned against the government.

Not surprisingly, the policies that destroyed Venezuela delighted U.S. economists and politicians – who were eager to impose win-lose deals of their own.

In 2007, Nobel Prize-winning economist Joseph Stiglitz praised the “positive policies” in health and education of the Chávez government.

These days, the American dream is more apt to be realized in South America, in places such as Ecuador, Venezuela and Argentina, where incomes are actually more equal today than they are in the land of Horatio Alger. Who’s the banana republic now?

Sanders had no idea what was really going on in Venezuela. But he was right about what was going on in the U.S. It was on its way to becoming a banana republic.

Only without the bananas. Or the republic.