Hot crop: what is driving the boom in these commodities?

Hot crop: what is driving the boom in these commodities?

ABERDEEN, SCOTLAND – The inflation key is in the lock. It will be turned once the world economy fully reopens. And when that happens, Western investors will be caught unawares by the destructive nature of that force which they haven’t dealt with in earnest for decades…

… or at least, that’s how I’ve been thinking about it. But am I wrong? What if we reopen, maybe get a little spike of higher prices, and then the forces of ageing demographics and over-indebtedness push the inflation genie firmly back into its golden lamp?

One must always interrogate and challenge one’s own views to stay ahead of the game. And I wonder if any of the inflation signals I’m relying on are giving me a “false-positive”. 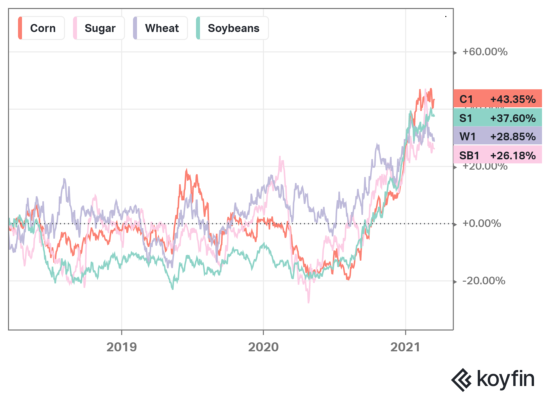 Higher commodity prices = higher input costs for the creation of products. While higher gold prices don’t lead to higher costs in many things other than jewellery, commodities with very broad applications like sugar certainly do. And when those costs are passed on to the consumer, they can lead to higher prices in other goods and services in turn, thus stoking a cycle of inflation.

But is this rally in agricultural commodities really a sign of money being debased? Of currency being devalued?

For I am being a little picky here with that chart. Other soft commodities (“softs” – commodities that are grown rather than mined) like cattle and cotton haven’t been shooting the lights out the way corn and soybeans have.

The main question I have is whether these price increases are indeed a result of money printing… or due to the supply chain disruption caused by the sudden lockdowns last year.

In the last 12 months, there has been widespread crop destruction all over the world. When global supply chains shut down, businesses and schools stopped purchasing food, and labour ceased to be available to help harvest the crops, vast quantities of agricultural commodities were dumped and left to rot. The food waste in some parts of the world was of such a scale that is truly hard to comprehend – it’s a tragic waste that has put brutal pressure on the farming industry.

But if these higher commodity prices are a result of those disruptions, and not due to more money in the economy chasing those goods, then said prices might cool off in time when the economy reopens.

There’s a similar case to be made with the likes of lumber, which has boomed extraordinarily in price over the past year: 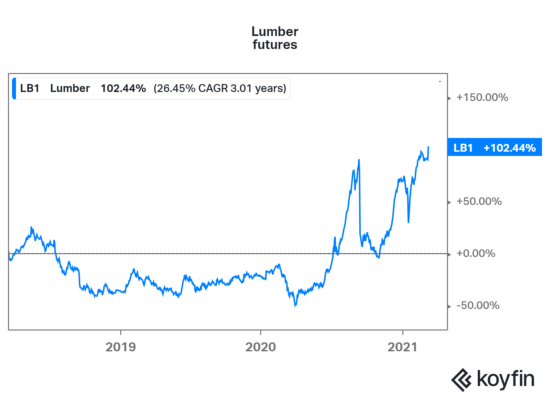 Again, higher lumber prices mean higher base costs for lumber products – inflationary. Has this been caused by the government’s monetary excesses, however? Well for now, it’s being attributed to the rise in home renovation now that everybody’s stuck inside. If that’s the case, once everybody heads for the great outdoors again, won’t that market cool down, and erase that inflationary signal? I wonder.

I still believe inflation is coming our way – I’m a strong believer in the model put forward by Charlie Morris in yesterday’s note that gold and oil are twin messengers of inflation. We’ve heard oil start chirping, and now we’re waiting on gold (more on that later in the week).

But you have to make sure your instrument panel is telling you the right information. Faulty indicators are almost as dangerous for investors as they are for pilots…