Free weddings and a funeral

Free weddings and a funeral

SODERMALM, STOCKHOLM – The last time the Nikkei was this high, I hadn’t been born yet.

We’re a way off that ‘89 all-time high… but if the market has taught us anything this year, it’s that no dream is too big.

This latest move will no doubt be received warmly by several of my colleagues here at Southbank Investment Research. The country and its stockmarket has quite a fanbase here – indeed, my colleague Nickolai Hubble over at Fortune & Freedom now lives out there with his Japanese wife.

Eoin Treacy may not have married a Japanese lady… but the Nikkei did pay for his wedding. There’s been a special place in his heart for the Nikkei ever since he traded its move higher and the profits more than covered the cost of his nuptials.

(While I can’t guarantee any free weddings, those seeking the next great trade should take a look over here.)

“Everyone keeps pointing out that [the Nikkei] hasn’t recovered its all-time highs,” says our energy analyst Kit Winder, “but so what? it’s almost tripled in eight years!”

If only we could say the same of our dear FTSE 100… or even of our smaller UK AIM 100 index, which has made the same performance in eight years as it has since March… 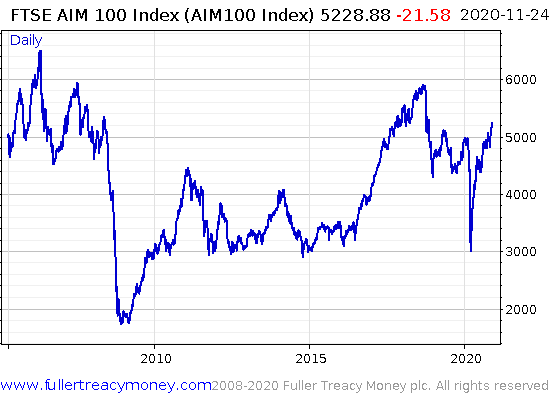 Zoom out further to the UK AIM market as a whole, and its performance since March is even better… 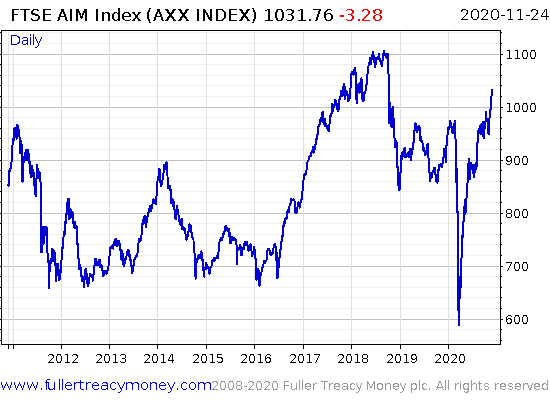 While we share a lot with our ally Japan – we’re both island kingdoms with monarchies – the Japanese have definitely been beating us at the whole “stockmarket” thing in recent years.

Tim Price over at The Price Report is another Southbanker with an interest in Japanese stocks. Shunned for so long after its collapse in ‘89, it’s a “target rich environment” for value investors like him looking to pick up stocks with intrinsic value much greater than their price.

“Japan was the dress-rehearsal – the world will be the main event”, he often says. Japanese companies are battle-hardened against brutal debt deflation, declining demographics and central bank largesse – they’ve weathered these problems for much longer than companies in the UK and US. Japanese companies sit on war chests in the trillions of dollars, which they’ve built up as a buffer against future economic shocks. I remember a fund manager telling me about a certain Japanese company which could stay in business (in theory) for more than 20 years on zero revenues thanks to the sheer amount of cash it’s been hoarding for a rainy day.

As Japanese companies are veterans of the problems now arriving in the rest of the developed world, there’s an argument to be made that we should buy them as a hedge. After all, they’ve been building a shelter against debt, deflation, and demographics for decades… while we’ve only just started.

The problem I have with that strategy is… “what happens next to Japan?”

Surely if something significant were to break from the practice of endlessly printing money and issuing debt, it would occur first in the nation that has been doing it the longest – and not the ones that are just beginning it.

The fate of Japan may be a guide to our future – but will Japanese stocks protect us from it? Are they a hedge to be relied upon, or a canary in a coalmine to be watched attentively?

I was struck by the comments of the great Jim Rogers, the commodity baron and Soros’ old investment partner, who said recently in a podcast with Grant Williams:

My colleague Nickolai is already a man of many talents: he’s a bagpiper and accomplished circus performer amongst many other things. But hopefully his stay in Japan won’t lead to a proficiency in firearms…

Wishing you a happy hump day,

PS Predicting the market’s next move is a skill which no investor has ever been able to totally master. But there is a time of day when the market tips its hand more than usual… and you can use it to give you an edge. Click here to find out more.