Blaming the snowflake for the avalanche

Blaming the snowflake for the avalanche

For the last two days, I’ve been writing to you about a big risk in the financial markets. Volatility has been decreasing, but this doesn’t mean that risk has gone down. In fact, the opposite is true. Read those articles here and here.

If volatility spikes, funds across the market will be forced to rebalance their portfolios all at the same time. This presents a huge risk to the markets, just as stop loss automation did on Black Monday, 1987.

What could cause this ‘short volatility’ system to unwind? Step up, central bankers and CEOs.

The actions of these two groups go a long way to explaining the current situation. They also provide the biggest risk to ending it.

Central banks have been supporting asset prices in two main ways. They have been printing money. This means that an increasing amount flows into the markets, pushing asset prices up. This was accompanied by very low interest rates. Low interest rates make savings less productive. People looking to increase their wealth have bought equities instead.

This decade of very low interest rates and rabid money-printing is unprecedented. This current situation is not normal.

CEOs have been playing their part too. They have been contributing to lower volatility by buying back shares.

How does this work?

Low interest rates mean that companies can borrow huge amounts of money at very low cost. They have used that money to buy back their own shares.

Share buybacks contribute to lower volatility. A large, price insensitive buyer is always ready to buy the market on weakness. This means markets don’t fall as much as they should.

Also, a fall in the number of shares artificially inflates the ‘earnings per share’ and other per share measurements. This makes the company’s performance look like it’s improving more than it actually is. This causes investors to be even keener on the company.

In these ways, central banks and CEOs have contributed to the steady decline of volatility over the last decade.

But this is almost at an end.

Central Banks will not support the stocks markets forever. Interest rates are rising once more. Policy normalisation is happening now.

Chris Cole, CIO and founder of fund-manager Artemis, summarises it like this.

“Rising corporate debt levels and higher interest rates are a catalyst for slowing down the $500-800 billion in annual share buybacks artificially supporting markets and suppressing volatility.”

Low interest rates have fuelled an increase in corporate debt. That debt has been used to buy shares, keeping volatility low. When interest rates rise, this will unwind.

Volatility and debt are linked in another interesting way.

This means that they are very poorly prepared for shocks to the system. They are fragile. And volatility is the enemy of fragility.

So, in order to justify the high levels of debt that companies have sucked up, they have to forecast a stable future. Smooth sales growth, placid economic conditions… whatever is required to keep volatility down.

But, if something bad happens, debt laden companies will struggle. As a result, it’s in their interests for volatility to stay low. Luckily, because of levels 1 and 2 of the short volatility regime – the im- and explicit ‘short vol’ layers – they have manufactured just such a happy result.

The more debt is built up, the more calm forecasts are required to assuage the fears and nervousness of the heavily indebted.

Once the calming forecasts have fed into a prediction of yet lower volatility, the first part of the chain forgets itself. Debt laden companies see the predictions of low volatility as a justification for yet further borrowing!

The Germans have a word for this – a ‘Teufelskreis’. A devil’s circle. A loop which self-reinforces with each lap.

Which straw will be the last?

The key problem with these short volatility strategies, both im- and explicit, is that they work until they don’t. Sure, they have delivered profit for nine years in a row now, but the tenth year is going to wipe you out.

I’ve often seen a skier who hasn’t fallen all week get cocky, and break his arm on the last day.

As with an avalanche, it’s impossible to say what the trigger will be. 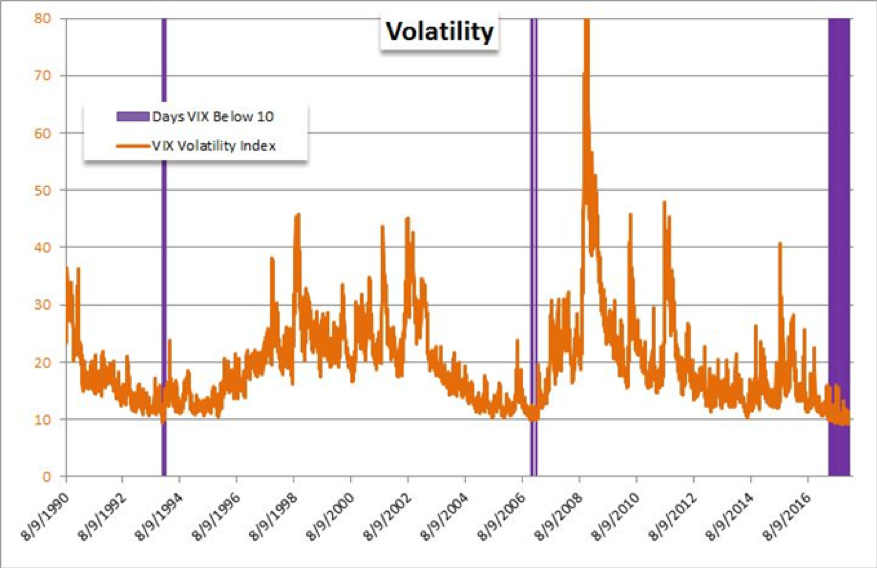 Despite the threat of a trade war between the U.S. and China, the likelihood of Italy defaulting on its debts or leaving the Euro, Brexit, India’s increased tensions with Pakistan, slowing growth in China, rising interest rates, and the end of loose monetary policy…

So perhaps it will have to be one of Donald Rumsfeld’s unknown unknowns, or Nassim Taleb’s black swans. These are dramatic events or changes which are unforeseeable. As Taleb shows in his book ‘Antifragility’, it’s impossible to predict how a complex system such as the global economy will play out.

Thus, the forecasting of commentators and analysts is often pretty pointless.

It’s much easier to see fragility in a system. That way, you can prepare for disaster, without needing to know what will cause it.

You might suggest stockpiling spam and gold bars during an arms race, without knowing what will spark the conflict.

In the current case – what we can see is that the system is fragile. It does not matter which of the many, many threats to the global economy causes a spike in volatility.

More important is to see that the short volatility regime underpinning the global financial system has made the markets incredibly fragile. It will exacerbate whatever it is that reintroduces fear and volatility into the markets.

Investors need to be aware that the stability of the markets is a mirage. In fact, it’s a reason for increased caution, not more risk-taking.

What’s an investor to do?

Forget stockpiling for Brexit, stockpile for the high-volatility regime of the future!

‘And what exactly should I be stockpiling?’ I hear you ask.

Over at Zero Hour Alert Nick Hubble has found a way to avoid getting wiped out in the next financial crisis. Check that out here.

James Allen, one of our energy experts, is recommending buying solar panels, too. You can find out more about that here.

And there might even be a secret new way to make incredible gains.

In fact, the entire Southbank Ideas Portfolio could be of use to you. Our job here is to offer a variety of new and important ideas, with the advice to match.