THE OLD SMITHY, STAFFORDSHIRE – “Stuff it under your mattress and you’ll make more interest” bellows a voice from across the pub. The suggestion is addressed to a gentleman seated on the opposite side of the room who’s been trying to deposit some cash at the bank.

Interest earned on deposits into a “Mattress Account” may be nil, but everything’s relative, and good luck finding a bank who’ll offer you a compelling alternative.

Remember the “innovative finance ISAs” launched five years ago? They were an Elastoplast stuck on the low-interest rate problem by George Osborne. The idea was that the everyman could earn some decent interest by lending his savings out in the real economy rather than keeping them in a cash ISA. This came with the risk that the business which borrowed your ISA money might go bust and default on the loan, with no protection from the FSCS to bail you out.

There are very few financial firms that offer IF-ISAs as they’re niche and quite risky; the scheme was not as successful as Osborne likely anticipated. But there are some, such as RateSetter, which pools the money from the ISAs together before lending them out. You can apply to borrow some of this ISA money to grow a small business, finance property development, or even just as a personal loan.

RateSetter pools together the interest and capital repayments on these loans, takes a cut, and then pays the rest back to the ISA holders at a pre-determined rate. All things considered, it’s a pretty neat idea.

Provided the lenders and borrowers know where they stand and the risks involved, it’s a platform for classic win-win engagement: a voluntary exchange of resources from those who have them to those who need them, to the mutual benefit of both. Happy days.

The max you could earn previously through their IF-ISA scheme was 4% a year, and that was if you’re ok with paying a fee when you pull. That’s now 2%, and will continue for the “Temporary Interest Reduction Period”.

It’s perfectly understandable that this is the case: they should be looking after their borrowers and providing forbearance during these trying times – it ain’t their fault that the government has decided to trash the economy and prevent business of almost any variety from taking place.

To me, it’s just an example of how the very idea of an “interest rate” that can be relied upon to grow our savings over time is dissolving before our eyes. The “innovative finance ISA” will not save us, dear reader. Only you can do that.

But, hey – it could be worse: you could be lending money to the Greek government. Remember them? You know, the really creditworthy guys?

If you think 2% is bad, get a load of this – 0.81% interest per annum on a ten-year loan. That’s the current going rate on a Greek government bond. All-time lows, baby: 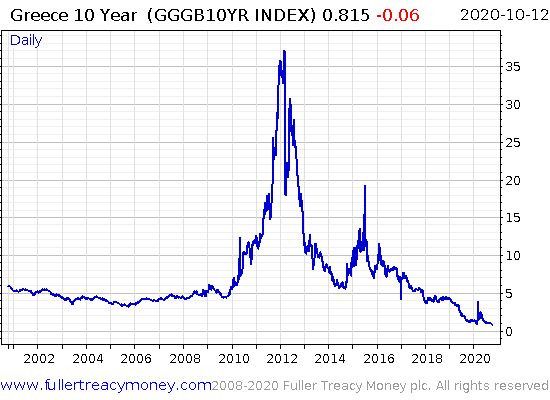 Just imagine being one of the guys eight years ago who bought Greek debt when it was paying over 35% per annum. If they’re still holding onto those ten year bonds today, they’ve still got two more years of the good times still to go!

35% per annum. Hot damn. But when those bonds mature in 2022 and you receive the repayment in full… what would you buy then? Indeed, what will the going rate be for Greek government debt in 2022? There’s probably room for a poll here…

Here’s what Bloomberg had to say to commemorate this “Greek Odyssey”:

It caps a dramatic turnaround for Greece’s bond markets, which saw yields soar above 40% during the height of the sovereign debt crisis less than a decade ago. Yet the nation isn’t alone among Europe’s periphery to have performed strongly since the coronavirus crisis. Central bank stimulus is inflating the price of safer assets and driving investors into higher-yielding and riskier securities…

Greece’s debt is still rated junk by the three main credit rating agencies and trading volume is just a fraction of what it was before the financial crisis.

Bank of Greece data show turnover on the electronic secondary securities market, or HDAT, totaled 4 billion euros last month, compared with a peak of 136 billion euros in September 2004. That can leave the market vulnerable to price swings.

Still, the rally is likely to keep going, according to Danske Bank A/S’s chief strategist Piet Christiansen, given that central banks continue to suppress borrowing costs in the face of the pandemic.

“Low volatility just makes Greece an attractive case in finding still-positive yielding instruments,” he said. “There’s no obvious trigger that should stop this.”

I think Nickolai Hubble may be able to think of a trigger or two. He’s been updating his work on the euro recently, with analysis on how the emergency WuFlu measures are changing the plumbing of the single currency, with its own host of unforeseen consequences and side effects.

You’ll be able to read his latest analysis when it goes live over at Fortune & Freedom, the new eletter he’s launched with Nigel Farage – you can sign up here.

For those caught on the wrong side of the euro crisis less than a decade ago, cash under the mattress really did pay more interest than in a bank. While we all hope that such a scenario doesn’t happen again there or here, wishing isn’t good enough.

It’s your personal responsibility to ensure that such a scenario would not leave you at the mercy of the financial authorities… for said authorities may not be feeling very merciful. Just ask the Cypriots who unwittingly paid for the bail-in of their banks with their deposit accounts.

That’s why we’ve launched Fortune & Freedom with Nigel Farage – to help you take back control of your money and keep it safe – no matter what the 2020s have to throw at it.