ABERDEEN, SCOTLAND – I was given a set of lockpicks for my birthday a few years ago. I’d always wanted a set when I was a kid after reading one too many adventure novels, and a relative of mine thought I was finally responsible enough to own a set. That, and they wanted help opening a chest of family heirlooms which they couldn’t find the key for.

They’re funny things, lockpicks. So simple in nature – just thin strips of steel. But manipulate them in just the right way, and all the world’s secrets can be yours. It’s alarming to discover just how simple some of the locks we use to protect our belongings, property, and ultimately ourselves and loved ones can be. So thin a barrier between our security and the will of an intruder willing to break it.

To most people one lock’s as good as another – most keyholes look the same after all – so they don’t think about it. But if your front door had a password (just give it a few years), would you set it as “Password123”, or “Open Sesame”? No. So make sure your locks and padlocks don’t suck.

When I first visited Rome many years ago, I was shocked at the security measures that everyday folks applied to their homes. Compared to the UK, it seemed excessive: the flat I was staying at was neither large nor extravagant, but you needed three keys to open the front door, and it was reinforced with a lattice of mighty steel bolts.

Youth unemployment proved to be the cause of such caution. It also helped explain the expanse of graffiti that stains such an otherwise beautiful city. When you consider that Italy is ranked 58th on the ease of doing business index (a measure of government barriers to entrepreneurship) right behind Kosovo and Rwanda, it’s sadly not all that surprising that jobless kids have turned to less productive endeavours.

What is surprising is that this is the case in a G7 country. Youth unemployment in Italy currently stands at 30%, which incredibly is actually a good figure by recent historical standards. Somehow, the youth unemployment rate was lower in 2020 – during the WuFlu – than it was from 2012 until 2019, where 40%+ wasn’t out of the ordinary.

As long-time readers of this letter will know, we believe the key to Italy’s woes lies in its currency. The Italian Problem is borne from the fact that its currency – the euro – does not rise and fall in line with the behaviour of its economy or of its government.

When Italy had the lira, which would rise during the good times and weaken during the bad times, the Italian economy grew steadily through thick and thin. But upon joining the euro, that all stopped.

The Italian currency was no longer working for the Italians. It no longer sent the price signals that would bring equilibrium to the Italian economy. And it would no longer devalue in crises to make debt burdens easier. It was stuck.

A strategist at Nordea bank called Andreas Steno Larsen published a brilliant chart recently illustrating this. The lira was key to Italy’s growing economy – when it was replaced with the euro, that trend abruptly stopped: 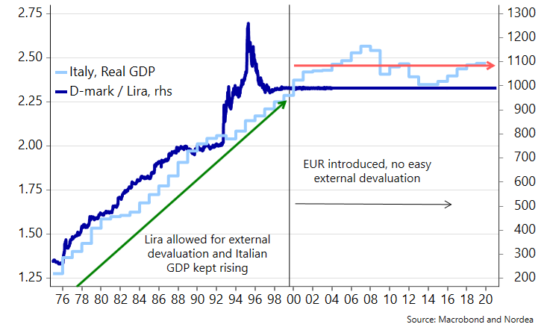 “Italy’s problem is not really debt, it is the EUR”. Italian economic growth in light blue, the lira/deutschmark exchange rate in dark blue
Source:@AndreasSteno on Twitter

The euro is a lock on the Italian economy. A return of the lira is the key that would remove it – but no such key is forthcoming. The lock must be picked instead, to bring back the Italian economy some other way – a job which falls to Super Mario Draghi, who having shed his central banker skin, now stands before the world wearing the flesh of a politico.

Good luck to him. That’s a lock I’m not sure can be picked – though I’ve no doubt they’ll try…

I’ll need to speak to our resident euro expert Nickolai Hubble to see what he makes of Draghi’s career transition from euro printer to euro spender. But in the meantime, there’s another kind of key I’d like to show you. It’s what my colleague James Allen is calling a “masterkey”.

Over the past year we’ve seen the incredible rise of renewable energy, not only as a political and media narrative, but in markets as well. Renewable energy stocks have gone on an incredible tear throughout lockdown – Just take a look at the $TAN ETF, which made up of solar energy stocks: 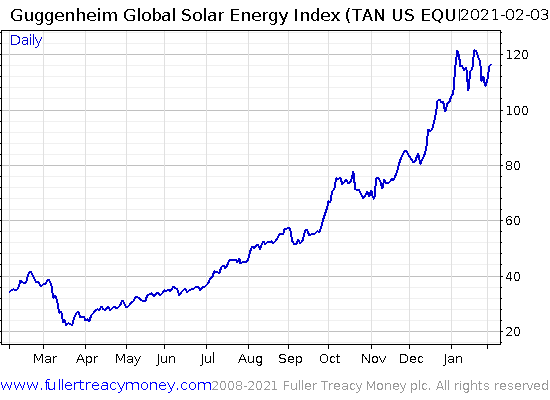 My colleague James was banging the table about the promise of renewable energy well before this year, and he’s – quite rightly – very chuffed with how his investment plays have turned out.

But to his eyes, there’s a problem: the renewable future which the market is getting giddy dreaming about simply isn’t possible without major advances in one key technology. While that technology is out there being developed, it’s so vital to the structure of a green future that the space is tiny compared to what it needs to be – and investors haven’t been paying it nearly enough attention… yet.

James calls it the masterkey because the door to a green future remains locked without it – and he makes a compelling argument that the market hasn’t clicked this yet. When it does though, you can expect to see a major boom in this sector – and that’s when you’ll want a masterkey in your portfolio. I’ll let James brief you on the details.